32 More Suburbs in Search of Their Names: An Etymology of Cities in the Inland Empire 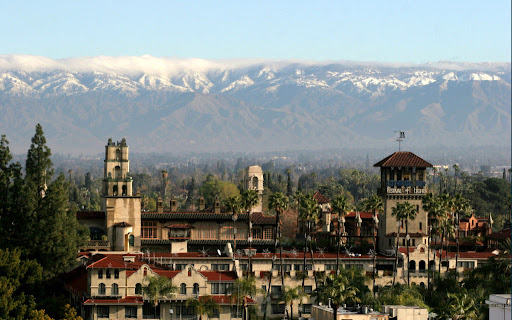 Wow, it's been a while since The Militant did something like this. Er, not just post something on This Here Blog Site that has nothing to do with an Epic CicLAvia Tour, but making a post about the name origins of places in Southern California.

It all started in November 2013, when The Militant made a pretty epic post about how all 88 of Los Angeles County's incorporated cities got their names. He then decided to follow it up in April 2014 with the name origins of Orange County's 34 incorporated cities (do read those if you missed them the first time...).

This time around, for some odd reason, he wanted to take on the Inland Empire, which is not a county per se, but a region of varying sizes and definitions. Most define the Inland Empire as two counties, some folks include parts of five. Since one of those counties includes the largest county in the United States in terms of geographical size (though the state of Alaska has county-like bodies called "boroughs" which are even larger), The Militant doesn't want to bother with having to go all the way out to MF'ing Zzyzx, so for the sake of this, and the relevancy to his (greater) Los Angeles jurisdiction, The Militant will define "Inland Empire" as "The parts of San Bernardino and Riverside counties that exist within the Los Angeles Basin and the greater Los Angeles Metropolitan Area that are not situated in the Mojave or Colorado deserts." So...Palm Springs, Victorville - you cool, but sorry, you ain't part of this.

The Inland Empire, a.k.a. The I.E. was actually known for years as "The Orange Empire," being part of a large swath of Southern California that included the San Gabriel Valley and Orange County known for its orange groves and citrus production. A regional annual citrus-themed fair called the National Orange Show has been taking place in San Bernardino since 1889. But the dynamics of the area had evolved over the years, as Los Angeles became more urbanized and the mass media market defined by radio, television, newspapers, transportation infrastructure and professional sports teams blanketed the region, the Orange Empire became more known as a suburb.

On November 14, 1992, a large part of the 714 telephone area code split off and became the 909 area code. That gave the suburban region east of Los Angeles anchored by the twin cities of San Bernardino and Riverside a much stronger regional identity, and the term "Inland Empire," (which dates back to 1914 as documented in the old Riverside Enterprise newspaper) garnered more usage locally and nationally (especially since a neighboring region had already gained more association with the name "Orange").

So while The Militant's previous two lists were limited to incorporated cities within counties, due to the nature of the I.E., this list will also include unincorporated areas and notable communities of incorporated cities. Because the Inland Empire is like that. Also, since Lake Arrowhead and Big Bear Lake are not topographically part of the Inland Empire, because of their recreational nature, they are just as connected to the Metropolitan Los Angeles area as the towns down below, so they made the list.

As typical with Southern California place names, there's a lot of Español, especially in terms of Mexican Rancho origins, as well as names of white dudes who founded that particular place, but there are also names of French, Italian and Danish origin, as well as indigenous origin, from the three Native American tribes in the region (as well as one well outside the I.E.).

So without further delay, and after much Militant research, here it is, the etymology of 32 places in the Inland Empire, in alphabetical order:

Big Bear Lake – The California grizzly bears that once lived in the area.

Chino - Originally part of the Mexican land grant Rancho Santa Ana del Chino (“Ranch of St. Anne of the Curls”); the “curls” refer to the curly grama grasses that grow in the valley.

Colton – David Colton, vice president of the Southern Pacific Railroad, the company that built a large railroad yard in the city that remains in operation today.

Corona – Spanish for “crown”; the nickname of the one-mile diameter circular road (Grand Blvd) in the town’s center.

Etiwanda – The Etiwanda Native American tribe, which lived on the shores of Lake Michigan.

Fontana – Italian for “fountain” or “water source”; located near the Santa Ana River.

Hemet – Named after the Lake Hemet Land Company. There are several competing origins on the name “Hemet,” including the local Native American word for “box,” and the Hemmet Brothers, Scandinavian immigrants who settled in the area.

Highgrove – Originally named East Riverside, was renamed in 1897 after the local orange groves and to give it a separate identity from Riverside.

Highland – The area east of San Bernardino, higher in elevation (300’) than the rest of the city.

Lake Arrowhead – Originally named “Little Bear Lake” (in reference to its fellow alpine reservoir to the east), it was re-named by the Arrowhead Lake Company after the natural rock outcropping overlooking San Bernardino that visually resembles an arrowhead.

Ontario – The Canadian province of Ontario, where city founders and brothers George, William and Charles Chaffey originated from.

Menifee – Luther Menifee Wilson, a miner who discovered quartz in the area in the 1880s.

Mentone – The town of Menton in southeastern France.

Montclair – Originally named “Monte Vista” in 1900, was officially named “Montclair” in 1958 as a result of a request by the US Postal Service to avoid confusion with the Monte Vista in northern California; also as a phonetic reference to neighboring Claremont.

Moreno Valley – Spanish for “brown;” a reference to Frank Brown, the co-founder of Redlands.

Perris – Fred T. Perris, chief engineer (as in designer, not train operator) of the Atchison, Topeka and Santa Fe Railway, who oversaw construction of the transcontinental railroad line between Chicago and Los Angeles along the Cajon Pass in 1885.

Rancho Cucamonga – The Tongva village of Kukamogna ("Place of the sand").

Redlands – The color of the local reddish soil, used for making adobe.

Riverside – Alongside the Santa Ana River.

Romoland – Originally named Romola Farms, the name was changed due to a request by the US Postal Service to avoid confusion with Ramona, CA.

Temecula – Temeekunga, meaning “place of the sun” in the language of the indigenous Luiseño/Payómkawichum people.

Upland – The area north, or “up land” of Ontario; also a reference to the height of nearby Mt. San Antonio (a.k.a. Mt. Baldy).

Yucaipa – Yukaipa’t, meaning “green valley” in the language of the indigenous Serrano/Taaqtam people.

My turn to be militant... in dispute with Lake Elsinore in being the oldest city in Riverside County, San Jacinto doesn't even get a mention? Yet Hemet, our bordering southern city, does? Yet Highgrove, "a census-designated place" (not even a city), does? What a dis! That's BS!

Thanks for sharing about coffee table designs. Your content is really informative for us......

Email writing is considered one of the important ways in business communication. The growth of the companies cannot be sustained if the company does not implement effective communication. The email writing includes the email address of the recipient and the subject for which it has been written.
Emailing a professor should be straightforward. You send emails all the time. Professional email etiquette is not something that is often taught which makes sending that first email all the more stressful. These tips will help you write my assignment that is appropriate and gets an answer.
Salutations: Start your email to your professor with a Dear or Hello. Hey is too casual for this situation and some professors also think Hi is too informal. The growth of the companies cannot be sustained if the company does not do taxation law assignment help. The employees may be discouraged and lose the opportunity to grow if they do not show good formal communication.
The Title and Name: The salutation must be followed by the professor’s title and name. This might seem overly formal to you, but it is an important way to show respect for your professor and their position and training. Omitting the title or using the wrong one could inadvertently offend your instructor.
Provide Context: Some professors have hundreds of students and may need some context to be able to place you and answer your question. This is especially true if you’re emailing them for the first time. The easiest way to help them figure out who you are is by telling them which of their classes you’re in and which day your class meets.
Keep it Short: Professors get a lot of emails so make sure your request is simple and to the point. State your question clearly so your professor doesn’t have to take expository essay help to figure out what you want. You can also cut down on the number of emails required to answer your question by briefly listing the steps you have already taken to try and answer your question.