K, so you've ridden Metro's brand spanking new light rail line. And you've just learned about 19 points of interest along the route from some Militant guy on teh Interwebz. Now what?

Fortunately, the Metro K Line runs down a corridor full of wonderful eating options. From hot dogs to desserts to soul food to ice cream, and even a nice microbrew, there's lots of culinary discoveries to be found along the K.

All of the eateries listed are independently-owned/run eateries. No chains, unless it's of local origin or significance. All listings are within a half-mile (6-block) walk of a Metro K Line station (And although it wasn't a requirement for this list, all but two of these businesses just happen to be Black-owned).

The listings for the Leimert Park and Downtown Inglewood station areas just barely scratch the surface; those two areas (especially the latter) could warrant their own location-specific food guides of their own. And surely the K Line will bring in new eateries within the foreseeable future. This guide is by no means comprehensive - it's just a starting guide to the bevy of restaurants accessible along the Metro K Line.

There isn't too much in the way of street food along this stretch of Crenshaw, but this converted U-Haul truck parked near the Crenshaw Square shopping center sign sells hot roasted peanuts by the bag. Though unsalted, they're freshly roasted that day and taste like nothing else. Where else in Los Angeles can you find hot, roasted peanuts on the street? Steven Conway, the vendor who has been operating this business for nearly 20 years is here 6 afternoons a week (closed Sunday) and also sells pre-packaged peanut brittle, almonds, cashews, pecans, walnuts and pistachios.

Brothers Cary and Duane Earle have been in the hot dog business since 1984, operating a street cart that became a brick-and-mortar presence on Crenshaw since 1992. Excellent hot dogs (standard, turkey and vegan options), chili dogs (standard and vegan) and chili fries.

Extra props to the establishment who literally sacrificed themselves for the K Line (their previous location was demolished to build the Expo/Crenshaw K Line station up the street), so show them some love! Duane is a frequent presence who even serves and works the cash register. In the '90s he was also known as Don Jagwarr, the ragamuffin MC who guested on Ice Cube's 1992 track "Wicked." Don't come Sundays, since they're closed, but do come on Saturday afternoons - it's a literal party atmosphere with DJs and lowriders outside on the parking lot!

Though the Baldwin Hills Crenshaw Plaza has a requisite shopping mall food court, it's best to skip it altogether and head towards the south side of the mall on the ground floor where you can find Southern Girl Desserts. Run by Florida natives Catarah Coleman and Shoneji Robison (who call themselves "The Dessert Divas"), they won Food Network's Cupcake Wars competition with their signature Chicken & Waffle Cupcake and used their experience in cupcake warfare to open Southern Girl Desserts. Other cupcake flavors of note are Hennessy & Coke, Pecan Pie and Peach Cobbler. They also have standard (and still really excellent) standard cupcake varieties like Red Velvet, Sweet Potato, Double Chocolate and Vanilla. Speaking of Sweet Potato Pie, they also serve up some of that as well as Pecan Pies in mini sizes, and for full-size pies, you have to order in advance. They also make excellent cakes and cookies.

This acclaimed Californian-meets-Soul-Food-fusion spot located behind Baldwin Hills Crenshaw Plaza is all the rage for Sunday brunch and evening Happy Hours. 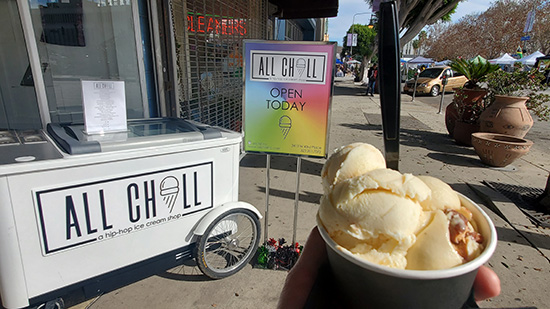 Located just steps from the K Line Leimert Park station entrance (turn left) is All Chill, which bills themselves as a "Hip-Hop Ice Cream Shop." No, you won't find gimmicky-named flavors like "The Notorious F.I.G." or anything like that, but they do serve unique "craft"-style flavors (the Whiskey Praline is a MUST here) in a store setting that doubles as a hip-hop memorabilia museum, replete with concert posters, photographs and artwork adorning the walls. In business since 2020, they're open weekends only, so you might not see them during the K Line's opening day, but if you're here for the African Marketplace on Sundays (which has a collection of notable food stalls in itself), definitely check them out.

Open since 2004, this has been The Militant's go-to for Jamaican food in Leimert Park. The Jerk Chicken (and other variations) are excellent here, as with their Jamaican Patties appetizers. But their vegetarian dishes are worth trying as well, especially their Jackfruit and namesake Ackee (Jamaica's national fruit) selections.

As you can see, hot dogs are a thing not just along Crenshaw but in this part of town. Just a couple miles southeast of here stood the legendary Art's Famous Chili Dogs on Florence and Normandie from 1939 until two years ago. Jordan's (which closed their doors during Art's closing day in March 2020 out of respect) carries the chili dog torch in this sector of South Los Angeles. With a far more robust menu than the specialty-based Earle's up the street, Jordan's also serves burgers, patty melts, BLTs and pastrami sandwiches. When in doubt, get the classic Harriet's Special, a chili dog and chili cheese fries combo. And if you're not already chili-cheese'd out, the Chilli Cheese Fritos are a must as well. And do try their Chiller Diller, a combination slush/ice cream shake fusion in various fruit flavors.

It's pretty hard to beat this Southern-style pit BBQ institution that's more than worth the wait in line for. Serving up barbecue ribs, chicken, beef and links, along with the mandatory sides since 1975, every Angeleno needs to go to Woody's at least once in their life. If you're not here to pick up a massive platter for your party or gathering, then a sandwich or lunch special will still suffice, at least more than enough.

For you early risers, this Louisiana/Southern breakfast establishment run by Creole chef Marilyn "Red" Wallace has got what you want and more just across Florence from the Downtown Inglewood station. There's no dine-in service; the food is take-out (you can call in your order or order online for pick-up), but there are outdoor tables for eating. Their Jambalaya Omelet is considerably-sized and can probably suffice as the only meal you'll have that day.

Just two blocks south of the Metro K Line station, Downtown Inglewood has their very own sandwich deli and it's pretty awesome. Home of their signature  Lucy Mae Air Fried Chicken Sammiche, their soups, salads and smoothies are also well-regarded.

Note: Downtown Inglewood has a large number of restaurants within walking distance south of the K Line station, including Inglewood branches of Hilltop Coffee + Kitchen and Dulan's Soul Food Kitchen (the main Dulan's on Crenshaw is currently closed for rebuilding/remodeling), as well as a number of African and Carribbean restaurants worth checking out. 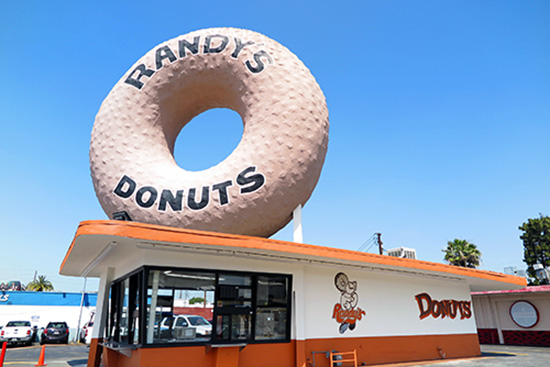 Although it's rapidly grown to a national franchised chain of 34 locations, this eatery, which specializes in loaded french fry (and The Militant means loaded) dishes had its humble beginnings just 6 years ago in Gardena. Owned by spouses-entrepreneurs Craig and Dorothy Batiste, Mr. Fries Man began in 2016 as a food truck whose loaded fries gained viral popularity via the Instagram platform. With around eight locations in Southern California, this is only one of two that are Metro-accessible (the other is their USC location on Figueroa, just south of the Metro E Line Expo Park/USC station).

So you've arrived at the end of the K Line. Now what? You can't visit the airport (yet), you can't tranfer to another Metro line (yet). So what's to do out here? Well, you cross Florence Avenue at Hindry, walk one block west to Isis Avenue and have some brews at this local craft brewery with over a dozen beers on tap and enjoy them in the outdoor dog-friendly beer garden. There's no food served here but food trucks are parked outside regularly.

Whatup! Did you enjoy this food guide? Are you excited to try out some of the eateries listed here? Kindly show The Militant some support via his PayPal donation page! A Militant's gotta eat, ya know (and your support will guarantee there will be more of these food guides to come)!

Commandeered by Militant Angeleno @ 2:34 AM


This blog in very informative for us