"Life is Good in Hollywood" I was going to inaugurate this blog with some grandiose, and equally verbose prologue explaining this blog and how it's written not just from a Los Angeles native's viewpoint, but from the perspective of someone who participates in the community, etc. etc. Of course I thought of that months ago when I decided to create this blog, and thus time spent thinking equated into no time actually doing.

So I'm gonna jump into this feet first, cold turkey and countless other euphemisms.

Sitting In The Park

But yeah, life was good in Hollywood today. Being just 2 miles from home and within my 5-mile bicycling radius in my personal gas/traffic-saving program, I biked to the Hollywood Chamber of Commerce building on The Boulevard next to the Roosevelt to attend a stakeholder workshop for the proposed Hollywood Freeway Central Park, the plan to cap the 101 with a 34-acre greenway and recreation area, filling just part of the dearth of park space in the Hollywood area, which currently has less than 3% of the City standard for park space (Even with the park,only 1/3 of our park space deficit would be fulfilled).

The meeting was put together by Don Scott, chair of the Hollywood Central Park coalition, and coordinated in conjunction with Southern California Association of Governments (SCAG) and the Portland, OR (hey, I dig em already)-based Fregonese Associates, the planning consultant for the project.

Fregonese's presentation was a slick PowerPoint, showing before-and-after CGI renderings of what could be and seemed highly inspirational, save for some of the towering developments and depictions of rather Aryan-looking folk in the pictures (the consultant recognized this, and attributed it to the Swedish-based firm that made the software).

The presentation also brought up some interesting facts that piqued my militant interest:

The rest of the meeting had us split into three groups and analyze the map to come up with some suggestions to shape the community's vision. Ideas ranged from parking facilities, a bike/pedestrian path between the park and the Hollywood/Western (M) station, an overlay zone (pioneered in NYC) to mitigate the effects of gentrification and allow longtime residents the ability to buy property in the area, banning commercial structures along the park, a sloping topography to allow for pedestrian/bike path bridges to cross over major thoroughfares, an Armenian Genocide Memorial (especially if portions of the project are ready by 2015) and more. Just when the ball was rolling, they called time. The next meeting would be sometime in July with a larger community meeting in September.

Of course this Militant Angeleno who lives in the park-deficient confines of the Hollywood area supports the park, and if done right can really transform the community, especially re-claiming the neighborhood fabric that was destroyed when the freeway cut through over 50 years ago.

Got My Juices Flowin'

While biking home I passed by some happy tourists on the perfect Los Angeles sunshiny day, snapping their cameras on the Walk of Fame, the El Cap and Ho-Hi. Then just before Vine, I came across a familiar sight: 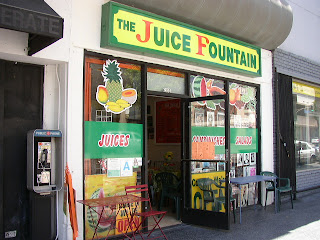 To my delight, the wonderful Hollywood institution, The Juice Fountain, had survived its relocation (to make way for the gargantuan W Hotel Hollywood project) and is now located on The Boulevard (6332 Hollywood Blvd to be exact). It's not the shack anymore but the place is filled with the aroma of fresh fruit, and most notably, the blended fruit shakes are still there. Surely in this age of Jamba/Robeks I could have biked a few more blocks to get a smoothie fix, but this is a true Hollywood institution, anointed by Sir Huell of Howser (a photo of the filming day adorns the walls) and is still serving the community, so I felt they were more than worthy of earning my money today. I got the #1 shake with strawberries, and a bag of veggie chips.I told them I was glad they were still in business.

As I pedaled my bike ride home along The Boulevard, I felt hope in a greener future and the present smiling on me like the sun on this clear day, I had an Ice Cube-esque epiphany: "Life is good in Hollywood."

Some other pics along the way: 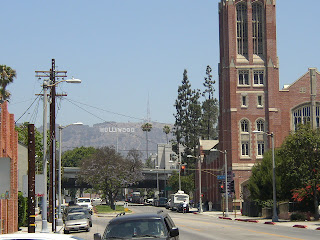 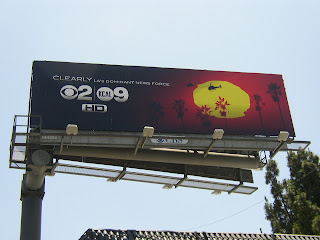 Hola! I love your blog and I love LA. I´m spanish, I don´t know english well. Last summer I went to LA and now is my favourite city in the world. Hollywood freeway park is very interesting for Hollywood. But the proyect is aproved? Or only is a proyect? When it finished the park?

Sorry for my english. Bye!

Muchas gracias, **lax**! El primero comentario por mi blog! La parque es una propuesta solamente, it has not yet been approved. Right now there is a study being done to see if it can be done, only after that would we know if the park would be built or not.

Found you by way of the Nerd, looks like this is going to be a regular read for me! BTW, your 'about me' is kick ass!

el chavo! - Gracias, Kamsahamnida, Salamat, Merci, Shenorhagal em, Xie xie, Arigato, Danke, Thanks. Good to know there's some other militants out there. I'm just your everyday Militant Angeleno, trying to survive, educating the masses and freeing them from the oppression of East Coast Colonialism!

Hey there! Just found you via Zach over at LAist, and I wanted to say I like your style! Taking the time to recognize those tiny but beautiful pieces of an ordinary day in sunny L.A. is one of the joys of my life, and I'm glad to see you doing it here with nice photos and a humor-filled attitude. :)

Glad to meet another bike rider! I ride my bike whenever I can - during the winter when it's not boiling hot, I'll go 10 or 15 miles on the bike.

Anyhoo, love the blog and I'll be back!

Even though not signed with Google, they know me well....call me Philpalm who is curious about the overly influential EastCoastlites.

I read that you bike and take the bus, but I bus and scooter(kick type) mostly and will be trying to electric scooter more...

Anonymous sez:
I read that you bike and take the bus, but I bus and scooter(kick type) mostly and will be trying to electric scooter more...

Very cool. Seriously, we should start giving those who choose not to drive on the roads a big hug, or at least a dap or a high-5. I mean do we really need more cars on the road?

I dunno, is NY the only city that has buses? You probably ween't aware that decades ago, Los Angeles had an even larger mass transit system (the Pacific Electric Railway and L.A. Transit Lines) than NYC does. Militant Angeleno doesn't want Los Angeles to "be like NY," but rather claim back something that was spuriously taken away from us.

Hello,
A quick introduction from my end-Iam Chinmaya from Bangalore,India. The reason for my mail is that I understand that the "Sons of the Desert" are having their next convention at Hollywood later this year and would want to know if you are attending it. You may check this for more details- http://www.laurelandhardywood.com/ .

Incase you or anyone whom you know are,please let me know as there are somethings that i want to discuss regarding transport and accommodation.My id is chimayaprakash@gmail.com Else,you may ignore this.