The Bike Path To Summer 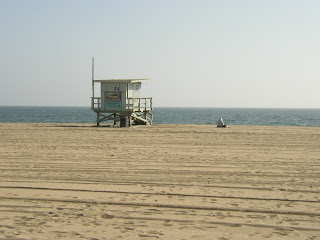 Although Memorial Day weekend was over a month ago, and the Summer Solstice came and went last week, for this Militant, it's not Summer until I visit the beach. Having some work responsibilities wrapped up by early afternoon, I found a unique window of opportunity to hit the coast on Thursday.

Since 1993, I've inaugurated the arrival of Summer with a ride down the 22-mile South Bay Bike Path.

Despite the beach being outside my driving ban territory, I still decided to save some gas anyway by taking advantage of Metro's new Rapid Line 704, which supposedly gets me to Santa Monica in an hour. To my dismay, the bus wasn't on time (or maybe I missed the last one?) and it wasn't a fancy red-colored bus, but rather a regular poppy-orange Metro Local with a "704 Santa Monica" headsign. Nevertheless, the bike went on the front rack, the iPod went in my ears, and I was on my way.

It did take about an hour to reach the beach, not bad. I disembarked at Colorado and started pedaling, passing the throngs of digital camera-snapping summer tourists outside iconic Santa Monica Pier sign, crossing the curiously-named Moomat Ahiko Way -- which is native American Chumash for "Breath of the Ocean" and not after some Arab-Japanese fellow as I had previously thought. Within a few minutes, I was finally on The Path. 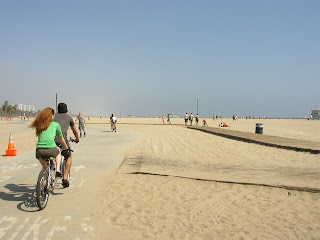 My destination, the end of the path at Torrance County Beach was a virtually-unseen point in the distance, past the slight haze created by coastal moisture. Riding on the path during the summer is a unique experience; the sum beats down on your back and arms yet your face is cooled by the moist sea air, rewarded frequently by the delicate coastal breezes. The experience is just not the same during the winter, where it's considerably colder, and the flat, spanning aesthetic of the beach is dramatically altered by storm berms bulldozed in the sand. Yes, I can always come here in the winter, but I don't like to.

Having breezed past the Venice Boardwalk on my summer bike rides on The Path, I decided to play "tourist" and simply walk my bike along the Boardwalk (a misnomer since it's simply pavement). It was my first time on the actual Boardwalk since helping a friend visiting from Philadelphia realize her dream of rollerblading in Venice Beach a decade ago (for my newbie rollerblading ass though, it was a muscle-aching nightmare). Sometimes I wonder what it's like to be a tourist. If all I saw of Angelenos were stoned-out smelly dudes strumming guitars while selling ersatz paintings or hawking henna designs, I might not like this town all that much. Although I must report that I spotted the Silver Lake Walking Dude of all people, in all his sunburned glory, here on the Venice Boardwalk, well outside his home environs.

After Venice Beach, I got back on the bike and rode through the "street" segment of The Path, crossing one of Abbot Kinney's few surviving canals and navigating the perimeter of Marina Del Rey, finally reaching a dedicated bike path again where it junctions with the Ballona Creek Path. I think I'll shut up for now and let the pictures speak for themselves: 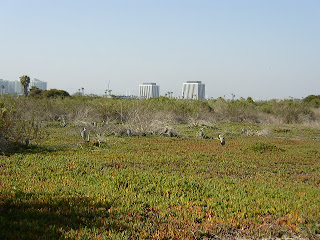 Gigantic crane birds (center) hang out in the Ballona Wetlands --
the last piece of land untouched since the native Tongva tribe roamed the area. 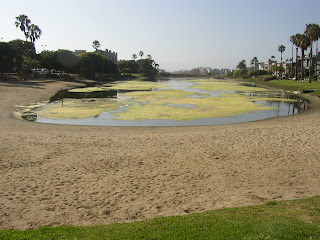 The Del Rey Lagoon, just south of Ballona Creek,
is the last vestige of a large span of marshland
that would eventually be dredged to create The Marina. 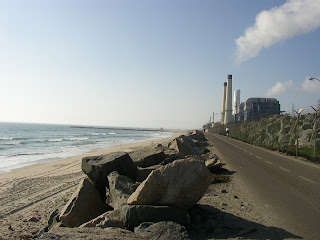 Looking back north, The El Segundo Power Plant hums and churns
while surfers ride the waves just yards away. 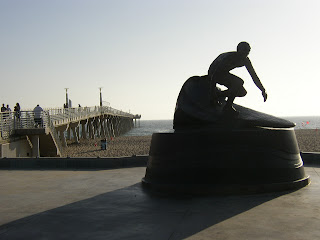 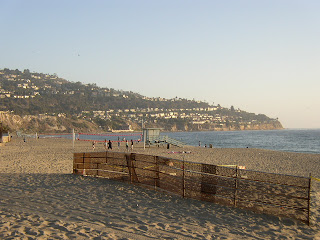 The path ends here, next to the fortress-like cliffs of the Palos Verdes Peninsula. 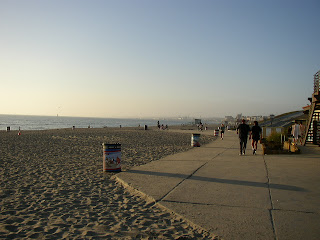 Looking back, to think I came all this way.
Santa Monica can hardly be seen in the distance. 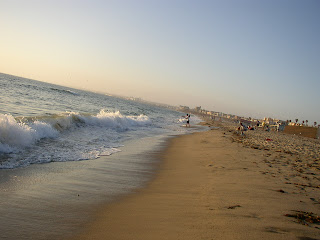 The sand, the surf, the foam, the kelp, the easy feeling of a
summer evening in Southern California. 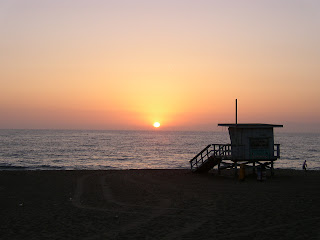 When the sun sets over the Pacific...
My Summer initiation ritual is not complete without baptizing myself in the waters of the Pacific (okay, just a knee-deep wade would suffice this time), reminding me that I've completed my journey, and forming a connection to my ancestors who have similarly waded the other side. As the sun set, some music provided by the iPod orchestra completed the mood, of a day finishing off its business in this part of the world.

Now time for the journey back.

With night approaching, the environment suddenly changes, and it's not necessarily for the worse. The moist sea air embraced me like an invisible blanket, keeping me relatively warm as I speed through the cold of night. Pier lights served as decorative strings jutting out into the dark, unknown expanse of the ocean. As I raced back towards Santa Monica and the receding layer of remaining post-dusk sunlight fades into bands of orange and purple, the bonfires of Doheny State Beach formed seemed to form their own runway perpendicular to the paths of jet planes roaring above. 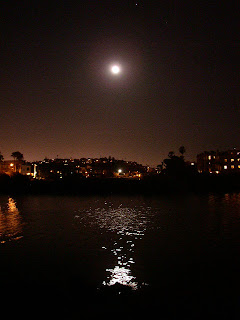 Come 9 p.m., in the dark, unlit expanses of Playa Del Rey, I felt like a western Pioneer navigating towards unknown territory, with only a small bike light guiding my way. Daunting, yes, but really very exciting. The full moon also provided quite a sight with its light reflecting on the waters of Ballona Creek (photo right).

But once I reached Santa Monica, the quiet solace of the beach at night ended suddenly, with the lights of the Pacific Park blaring on the Pier and throngs of people walking around both on the Path and on the sand. The energy of this beach continued as if the sun had never set. A free valet service was set up to accommodate people's bikes next to the path, and the lot was mostly full.

Navigating the Santa Monica streets by the 3rd Street Promenade, I had long left the dark, silent solitude of the beach at night and was back in the city again, waiting for the 4 bus to take my bike and my tired Militant self back home.

When Ya Gotta Go, Go Metro! 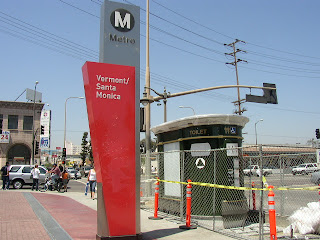 Looks like the automatic pay toilets have hit my hood. A brand new Metro Latrine is being installed at the Metro Rail Vermont/Santa Monica station. About time, I say. Maybe the Metro Bus stop across the street won't reek of urine anymore. A week ago, the news racks were removed from the site, a rectangular hole dug out of the pavement and a large concrete base installed. When a water main was spotted protruding from the base, I knew it was Potty Time. The toilet, an off-the-shelf model by international street advertising company JCDecaux is identical to ones seen in Downtown, as well as in Frisco, Chicago and Paris. 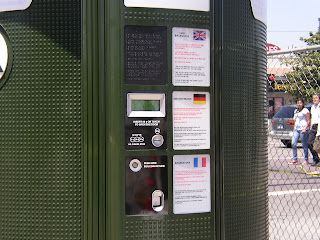 A closer look at the pay toilet gave way to a definite nod to Los Angeles' rich diversity. Instructions on how to use the toilets are also given in German and French (pictured left), because, we all know that Los Angeles is famous for its large Deutsch- and Français- speaking immigrant communities. Oh well, it doesn't matter what race, ethnicity or nationality you are. You might be an American outside the toilet, but inside... You're-A-Peein.'
Commandeered by Militant Angeleno @ 6:39 PM

Yo, Militant! Love your writing and your blog. Refreshingly different from the usual Silver Lake/Los Feliz "hipster blogging scene." Great photos, too. (PS, thanks also for adding me to your blogroll.)

Yo Michael -
Do tell me more about these Silver Lake/Los Feliz hipster blogs. I mean, I really want to know where they buy their vintage '70s ringer t-shirts -- all of them size medium of course.