Sunday Rally Sunday: The Dodgers Kick Off The Playoffs 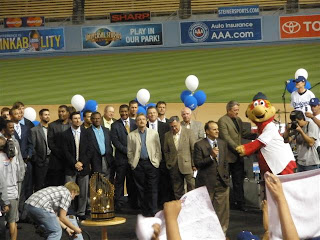 The Militant joined about 10,000 fellow True Blue Dodger fans at the Stadium on Sunday evening for a rally to usher in the 2008 postseason.

Though parking was free, the Militant didn't want to deal with any parking mess, so he opted to take the Metro bus instead, and walked it up Elysian Park into the stadium. Interestingly, despite the crowd, only about a fifth of the entire parking lot was taken up. 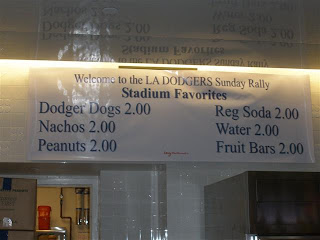 The fans were similarly treated to other perks: $2 Dodger dogs (and grilled, at that!) and other food items ( pictured left) for that price, free posters and calendars, free field and loge level seats and the free throwing of beach balls without the usher puncture.

A stage was set up over the visitor's dugout and a good 1/5th of the stadium was filled up, all on the first base/right field side. The 1981 and 1988 World Series trophies were displayed like sacred relics. A mediocre classic rock cover band played (the media reported that native Angeleno songwriter extraordinaire Randy Newman himself would perform "I Love L.A." live, but apparently it never happened, damn..). Dodger legends from the early years (Don Newcombe, Maury Wills, Sweet Lou Johnson) and a trio of Los Angeles natives who all played on the '81 world championship team (Kenny Landreaux, Bobby Castillo and Derrell Thomas) spoke about their experiences and commented on the current team (a certain former Dodger by the name of Gibson was also announced prior to the event to show up, but oh well...). And an 81-year-old Tommy Lasorda spoke like a fiery reverend, preaching the gospel of Dodger Blue to a revival crowd (and yes, he even had to come to the defense of the beleaguered Andruw Jones).

The highlight of the night was, of course, the 2008 National League West Champions themselves, returning from a losing-but-what-does-it-matter-anyway series in Frisco. The emcee gave contant updates on the team's whereabouts (in the air, just arrived at LAX, on the bus, on the 105, on the 110, on Sunset...). 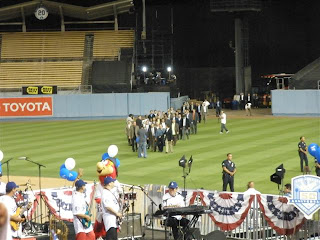 Finally, the front end of a charter bus peeked into the centerfield area, and a group of finely-dressed men in suits walked out and marched through the outfield towards the stands in dramatic fashion (pictured right). Torre, Colletti, Monday and Jarrin (Interestingly, no Vin Scully...) headed the delegation, followed by the players themselves: Garciaparra, Furcal, Ethier, Maddux, Ramirez, of course, and the rest of the team. To say the crowd went nuts was an understatement.

It was a largely civil event, mainly because unlike previous postseason rallies (The Grove in 2004 and Universal CityWalk in 2006 -- and yes the Militant was there for both of them as well), people didn't have to endure long waits on their feet. Of course in the 2006 rally, the Militant met his childhood hero Steve Garvey, and was on television for a few seconds (you'll never know, of course...). The only snag here was crowd flow problems in the field level: There was only one entrance (and exit) and people moving to and from their seats had to cross the long-ass concession lines (so what's new...okay, besides the low prices). It also took a good 15 minutes to get out of the actual stadium structure because of the limited access points. But everyone was civil (except for the one dude who decided to run into the field (after the program was over) and was inevitably manhandled in a prompt manner by several LAPD officers. 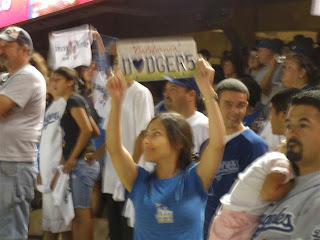 The Dodgers face the Cubs starting Wednesday. Will they make it? Or will they get eliminated? Hard to say...the Cubs have been strong, but this certainly isn't the same team that they beat in May and June. The Injuries That Matter aren't an issue (we can certainly do without Jones and Jason Schmidt of course, lol), which results in a team with lots of depth and lots of options for Joe Torre. And the Manny Factor needs no mention. Lowe, Billingsley and Kuroda form the formidable rotation for this series (with Kuroda pitching at the Stadium for game 3, of course), so consistency is key for them. All the Militant has to worry about is winning more than one game, ...and scoring tickets for Saturday's match. GO BLUE and BEAT THE CUBS!!! 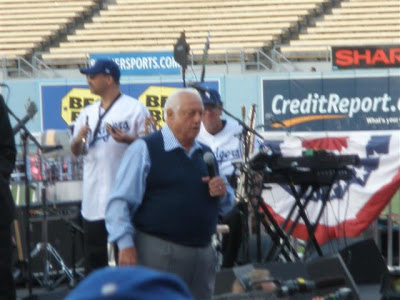 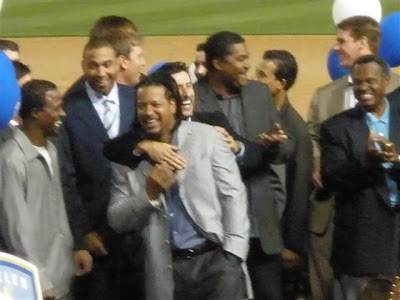 Nomar and Manny share a laugh, after the dreadlocked one says, "We're gonna win it all...if not, you're gonna have to bring me back next year!" 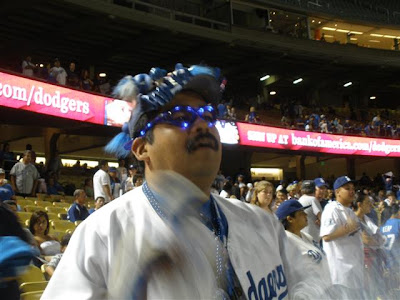 Fans go all out in Dodger pride. 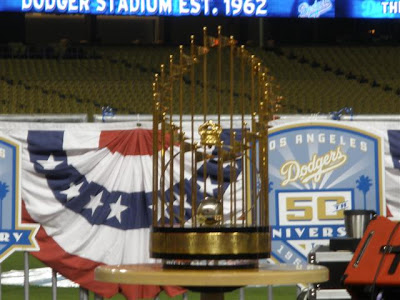 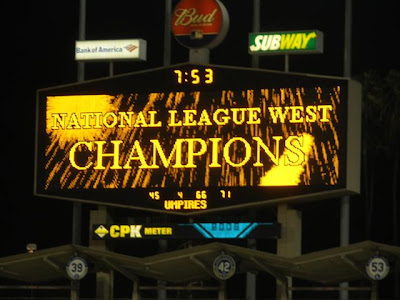 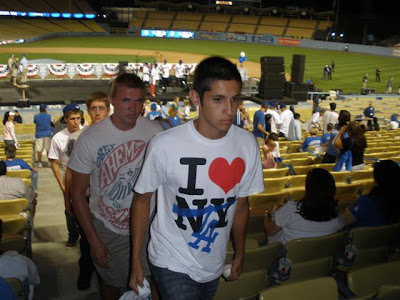 Love the shirt.
Commandeered by Militant Angeleno @ 1:03 AM

The image of Lasorda as a preacher reminds me of the South Park episode when Cartman is a preacher, complete with cussing!