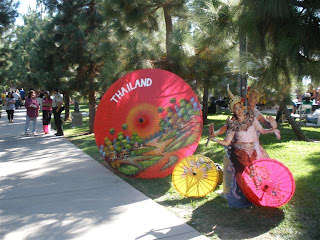 Sunday in Los Angeles was a huge-ass mutha of a day in terms of our multiculturalism. So much, that even the Militant couldn't even cover it all. There was Thai Cultural Day in Barnsdall Park, L.A. Commons' BBQ Adventure in Little Armenia, a Central American carnival on 7th Street in Westlake.

Ultimately the Militant settled on Thai Cultural Day, not only because of its relative proximity to the Militant's compound, but because one of the Militant's Thai community operatives invited him personally to attend an historical moment in the community.

In July, Los Angeles' Thai Town was given a nationally-recognized designation as a "Preserve America" community. That designation is a federal initiative, overseen by First Lady Laura Bush to support and recognize localities across the U.S. that preserve its cultural heritage.

Obviously you would think that various East Coast burgs named after battle sites that pop up in the Revolutionary or Civil War chapters of high school history books would be the sole recipients of such a designation. And they were probably the first ones named. But to have the federal government - mind you, a bunch of suits in the D.C. Beltway - recognize the part of Los Angeles known for silk shops, massage spas, pad see ew and Thai Elvis as a culturally-significant slice of the US of A is a HUGE deal. Heck, recognizing any part of Los Angeles in that way is a huge deal.

There are some people who dare call themselves "Angelenos" who aren't fond of the cultural enclave thing. They say it's "exclusive." They say those communities "build walls." They claim their denizens inherently "breed criminal elements." They believe such designated ethnic communities "discourage assimilation." They maintain such communities "divide" us.

The Militant knows they're all wrong.

Those kinds of people fail, or refuse to recognize that these communities never actually shut people out. Exclusive? These are low-income communities. The last thing they want is for others to stay out. Building walls? They build bridges. Criminal elements? Sometimes, but that's only because the powers-that-be want these places to be out of their radar. Discourage assimilation? Uh, these places are where assimilation begins (Los Angeles used to have a "Little Italy," which all but vanished because assimilation went a little too well). Divide? Why not see what these places have to offer -- they'll probably teach one that we're more alike than different. The only ones doing the "dividing" are the ones who shun these places out of fear. 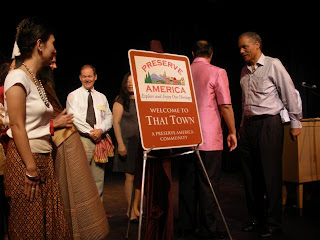 The Militant's Thai community operative ezplained to the Militant that the application process for this designation was no easy feat, but Thai Town's application had enough substance to convince the feds that this was the real deal.

On Sunday afternoon, in the Barnsdall Gallery Theatre, a two-hour program featuring various politicos (Assemblyman Kevin De Leon, Supervisor Zev Yaroslavsky and Councilman Bernard Parks), various representatives and other community folk culminated in the unveiling of one of the signs (pictured right) that will welcome those who enter Thai Town in the near future, reminding them that this place is a "Preserve America" kind of community.

But aside from signage, these communities are also entitled to special federal grants for community development and tourism efforts. Thai Town may have been designated by the City nine years ago, but it's still a dynamic work in progress, especially in these economic times, and most especially since only two buildings in all of Thai Town are actually owned by Thai American entities.

Most Angelenos know that these ethnic communities are the benchmarks of our City's diversity. But for them to be recognized on a national level means so much more than pretty aluminum signs and a few redevelopment grants here and there. It means that they are benchmarks of this entire nation's diversity - forged right here in Los Angeles.

Though despite the federal accolades, it'll still be months before you'll see the signs go up on The Boulevard. See, there are these city signage ordinances that need to be followed, and another lengthy application process to get signage put up...and a budget to have the City install them...Yes, friends, City Hall can give you an even harder time than the White House.
Commandeered by Militant Angeleno @ 1:10 AM