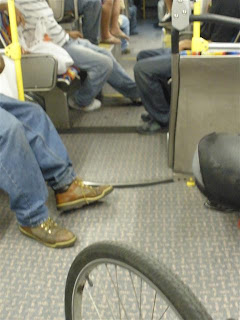 Much has been discussed recently about bicycles and the accommodation of cyclists on the transit vehicles of our region. The Militant recently took a ride on the (M) Orange Line busway, and on a late night ride back to the North Hollywood Metro station, he saw that the approaching bus' front rack, which can take three bikes, was full.

He paused there, wondering if he had to wait for the next one, or just pedal it east (at this hour of the night he didn't wanna miss the last train out) after the Militant said, "Can I..." to the driver, she pointed towards the back of the bus. Relieved, the Militant loaded his bike onto the front door, but soon heard her negatively nod, "Uh-uh!" - but that only meant that he was to load his bike through the rear door.

He had never brought a bike inside a bus before, so he snapped the above picture to capture the historic moment (rear wheel shown of course to conceal both the Militant's and his bike's identities). Other cyclists have alluded to this, and now the Militant was able to try and confirm it himself.

Thing was, he stood the whole while, holding the bike upright, and had to move it aside whenever the rear door opened to allow both boarding and alighting riders, and the swing of the door (they don't slide elevator-style like the trains do). But duuude. It's a bike. In a bus.
Commandeered by Militant Angeleno @ 1:45 AM

Markp: Thanks. Nice poem, too.

we discussed this issue years back, but neither MTA nor NABI volunteered to devote the Rotating Tray in the Artics, at least one side of it, to a well designed bike rack, which I just saw in Germany accommodating up to 7 bikes on each side. That is 14 bikes. The rear door (middle front in our condition) is clearly identified with a bike logo, and the Germans do it so swiftly, all ages, sexes or types of people, I have not seen a single exterior rack on a bus in Germany, yet there are more bikers per capita than LA for sure, or the USA in general. Why are we paranoid obout every issue when it can be resolved by GOOD DESIGN to begin with.

Yaarchitect: Any links to pictures?

As a governance councilmember for Metro San Fernando Valley, I can speak to this authoritatively.

The policy is that at night, when Orange Line service operates at longer headways of 20 minutes (meaning the usual rule of "wait until the next bus if the rack is full" creates a significant delay for the customer), the operator has the discretion to allow bikes to be carried in the area immediately adjacent to the farthest back door, if there is a sufficiently low ridership (i.e., no standees using that area) to allow the bike to be carried safely without impacting passenger boarding or discharging.

As for "yaarchitecht"'s comment, I know of no formal discussion at Metro along the lines of his proposal, so I must presume said discussion did not take place in any official capacity. On a blog, perhaps, where comments are not necessarily read by agency officials?

Yesterday, I was traveling in a group of three and needed to catch a local bus at around 10:30 pm, which was the last one for the night. We were at the start of the line and there was only only one other passenger waiting at the stop, and the driver let us bring the third bike on. Further down the line the bus operator let another bike on the bus. Finally when we were almost at our destination, yet another passenger with a bike needed to get on. We decided to get off here so that the the cyclist could get on and the other guy could get his bike on the bus bike rack.