Michael Jackson Memorial - The Militant WILL Be There! 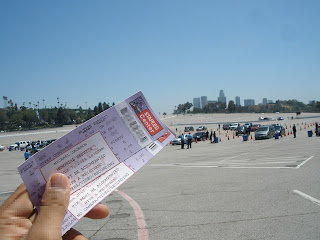 The Militant woke up this morning and got the email.

No not that email. He already got the one that read:

Thank you for your registration.


Sorry, we regret to inform you that your registration to attend the Public Memorial Service for Michael Jackson was not selected.


Hundreds of thousands registered, but only a few can be in attendance. 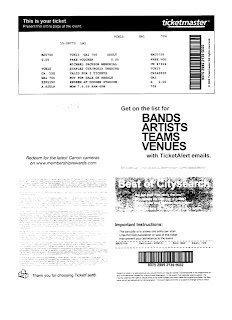 No, this was a different email. One from an operative, who asked if the Militant wanted to go to the big Michael Jackson Memorial on Tuesday at Staples Center. "Of course!" The Militant replied. The operative, though, could not retrieve the tickets between the 8 a.m. and 6 p.m. pickup time at Dodger Stadium. So the operative forwarded the voucher (pictured left) to the Militant, who printed it out, and he volunteered to retrieve them at The Stadium.

After riding in the main Sunset Gate where is voucher was scanned, he followed the auto traffic to a spot at Dodger Stadium Lot 3 near the Golden State Gate, where he ran into a section of the lot divided into several lanes by traffic cones. The first person he met asked to see his voucher and put a golden wristband on his arm. Yes, he has to wear this thing for the next 19 hours and use it to gain entry into the cordoned-off area surrounding Staples Center. A second wristband was handed over to him. 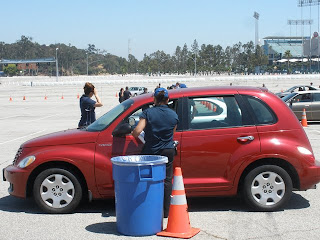 He was ready to leave, assuming they were the "tickets," when he decided to take more pictures of the goings-on. A few newsvans and police officers in cruisers and bikes (really, did there need to be that many?)were also in the house. Then he noticed staff handing out paper tickets and he wanted to know what was up.

Duh. So the Militant rode his bike to the end of the lane, where they took his voucher printout, tore it up, discarded it in a recycling bin and handed him a pair of purple tickets for the event.

Score! (Seat location and barcode pixelated out to maintain the Militant's anonymity in top picture)

As a long queue of cars waited to exit the Golden State Gate, the Militant rode on through on his bike, unencumbered. So long, suckas!

Now, the Militant knows what you're all thinking. "What's the deal with MJ, MA? It's soooo mainstream. Have you sold out?"

But the Militant, in his 30somethingness, can't deny MJ played a large role in his '80s music memories. He does own three unspecified Michael Jackson albums, two of them are on vinyl LP (You can pretty much take a wild guess at what one of them is). And the day the "Thriller" video came out, it was nonetheless a cultural event the day the Militant's dad came home from The Wherehouse and popped the tape into the old Betamax (The Militant certainly hopes no pictures of a 12 year-old Militant in a red zipper jacket ever surface).

But in the interest of Militancy, the Militant sees it this way: On Tuesday, July 7, 2009, the entire world's eyes will be focused on Los Angeles. At least for a few hours (again). we can lay claim to being the center of the world. In an age where collective consciousness is splintered into various niches, thanks to the Internet and specialized media, it's a rare sight to see such a major cultural event take place, the Militant will be there to witness it, and it's right here in our backyards.

The Militant will, of course, either be riding his bike or riding the (M)etro there. If you're going to the memorial at Staples Center Tuesday and don't, not only will you suck, but you're gonna make millions of other people's lives suck as well. The Militant can never suck!

The Militant will be Twittering (depending on signal quality) from Staples Center! Follow him at http://twitter.com/militantangleno!
Commandeered by Militant Angeleno @ 8:15 PM

glad to hear that you'll be there! :)

Happy to hear I wasn't the only cycling ticket picker-upper at Dodger Stadium. But now people may or may not think I'm The Militant!