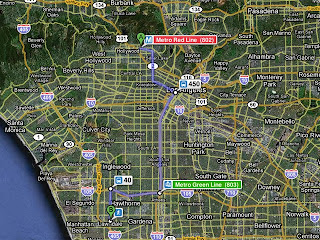 People have complained/campaigned for it, and more recently, were anticipating it, and it looks like it's finally arrived: Metro rail and bus trips are finally functional in Google Maps!

It's exciting, but not perfect; The Militant plotted a hypothetical route from Hollywood and Western in Los Angeles' Thai Town going to Marine and Inglewood avenues in Hawthorne. What was assumed as a Red/Blue/Green trip with a possible bus transfer or walk turns out to be a trip on the Red Line, the Harbor Freeway Transitway (Metro Express Line 450), the Green Line and Metro Local Line 40. Okaaaaay, then. There's still some bugs to iron out, or at the very least, a "rail only" option as is found in Metro's Trip Planner. But you heard it here first from the Militant! So far, so good, Google -- the Militant looks forward to more!
Commandeered by Militant Angeleno @ 3:55 AM

Wow good looking out Militant! It works on my phone using the google maps application. Sick Thanks for letting people know.

It failed to find trips via Commuter Express. But sure nicer than nothing.

Thanks for the update Militant... it was sure overdue.

Commuter Express is a service operated by LADOT. LADOT has not provided its trip data in the Google data format, so regrettably it will not appear as an option in Google Transit.

I really had to give Google some strong encouragement to get it to choose Metro Rail routes over busses--like copy and paste the street addresses of stations.

Also, do they include Metrolink?

I think for longer trips they should have a "somebody's going to pick me up at the station" option--so you can get the fasted mode from city A to city B instead of getting routed by bus just cause there's a stop around the corner from your house and destination!