So the Militant logs into his Facebook page and gets this: 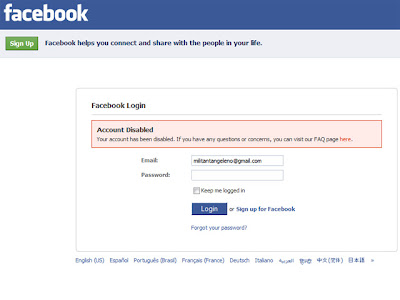 So he logged in again, but got the same results:

There was a link that offered an explanation, so he clicked on that.

Why was my account disabled?
Your account was disabled because the name it was registered under was fake. We do not allow users to register with fake names, to impersonate any person or entity, or to falsely state or otherwise misrepresent themselves or their affiliations. In addition, Facebook accounts are intended for use by single individuals, so groups, clubs, businesses, or other types of organizations are not permitted to maintain accounts.
Fake?

Excuse the Militant, but the Militant Angeleno is as real as it gets. After doing some research, the Militant discovers that Facebook.com is based in Palo Alto, CA - in the Bay Area - and that it was founded in Cambridge, MA.

Which only means one thing:

The Militant, who proudly embodies everything Los Angeles, is viewed by people in the Bay Area and the East Coast as "fake." Because they unfairly stereotype everything in Los Angeles as "fake." So for them, Los Angeles is a "fake" place, and surely someone who represents Los Angeles to such militant extremes has got to be "super fake."

This made the Militant fume with fury.

He has never felt so insulted in his life.

Then again, as wrong as those Bay Area and East Coast haters think about this City, it must be an honor though to be considered a true representative of Los Angeles, despite their disingenuous notions.

Not a good week for the Militant as far as the Internet. First YouTurd refuses to accept the Militant's recent Gold Line Opening Day Vlogstyle Episode, now Facebook denies the Militant entry because it believe all Angelenos are fake. Just a warning to all you other Angelenos out there, if you seem to have problems with Facebook.

So a big F-You to F-Book!
Commandeered by Militant Angeleno @ 3:23 PM

Their terms of use clearly states that they want you to use your real name. I would be kicked off for using my nickname too.

We love your blog and on this one with face book we feel your pain- they did it to us awhile back they don't like Angelenos and they don't like squirrels..bye bye Haterbook