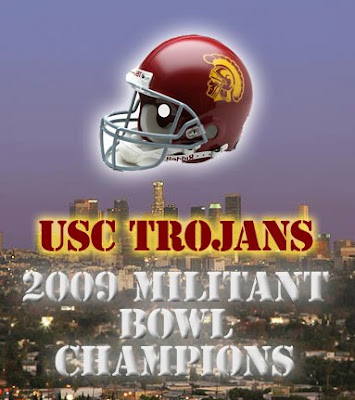 Congrats to USC, who fought on to win the inaugural MILITANT BOWL, 5-4!

As winner of the MILITANT BOWL, USC fans have bragging rights on which school is more militantly Angeleno. The Militant plans to pay a visit to the campus next week and do a blog entry on the school, so look out for him!

But thanks for playing, UCLA and USC fans! They may disagree on most things, but they should agree that they - and their rivalry - are part of what makes Los Angeles great! We'll do this next year! Until then, STAY MILITANT!

[MILITANT UPDATE: The score of the actual football game is USC 28, UCLA 7. The Militant may or may not be personally happy or sad with that result, but he is happy that the MILITANT BOWL is already batting 1.000 in terms of predicting the outcome of the crosstown gridiron match! Will MILITANT BOWL II predict the results of next year's game too? We'll find out next year!]
Commandeered by Militant Angeleno @ 7:52 PM

I can't believe we lost because 2 bruin fans didn't read the rules and identify themselves on your blog! Come on, we are supposed to be the literate, cross-town intellectuals! That was worse than # 83 not catching the balls that were thrown to him during the game.

Well the Trojans won, that can't be denied. I'm at least happy that their class-less actions at the close of the game reaffirmed my Bruin prejudice that any game the Trojan's lose (especially to Notre Dame), is a good day for me.

All is well in Los Angeles. Fight on!