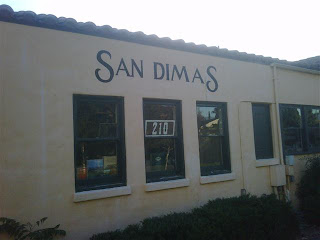 Ask most Angelenos what comes to mind when they hear of "San Dimas," and they will list two things: Raging Waters and Bill and Ted's Excellent Adventure.

The Militant found himself here Monday afternoon in the far-eastern stretches of the San Gabriel Valley (though he has been even farther east before) due to unspecified circumstances. Call it fate, or mere curiosity, but the Militant found a historically fascinating locale.

While most So Cal 'burbs mark their central business district with some faux-Main Street getup, or even worse, a large, auto-oriented retail development (anchored by one or more of the following: A Target, a Best Buy, a Home Depot and a smattering of fast food chains, including a Chick-Fil-A), San Dimas was surprisingly different.

From the moment one exits the 210 at San Dimas Avenue, the environs are different from most of the arid pueblos that lie in the shadows of the San Gabriel Mountains - there's considerably more trees and shade here. Part of that lay in the town's history as a former early 19th-century settlement named Mud Springs, and later named after this saint. 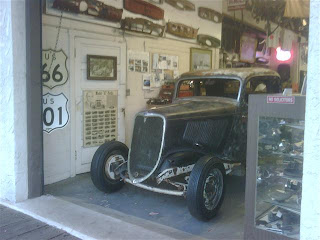 Bonita Avenue, the town's main street, boasts a total Old West flair, right down to the wooden boardwalk that lines the town's shopping promenade, the architecture of the buildings (even the local Thai restaurant doesn't look out of place in Old West San Dimas) and the large-serif fonts on nearly all of the street signs. Shops ranged from a vintage Ford automobile garage (pictured right), to a gourmet food market, to a pet store, a model train shop and a hardware emporium. 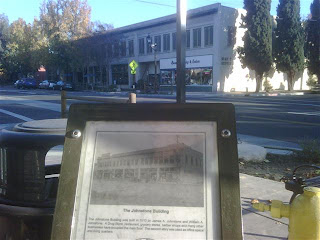 For history buffs (like the Militant), pictorial markers are positioned right across the street from various historic buildings, depicting them in an earlier life, and explaining their historic significance. Some buildings were relatively self-explanatory, like the old Santa Fe train depot that now functions as the Pacific Rail Museum. But next to it stood even more morsels of history: a restored water trough for horses, a stretch of the original Santa Fe railroad track first laid here in 1887 and an old water pump that once brought the plentiful groundwater up for human consumption.

Speaking of which, the town bears its own still-natural river, Cinnamon Creek, which runs just south of the city center. The street named Cataract Ave. refers not to an opthamologist's office but to a waterfall made by the creek.

Another surprise were the people of San Dimas: Expecting a total lilywhite town where the Militant would stick out like a sore thumb and may or may not feel welcome, at least from the people walking down the street it looked surprisingly diverse. A South Asian mother and daughter stroll through the shops on Bonita, while later down the street, an African American couple point to a new dessert shop and exclaim that "This used to be a Quiznos!" 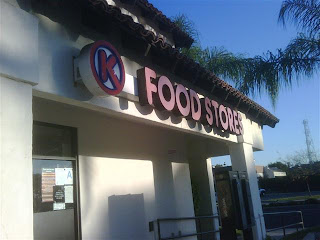 [Say it with the Militant now: "EXCELLENT!"]

No, the Militant didn't notice any strange things afoot here, nor did he run into some dude named Rufus, but the Militant wouldn't be surprised if other non-locals would instinctively look for a Circle-K in San Dimas. Even though, in actuality, the "Bill and Ted" films were shot on location...in Arizona.

[Say it with the Militant now: "BOGUS!"] 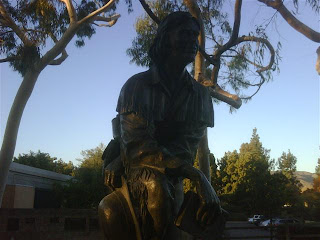 Heading back on Bonita, the Militant passed the San Dimas City Hall building and saw some sort of Jebediah Springfield-type statue (pictured left).

Which was all funny until he read the marker:

Turns out Smith was an Old West explorer/hunter type famous for being the first American to arrive in California over land from the east (Yo transplants, there's your forefather! LOL) and lived to the ripe old age of...32. He led an exploration party from Utah, over the Nevada desert and California mountain ranges and into Mud Springs, 183 years ago last Thursday. 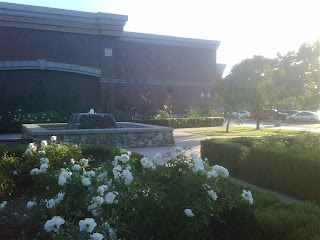 Even the accoutrements of the modern retail world did not feel out of place here. A shopping center blended with the local architecture without looking faux-historically tacky. The requisite local Starbucks seemed to fit in. And the nearby Albertson's supermarket even had a public space next to it -- a pocket park with a fountain, benches and rose bushes (pictured right).

The premature dusk skies typical of mid-Autumn soon fell upon San Dimas, and the Militant naturally had to set off into the sunset (he drove here, BTW, though Foothil Transit's line 492 takes you here from the El Monte Transit Center, and one fine day in the future, the proposed Foothill Extension of the Metro Gold Line may or may not take you here as well).

The beauty of Southern California lies in its surprises that reveal themselves before you if only you pay attention, get out of the car and walk around a little. San Dimas proved to be an, um, excellent example of that.
Commandeered by Militant Angeleno @ 2:50 AM

Forget the Starbucks, when in San Dimas get a cuppa excellent joe at Coffee Klatch!

Long live Jedediah Strong Smith! In 2008 I found another monumental tribute to him in the unlikely place of the Carthay Neighborhood on the median immediately south of Wilshire Boulevard and Crescent Heights:

Will: Hah! That dude sure got around!

There's a trail named after hime in Sacramento...