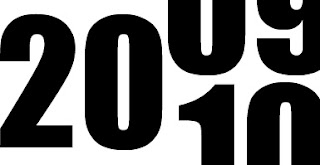 Whatup?! Looks like another year is a wrap. So it's time to reminisce and look back on the year that was.

First off, the Militant would like to apologize to all his loyal readers for the lack of consistency/prolificity in his posts this year. Eighty-four posts? PATHETIC! That's inexcusable for the Militant! But alas, without revealing much, it may or may not had to do with one or more or none of the following: His busy schedule, work, lack of work, travel (yes, the Militant leaves town, he just won't tell you when), health, extramilitant activities, The Witness Relocation Program, alien abduction, pirates, zombies, vampires (none of that Twilight crap though), robots, ninjas, robot ninjas, pure laziness, or the fact that it's sometimes better to use your time to live live rather than write about it. But the Militant will resolve to do a better job in 2010 (how do you pronounce that anyway? "Two-thousand-ten?" "Two-thousand-and-ten?" "Twenty-ten?") Oh well, he'll worry about that tomorrow.

NOW ON TO THE CLIP SHOW!

2009 began very foggy, but as soon as it cleared, he had himself a good meal at the Homegirl Cafe. The price of the Los Angeles Times went up to 75 cents, but sometimes you can get a copy for free if you just keep looking. For Martin Luther King, Jr. day, the Militant mapped out the places in town named after the civil rights leader. And speaking of leaders, as our country had a new one sworn in and made history, the Militant made another map where the one-time Oxy student named Barry Obama left his mark on this City. 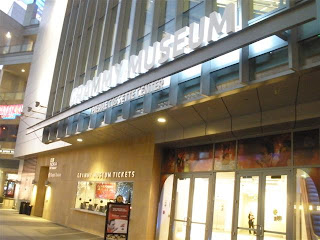 The Militant also took a trip to the Grammy Museum at LA LIVE (gotta be all caps...), which was also an on-location filming site for the upcoming Iron Man sequel.

The Militant did a little re-branding for his 2nd year of operations. Techwise, he jumped on the Twitter bandwagon in April, but in the fall, Facebook booted him off, accusing him of being "fake" (like all the other Angelenos, that's what they all say, right?). Oh well, the solution? Just start a new account, lol. 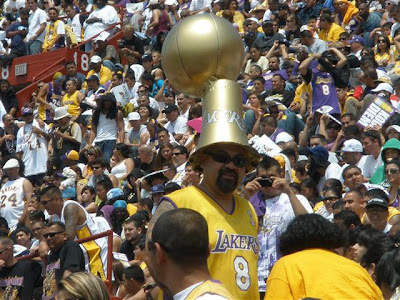 The Lakers did it, and Angelenos partied hard (sometimes a little too hard). But he did get to see the Coliseum decked in purple and gold for the very first time. The Dodgers almost did it, but just like last year, fell short in the final four. Still, it was another great season that began with an "O"utrageous "O"pening Day, was marred by Manny's suspension, then celebrated his eventual return, and found them winning the West (again), sweeping the NLDS (again) and being beaten in 5 by the Phillies...again. But win or lose, this was Dodgertown, and the street signs prove it all.
In other sports news, the Militant threw the first-ever Militant Bowl, where Bruins and Trojans got to duke it out on this here blog. This time around, it went to USC. 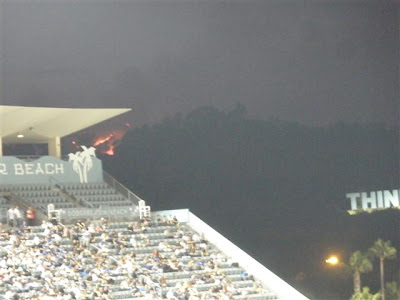 The Big-Ass Station Fire (is it STILL burning?), among the many brushfires we see (and breathe) in Southern California was one of the huge local stories of the year. So massive props to the firefighters who put their lives on the line, and even pay the ultimate price. 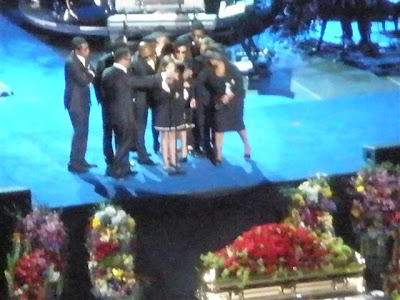 Analog television signed off, and Michael Jackson was sent off, and the Militant was one of the 20,000 to be there at Staples Center for the star-studded memorial service. He even made a map of MJ-related sights and landmarks around town.

Conan O' Brien moved his show to Universal City, and further down the Cahuenga Pass, Gustavo "The Dude" Dudamel made his debut at The Bowl. 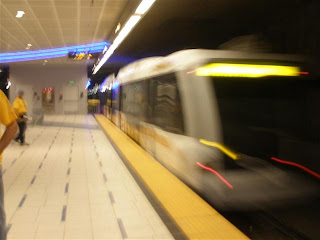 Also making its debut was the long-awaited (M) Gold Line Eastside Extension, opening up real rapid transit to The Real Eastside, homes. It was such a huge occasion, the Militant showed his face (well, kinda) again. The Militant also gave you an exclusive Militant tour of the O.G. Gold Line.

As usual, the Militant took you places, from Encino to San Dimas, dude, from Florence and Normandie to Figueroa and Sepulveda (yes, there is such an intersection), from the top of Mt. Hollywood to the beach by the Marina, and he will no doubt take you to more places in 2010. 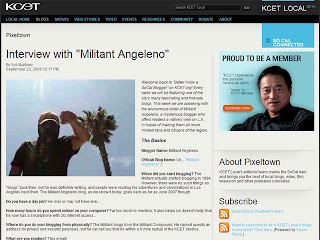 Bar none, the highlight of the Militant's year was being interviewed in September by KCET.org's website for their "Better Know A Blogger" series. Obviously he couldn't reveal that much about himself, but it was a huge ego boost for the Militant and was proof positive that the Militant Angeleno is a force to be reckoned with in this City. RECOGNIZE!

Who knows what adventures (or mis-adventures) we'll face in Los Angeles in 2010? Leave it up to the Militant to take you there.

Thank you for all the work you put in on this blog. It's very cool to be able to learn about the city from you.

Yes. Keep up the fine work, & I hope you have more time/chances/what-not to post more.