LotusNotes 2010: A Frugal Fest Of Firsts 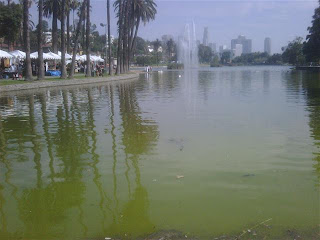 When the Militant first heard that the 2010 Lotus Festival was a go (first reported on this here blog back in March), he was excited to hear that one of his favorite City festivals made its return from its 2009 hiatus due to That City Budget Thing.

So the Militant hauled his ass down to Echo Park on Saturday and observed as such:

• This was the second Lotus Festival where there was an total absence of the eponymous aquatic flora in Echo Park Lake (pictured above).

• This was the first Lotus Festival to be organized independently from the City of Los Angeles Department of Recreation and Parks, this time organized by the nonprofit LA Lotus Festival, Inc., based in nearby Historic Filipinotown.

• This was also the first Lotus Festival where it rained. You heard right. Rained. At about 5:30 p.m. on Saturday, the normally-hot, sunny Lotus Fest weather on that day was a cloud-covered, humid atmosphere, and drops of rain (no metaphor here, it's the drops-of-water-falling-from-the-sky kind) fell down for about 15 minutes. So let this go down in history: 2010 was The Year It Rained On The Lotus Festival. 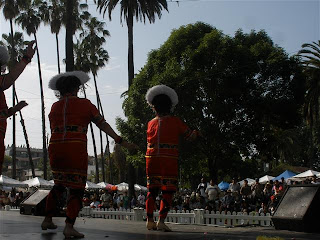 Though the Festival was back, the looming shadow of That City Budget Thing was plainly visible everywhere. There were no Dragon Boat Races (a traditional aquatic competition held on the lake pitting City departments, offices of elected officials, nonprofit groups and local businesses against each other) and most unfortunate of all, there was no Saturday night fireworks display (So if you missed your July 4 pyrotechnics last weekend, you're S.O.L. this time around). Efforts by the Militant to confirm the fireworks yielded ambiguous answers, though it should have been obvious when he discovered that the Yoki Daiko taiko drum ensemble was not booked as the finale act on Saturday evening.

But despite the Lotus-Fest-On-A-Budget this year, it was a real Lotus Festival, the same one that celebrated Asian/Pacific Islander Cultures (this year, China was the featured culture) and not the surrogate Echo Park Community Festival, which, judging from its entertainment, was more of a celebration of the newly-established gentro culture in EP.

Still, none of that was able to stop the Militant from having a good time, hanging out with operatives, enjoying great music and dance performances and getting all freaked out when the rain came, all in the company of several thousand fellow Angelenos (though attendance was markedly down from 2008 - as evidenced by the very short food lines in the booths).

As you may or may not know, starting next year, Echo Park Lake will undergo a two- to four-year , $84 million renovation process, which will result in the draining of the lake (which was originally a natural lake, having been fed by a nearby underground spring) and closing of the park. The intention is to improve water quality, which will ultimately mean the re-planting of the lotus bed, once the largest outside of Asia.

But this also means next year's Lotus Festival may or may not still happen. According to LA Lotus Festival, Inc. organizers, they are currently looking into temporarily moving the 2011 (and later) Lotus Festival(s) to another location, such as Lincoln Park or nearby MacArthur Park.

Bring it to the valley!!