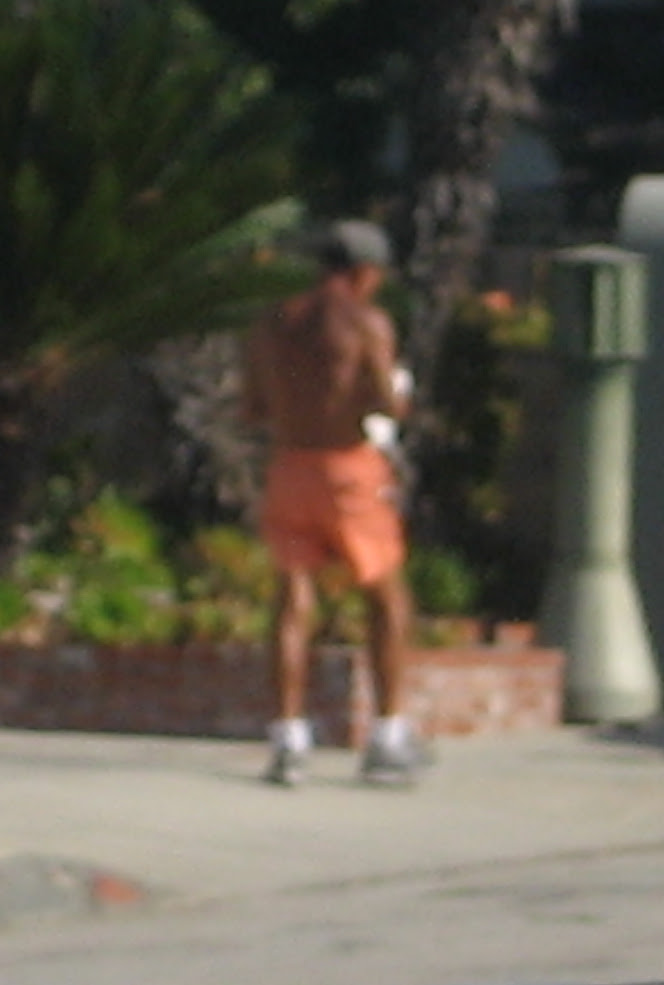 Like many Angelenos and the rest of the bloggerverse, the Militant pays his respects to Dr. Marc Abrams, the shirtless, sunburnt newspaper-reading pedestrian known by many for his 15-mile walks around the Silver Lake area, who died on Thursday.

The Militant, like many, was fortunate to see him roam Silver Lake, and has passed him many times on his bike, especially on the Griffith Park Blvd. bike lane. But he is most honored to see him walk outside of his element, where an early MA blog post (so early, the Militant still referred to himself the first person) mentions Dr. Abrams walking, of all places, in the Venice boardwalk one fine day in June 2007.

It's an understatement to say he'll be missed. He's a modern-day folk hero. Maybe his saga will live on in tall tales and join the likes of Paul Bunyan or Chuck Norris. At least we know he's walking in an even better place.

Now, most have been puzzled as to why a physically fit quinquagenarian physician met an early demise. The Militant is no doctor, nor does he play one on TV, but he may or may not have an reasonable explanation.

Walking has many health benefits, that cannot be denied. The Militant may not walk 15 miles a day but walks an awful lot compared to his more rotund, sedentary, suburban-based operatives.
Walking definitely lowers one's blood pressure. The Militant, who, on one of his parents' sides has a history of high blood pressure, received a "very normal" blood pressure reading in his last physical exam.

Dr. Abrams, who died while sitting in his backyard hot tub, might have spent too long in there, as hot water causes one's blood vessels to dilate and lowers blood pressure even more. Coupled with the fact that, according to a 2009 LA Weekly interview, he lived off of a junk food diet and three hours of sleep each night. He might have also been suffering from a congenital heart condition. The Militant's one-time freelance "boss," a man known for jogging every day, succumbed to heart failure himself in November 2007.

There will inevitably be tributes and memorials to Silver Lake's folk hero, such as Sunday's memorial walk at noon. The Militant may or may not be there!

There's even a move to rename the Silver Lake reservoir path after Dr. Abrams. Councilman Eric Garcetti was even approached on the renaming. Honestly, though the Militant strongly feels he is worthy of some sort of formal memorial or tribute, the move, though earnest, ignores recent history, and the reason why there's a path around the reservoir.

For those of you new to Silver Lake, prior to the last decade, there was no path around the Silver Lake reservoir. A simple painted line - and mostly faded at that - delineated the space between cars and pedestrians around the lake.

In June 1995, longtime Silver Lake residents Michael and Diane Manahan took a walk around the reservoir after dinner one evening when a car swerved out of control and struck them. Michael Manahan was injured; his wife Diane was killed.

The driver sped away.

The accident was later discovered to be caused by a drunk driver, whom upon learning about what happened, committed suicide.

Immediately after the tragedy, the office of then-councilwoman Jackie Goldberg looked into ways to increase safety for walkers and joggers around the reservoir. In 1996 the City approved the jogging path we see today, which was completed several years later.

The Militant would like to see Dr. Marc Abrams honored with possibly a statue, or even an annual walk-a-thon type event. But the path deserves to be named after Diane Manahan - the person whose tragic death brought on the creation of the reservoir path - to ensure no one (Dr. Abrams included) - meets a similar fate.
Commandeered by Militant Angeleno @ 5:01 PM

Plans for the jogging path along West Silver Lake Drive might have been approved in 1996, but it wasn't built that year. It took 10 years after Diane Manahan's death before it was completed.

Coincidentally, in building the path the city permanently removed a striped bike lane on the northbound side of the street.

Thanks for the info; The Militant stands corrected. You are, after all, an actual Silver Lake resident, whereas the Militant merely may or may not be.

The Militant remembers hearing about the tragedy and remembers happening upon the reservoir one day and pleasantly discovering the new path, but honestly cannot recall the exact year. He only (incorrectly) assumed it was the same year it was approved since the City had more money to do stuff back then.

Maybe the Militant is getting old. This cannot be good.

Thanks for remembering Diane Manahan! I went to school with her children.

No way the path should be named after the walking man. In fact, he rarely used it and seemed to prefer to walk on the side without the path.

Anonymous: A number of the Militant's operatives went to school with her children as well.

Yes, pass the word along, and make sure councilmen Garcetti and LaBonge know. The re-naming movement is trying to put the pressure on them. Hopefully they will be more respectful of recent history.

I'm just getting caught up with the MA, having only discovered you recently. I am a long time Silver Lake resident, and remember the stop sign that was erected on W SL Dr. after Diane Manahan's untimely death. I agree......any tribute to Dr Marc Abrams should not be connected to the path, as he never used it. He actually walked, frequently, near the middle of the street. Even now, I drive more slowly at night, thinking I will see his quickly moving shadowy figure just around the corner.

PS.........we're all getting old-er. This alone is not cause for alarm, as long as the mind does not follow.

Sandy: Thanks for the comment! The Militant has been blogging for 3 years, but some of the posts are timeless, so enjoy your catching up! The Militant is honored you're doing this on Los Angeles' birthday!

The Militant's Compound is not horribly far from Silver Lake, so you may or may not see him around!