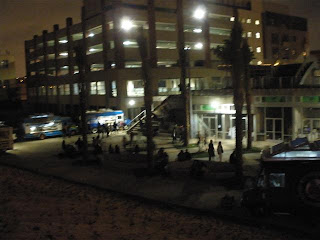 The Militant checked out the Downtown ArtWalk on Thursday night, not so much for the art, but to mainly to vibe off the street energy, sample the foodtruckage and assist an operative who may or may not be performing at the ArtWalk next month.

The foodtruckage was corralled off the streets and into a parking lot on Main Street between 3rd and 4th, but upon wandering the southern edge of the lot, he discovered a curious change in topography. 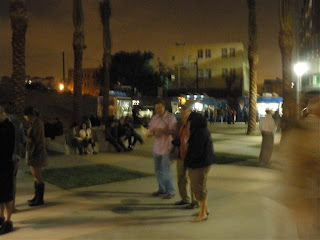 The ground sunk some 30 feet or so, revealing a concreted plaza with patches of greenspace, planted young palms and amphitheater stairs. There were about half a dozen food trucks, including the Fresh Fries truck, which the Militant tried out, and over a hundred folks just hanging out while a band of relatively inexperienced musicians attempt to play blues music.

But crappy musical performances aside, this was totally unreal for the Militant, especially in Downtown where the elevation is flat and the pavement you walk on has been there for years.
But most of all it was a crowd of people - gasp - hanging out and - gasp - using public space! Like whoa! About time! 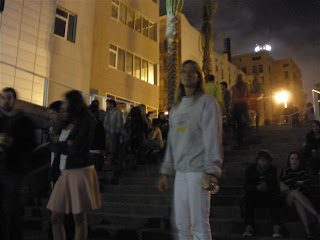 Well, it's not exactly public space. It's more publicly-accessible private space, as part of The Medallion (props to a special downtown operative for the building ID) fru-fru nouveau apartments recently erected on 4th and Main. The 96 units and 200 shops have yet to be occupied, but this plaza definitely was. But at least this is some new publicly-accessible hangout space in Downtown, that doesn't involve tons of dizzying HD video screens surrounding you for a change.

Too bad we don't have a lot of real public space in DTLA (although they're working on it supposedly), but hopefully this is the shape of things to come.
Commandeered by Militant Angeleno @ 1:58 AM