But Oh, Those (Chinatown) Summer Nights 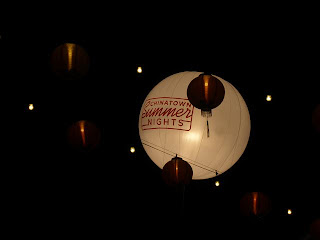 On Saturday the Militant rode into Chinatown for the long-awaited Chinatown Summer Nights (not to be confused with Mayor Villaraigosa's Summer Night Lights program, the annoying karaoke anthem "Summer Nights" from Grease, or Richard Marx's "Endless Summer Nights"). It's a weekly nocturnal event put on by the CRA, Community Arts Resources, KCRW and various cultural and business organizations based in Chinatown to promote nightlife in the Chinatown Plaza vicinity between 5 p.m. and midnight.

It seemed like a decently-attended event, although by the time the Militant arrived a little after 10 p.m., some aspects were already shutting down. All of the energy seemed to be at either the existing bars. the outdoor dancefloors pumping music from various KCRW DJs, or the line of food trucks queued at the Lei Min Way alley. The areas in between, thought, were largely empty.

Most absent, and the biggest bummer for the Militant was the no-show of the promised Night Market feature of the event, as he previously reported in This Here Blog. The Militant got to the bottom of this, and found out that due to budget reasons (remember, kids, anything that doesn't happen in life can easily be blamed on a budget issue), the Night Market (also described as a "Craft Fair") will only be running for two out of the four Saturday of Chinatown Summer Nights: On the 14th and on the 28th. And unlike the original plan, which called for vendors located all over Chinatown Plaza, Chung King Road and the Bamboo Lane Alley, the Night Market will only occupy the parking lot space off of College Street between Hill and Broadway. 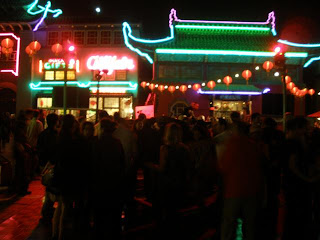 Yes, as expected, CSN was populated by Hipsters and HipKids (read: multi-ethnic 20-something locals who are into the same things as hipsters are but do not live the hipster lifestyle), and the Militant won't waste your time bitching about that as usual, but it would be nice to see more families and over-40 folks in the mix, as CSN seems to be targeted to a general audience. After all, the whole point of this event was to promote Chinatown's nightlife to folks who normally don't drop by these here parts when it's not time for the Golden Dragon Parade. And people already go to The Mountain Bar or the nearby art galleries.

The other big gripe was the seeming lack of anything Chinese or Chinese American going on in the added nightlife activities, at least by the time he got there. The Militant heard there were some performances and cultural- and food- demonstrations earlier in the evening, but dude, this is Chinatown. Represent!

This past Saturday's attendance, though, might have been heavily influenced by spillover crowds from the HARD Summer Music Festival going on at the Los Angeles State Historic Park next door. Which means this weekend's crowd could be anybody's guess.

One cool thing was the free bike valet provided by the Los Angeles County Bicycle Coalition. They will be there all four weeks of CSN and they're located towards the Hill Street side. Do take advantage of it when riding down there. The Militant may or may not have!

So drop by this Saturday. You may or may not see the Militant!
Commandeered by Militant Angeleno @ 1:59 AM