Has The Public Space Revolution Begun? 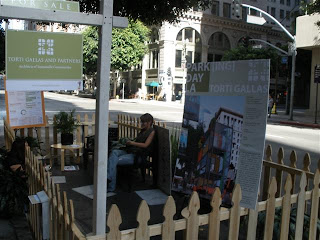 Ever since the post-World War II years, Angelenos were pretty much content staying in their homes, with their big front lawns and big backyards. The region's expanse geography has often been named as a factor, but an even bigger factor was our built environment - the only places where people were seen en masse in a recreational setting - aside from the beach of course - was indoors, like shopping malls, or in paid-admission environments (Dodger Stadium, the Coliseum, the Rose Bowl, Magic Mountain, Disneyland).

The suburban-based postwar paradigm was a contrast to the way things used to be; Downtown Los Angeles in the 1930s was virtually indistinguishable from New York City or any other bustling city center. And the historic nucleus of our City is, after all, a public plaza. But the freeways, parking lots and tract homes from the late 1940s on changed things.

There have been exceptions: Melrose Avenue, Westwood Village circa early 1980s. Then in the '90s, more of these pedestrian pockets started to gain popularity, namely Santa Monica's 3rd Street Promenade and Old Town Pasadena.

Are we in the midst of a public space revolution in Los Angeles?

Today, as you may or may not know, is the fourth annual observance of Park[ing] Day LA, a day where parking spaces reserved for autos become reclaimed for the day in the form of public human activity spaces. The intent, as the activity's SF-based founders established, was to create a dialogue. The Militant covered Park[ing] Day LA extensively back in 2007 (and a following-day epilogue) and in 2008.

But it doesn't stop there -- Hollywood Community Studio's "Streets For Feet" demonstration will transform Hudson Avenue at Hollywood Blvd into a pedestrian plaza from today until Sunday, with a bevy of activities.

And earlier this week, as reported in this here blog, The Robert F. Kennedy Inspiration Park opened to the public right on Wilshire Blvd (in front of the Ambassador Hotel LAUSD's New RFK Community High School) in the form of trees, plants, grass, benches, a public art memorial and even jazz music.

But wait, there's more! The four-block long Civic Center Park in Downtown has recently begun construction and the ever-popular mobile gourmet food truck scene has shown 21st-century Angelenos how to (literally) go out to eat. More and more communities are holding their own weekly Farmers Markets and the increasingly-successful Downtown ArtWalk, and similar regional events, are turning that Missing Persons song into outdated nostalgia ("Words" and "Mental Hopscotch" will still rock for all eternity though).

The revolution will not be televised. It will be outside.
Commandeered by Militant Angeleno @ 3:36 AM

but what will happen to former "indoor" plazas like malls/shopping centers? relegated to immigrant consumers who are increasingly moving into suburbia.

Valleypinoy: They will be subject to the intentions of their owners based on market demand. A number of suburban malls have already "opened up" and "lost the roof" to be converted into outdoor plazas - Long Beach Plaza, Paseo Colorado in Pasadena and the Sherman Oaks Galleria.

catching up on my blogs today and just finished reading this one...how ironic that you include the DTLA Artwalk as evidence of the coming public space revolution.

LAsprawl: "a revolution is not a revolution without some resistance" - You sho' got that right!