In Appreciation Of The Sunset 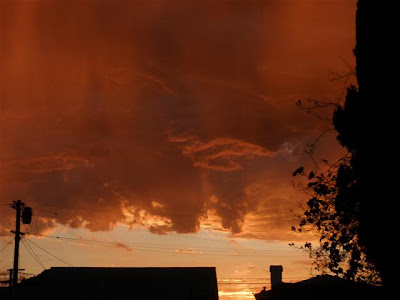 You guys just don't know how good we got it here in Los Angeles.

No other place in America can view the setting sun like this. Only with a west-facing ocean where the low-lying orange sun illuminates the sea and makes the clouds glow with a multicolored lightshow from red to orange to purple can you see something like this. Sure, there are many other cities on the West Coast, but San Diego, Oakland and Seattle are obstructed by a peninsula to the west, and San Francisco is a city that largely faces north and east, and only the rich folk who live on the coastal end of Frisco can see it (Why else do they call that part of SF "The Sunset District?"). But here in Los Angeles, the egalitarian sky show is for all. We even named one of our most famous streets after it.

Today. September 29, the penultimate day of the ninth month of the year, and just two days after The Hottest Day Evar, many of us saw and gawked at rainbows, be they single or double, today, as a monsoon rain wet parts of the Southland. Many of us re-enacted or quoted that viral video. The rainbow was clearly today's star.

But while everyone was paying attention to the star of the show, another spectacular performance was playing out on the opposite side of the sky. The same monsoon rainclouds that gave us that rainbow action also lingered in the sky to reflect That Setting Sun. And there it was. The Militant took the top picture from The Militant Compound around 6:40 p.m. today.

The glowing orange sunset clouds were like an ethereal upside-down mountain range. But the show would only last for a while, as the chameleonic sky turned purple, then grey, and the sun would hide until another day (hey, that rhymes...).
Commandeered by Militant Angeleno @ 9:57 PM