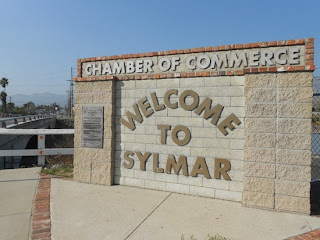 One of the Militant's great joys is visiting the many communities of this great City. The Militant has covered both The Eastside and The Westside, and has ventured 24 miles south of Downtown Los Angeles to San Pedro. This time The Militant heads 24 miles the other direction, to Los Angeles' northernmost 'hood -- Sylmar.

For most Angelenos, Sylmar is famous for just two things: The eponymous 6.7 earthquake in 1971 (which was actually centered five miles to the northeast in Canyon Country) and the visible terminus of the 419-mile Los Angeles Aqueduct.

But there's so much more to Sylmar than historical quakes and one MF'er of a waterslide.

Okay not that much, but it's got some interesting places of note...

Compared to the rest of the City, or even the Valley, Sylmar is somewhat different. Most of its population of nearly 80,000 lives in the usual SFV suburban tract homes or large apartments, but a great deal of Sylmar is rural or semi-rural -- A horse in a stable is just as common a sight as a car in a garage.

Originally called "Morningside" and settled in the mid-1800s, having named two of its major streets after then-U.S. presidents John Tyler and James K. Polk, Sylmar was named so because of the many olive groves that once grew in the area, originally planted by the friars from nearby Mission San Fernando who found the immediate area's climate uncannily similar to certain olive-growing regions in Spain. In the 1890s, over a thousand acres of the pitted fruit were planted and Sylmar olives were known throughout California as da shiznit. On certain days, the wind would ripple the treetops like waves in the ocean. Thus Syl ("sylva" or forest) + mar (sea) = "Sea of Trees."

The Militant was on a mad search for these olive trees, which were seemingly away from view in Sylmar's main drag, which is the Foothill Blvd corridor from Maclay Avenue in the south to Bledsoe Street to the north. But alas, The Militant finally found the last vestiges of the old groves along...Olive View Drive (duh...). 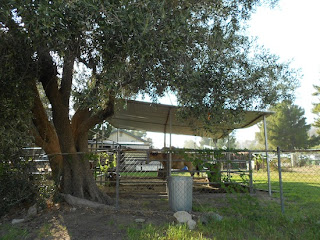 On the corner of Olive View and Bledsoe, a ranch-style house sits on a large property that's mostly covered in a grove of mature olive trees. And to add to the quintessential nature of the scene, under the tree, there was a horsie (pictured left)!

The nearby mountains, thrusting thousands of feet above the Valley floor, are also popular with hikers and mountain bikers. Across the street, a pack of MTB'ers were loading up their bikes back into their cars, congratulating themselves after a long, rewarding ride.

Also across the street is a major icon from the earthquake of 41 years ago. 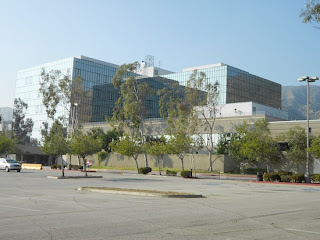 Olive View-UCLA Medical Center stands on the other side (pictured right), rebuilt 16 years after the quake, which caused several sections of the building and its parking structure to collapse. The entire structure was on the verge of collapse due to its weakened structural integrity, and the entire building was demolished two years later. The quake occurred just one month after the building re-opened after a 1962 fire. Today, it's operated by LA County and serves the health needs of the region's lower-income residents. A few of its own hospital staff could be found walking home or waiting for the Metro Local bus.

The facility originally opened in 1920 as a tuberculosis hospital, as the warm climate of the area was favorable for respiratory health patients (this obviously before the smog era). Ironically, the location of the building -- on an alluvial plain (where mountain runoff water traditionally flows) below a mountain range --caused it to be extremely vulnerable to liquefaction during the '71 temblor. 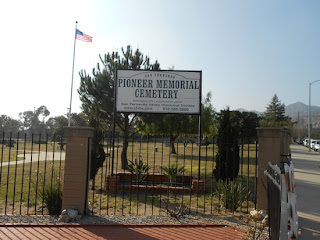 Speaking of history, just a few blocks down Bledsoe Avenue from the hospital is the 4-acre Pioneer Cemetery (pictured left), the final resting place of over 600 Valley residents interred between 1889 and 1939. A handful of Civil War vets were laid to rest there.  It after being threatened with abandonment in the late 1950s, the Native Daughters of the Golden West successfully fought to preserve it and got the cemetery State Historical Landmark status.

Okay, so where to the living hang out then? Like many SFV communities, there are chain stores galore, but Sylmar boasts its own local hangs.

Places like El Chaparral Mexican Restaurant on Foothill, opened in 1967, which is a local archetype of large chain Mexican restaurants like Acapulco or El Torito. Gary's Sports Lounge, just south on Foothill by Hubbard Street, is the old standby dive bar in the neighborhood. 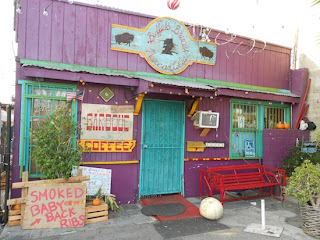 But perhaps the most unique hang in Sylmar is Buffalo Bruce's Mercantile (pictured right). Tucked away behind a strip mall on Hubbard and Foothill, blink and you'll miss it. But if you're ever curious how a hippie-dippy coffeehouse and wild west barbecue joint can somehow coexist, then this place is worth a visit.

Sylmar has its own Metrolink station on the Antelope Valley Line, which is several blocks further west along Hubbard, so despite its relatively isolated location, it's still transit-accessible. Metro buses also serve Sylmar of course...but even The Militant doesn't want to endure a bus ride that long!

The Militant strongly believes that all of Los Angeles' communities have their own distinct charm, you just have to look sometimes. The next time you're in the north Valley, try your own olive tree hunt or try to discover what even The Militant couldn't discover in Sylmar.
Commandeered by Militant Angeleno @ 1:02 AM

Sylmar also features the Nethercutt Museum, Riverfront Stages, and Veterans Park (although that last one is in unincorporated Sylmar rather than Sylmar in the city of Los Angeles). Nice post title too, Seymour.

Veterans Park also has mature olive trees. When I was visiting last summer, the birds were feasting on the olives. The park also has a popular disc golf course.

Also of note, Sylmar is where the largest cocaine bust in US history took place. The 7 billion-dollar drug bust in 1989 is thought to have triggered the rise in power of the Mexican drug cartels.

The Militant strongly believes that all of Los Angeles' communities have their own distinct charm, you just have to look sometimes. The next time you're in the north Valley, try your own olive tree hunt or try to discover what even The Militant couldn't discover in Sylmar. pakistani lawn suits low price , alkaram lawn with price