The Militant Gets Wet...For The Wetlands 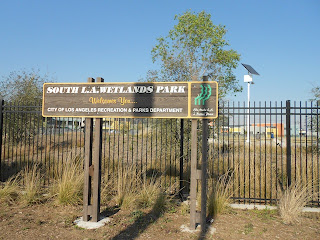 A couple of weeks ago, everyone was talking about the brand spankin' new South Los Angeles Wetlands Park that was about to open. So The Militant, preparing to do a whole big-ass post about its opening, scoped out the area, took a few pics and was all set to go to the dedication on February 9...

...But some unspecified matters came up, and The Militant put it on the shelf.

In fact, The Militant put many things on the shelf the past couple months. But he didn't think it would matter. Aside from a couple rabid Militant Geeks out there, who cares? No one reads The Militant's Blog anymore. Heck, no one really ready blogs anymore period.

Basically, The Militant has taken some time off to think things over. Should he change his game, or hang up his cleats? Should he try a different angle? Should he try to stay ahead of the game? He is still trying to think these things through.

But here's the part of the blog post where The Militant realizes he's gone off on a large tangent, some four paragraphs into his post, and has yet to really tackle the intended subject matter.

Okay, Angelenos, The Militant was in The South Side on Friday, and after he got P.O.'ed at the Sectional Center Facility down on Central Avenue, he decided to pay the South Los Angeles Wetlands Park a visit.

It was a neat place, albeit slightly barren. White light poles with large, angled solar panels in some systematic fashion lined the grounds like an array of SETI instruments. The ground comprised of nearly all dirt paths. 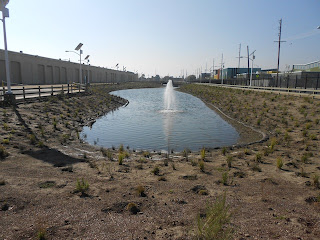 The focus was the large lagoon running through the north end of the park, its main functional feature. Water is diverted from the San Pedro Street storm drain, separated, filtered and runs through the 3-foot deep body of water, and then out back again into the storm drain system, where it winds up, cleaner than ever, in Compton Creek, The Los Angeles River and The Pacific Ocean, respectively.

The symbolic Elephant In The Room is a massive "Existing Concrete Structure" (according to the park map) which seems to have no functioning windows nor doors. More on this later.

At the 2:00 p.m. hour, the park was quiet and serene. Aside from the whooshing of cars and the planes queuing to land at LAX, it was mainly the sound of the breeze, and occasionally the cacophony of seagulls or crows flying overhead. This was pretty cool.

There were a few teenagers walking in the park, a mother and her kids taking a walk through the park and posing for pictures, and a few other parents pushing their little ones on strollers. But come 3 o'clock, the kids from The School With No Name across the street (really, there's no signage whatsoever, but nearly a half hour's worth of Militant research came up with the name "Dorothy V. Johnson Opportunity High School," formerly known as Central Region HS #16...typical LAUSD, always making things more complicated than they have to be...tsk, tsk...) filter out and make the park their hang...which both may and may not be a bad thing. 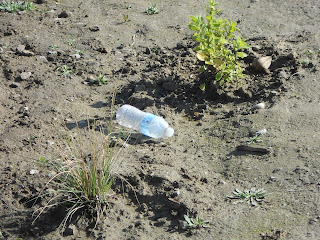 Already the few picnic benches have permanent marker graffiti -- albeit more of the bathroom stall variety than gang turf markings. And snack food wrappers (Cheetos Puffs seems to be the most popular around here for some reason) can be found on the grounds and on the shores of the lagoon, as well as discarded water and soft drink bottles. But the youth have found value in the place, some of whom were seen kicking a mini-soccer ball around an open area towards the west side of the park. Teens being teens, The Militant's sure that a few adolescent couples have found this to be a place to walk while holding hands [Cue "Awwww" sound effect].

During this time of the day, the parking lot started to fill up, but not with park patrons -- it's turned into a temporary parking area for parents to pick up their kids.

Thing was, the parking lot could hold some 67 automobiles, but 0 bicycles! Zero! Zilch! Nada! No bike parking! So much for all this eco-wetlands-runoff-oasis! Like WTF?!

But alas, this is a young park. Its barren look will in time be overtaken by the eventual growth of the California native flora (The Militant, after learning much about native plants since his Native Month series, was quick to spot some white, purple, Cleveland and Bees' Bliss sage).

Most importantly, the park was made not so much for curious urban explorers from other parts of town, but for this South Los Angeles community. The community will find its own value and worth for the park, which admittedly, even in an upscale neighborhood, would still look a bit odd at the moment.

Now about that "Existing Concrete Structure." The property was once home to the Los Angeles Railway's South Park Shops (and, until recently, Metro's Division 14 Bus Yard), a facility where streetcars, and eventually buses were stored, repaired and maintained.
The South Park Shops were in operation from 1906 to 2008, encompassing the various transit entities of the City over those 102 years. The Existing Concrete Structure was a relatively new addition to the facility, built in 1926. It kinda looked like this inside:

It has no function today, but there are rumors that the Existing Concrete Structure will one day be turned into a streetcar museum. The Militant is feelin' kinda giddy over that. But other remnants of the area's transit past are still evident, for just a block north, on the corner of 53rd and San Pedro, one can see fractures caused by paved-over Yellow Car tracks:
The Militant was glad to finally visit the park, which inspired him to get off his lazy ass and finally do a blog post. Urban design, open public space, environmentally sound (well, mostly...get those bike racks installed, people!), native plant life, and with a historical transit theme...how much more militant can you get? The Militant looks forward to returning a few years from now when the plants are all grown up and the streetcar museum is ready. South Los Angeles, take good care of this place, and enjoy it with pride.

AW HECK WHY NOT (a.k.a An Excuse To Post More Pics):

Commandeered by Militant Angeleno @ 1:14 AM

Very intriguing post. I like your critique and the combination of history and photo essay. What's up with no bike racks? Ridiculous. I'll be reading you from now on.

New reader here, too. I seriously *heart* roaming around on my bike and finding places I'd never seen before.

Hey, Militant. It's been about five years, but I'm still reading your blog. Don't give up on it! And this was another great post. Thank you!

a.e. and Darla: Welcome new readers! The Militant has been here since 2007. Where ya been? B> But anyways, thanks for reading and keep reading!

Scott: Thanks for the loyalty and encouragement. Stay Militant!

Good post Militant. I still bookmark your blog and check in now and then, glad to see you are posting again.

bgfa: Thanks Bert. The Militant might as well come out and admit to the world that he suffers from RBPD - Recurrent Blogging Procrastination Disorder.

Glad to see you back!

Those LAUSD schools with numbers are weird. I think they're just waiting for a rich person to buy the naming rights.

Gail, Evan, Alice: No one seemed to complain when The Militant was "away" (whether he was physically or figuratively away, The Militant will remain ambiguous about that), so.... :P

One of these days, The Militant will be no more. But...that day is not on his calendar. It might be on the Mayans' though.

cindylu: But you is hardcore though!

One day The Militant will stop blogging and start writing for greeting cards and fortune cookies. Will you still be reading that? B>

Good to see your posts again! Hang in there, your blog is great! I love the details you point out in your visits (the state grass of Calif!), which show you do your homework! You obviously love this city like we do and respect its residents. You inspire me to get back on my bike and ride out these places.

Go check out the L.A. City workers kicking back most of the day when they should be working. Your tax dollars.