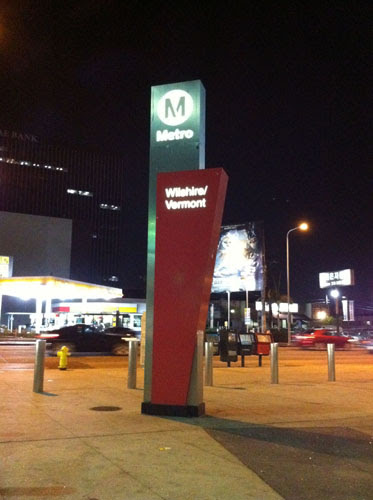 One of The Militant's favorite Metro Rail subway stations is Wilshire/Vermont, because it's so different. First off, it's the only 'junction' station in the subway, being the diverging point for the Red and Purple lines. Also, because of that, it's the only stations where the tracks run parallel on top of each other (as opposed to the perpendicular nature of the 7th Street/Metro Center and the Imperial/Wilmington/Rosa Parks/Willowbrook/MLK Medical Center/Metro Central Control/Dennys stations. It's the only Metro Red/Purple line station to have a weekly farmer's market at street level (Though The Militant recently learned that one will also be coming to Hollywood/Western this Spring). It also sports the looooooooooooongest escalators in the state of California.

But most of all (and the whole dang point of this blog post), is the fact that it's the only Metro subway station that offers cell phone coverage.

Metro bus and light rail riders currently enjoy chatting, texting, surfing and Tweeting from their phones during their journeys, and most of the time it makes the long ride a bit more enjoyable (unless you're not on the phone and sitting in close proximity to someone who's yapping louder on a call than they would talk to someone in person...). Even the Blue Line offers a place to charge one's mobile device.

But Red and Purple line riders do not have that privilege. Those QR codes on the subway car advertisements are useless. This all may or may not change in the near future though. 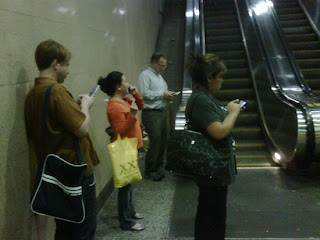 Some frequent riders who board at Wilshire/Vermont know what's up though. They can talk, text, Tweet and surf from 120 feet below the street - the deepest station in the entire system.  Because of the particular design of the station, which lacks a proper mezzanine level that would buffer cellphone signals from the surface, mobile users are able to get coverage here.

Cellphone reception is best near the escalators on either level, but if you're sitting on the train and your car is situated close to the escalators during your stop. you can send out that text or Tweet you were suddenly inspired to write while immersed in the zen of the whooshing of tunnel air and the acceleration and deceleration of the train's electric motors (Hey, at least The Militant finds those sounds to be soothing...).

So there you go Metro subway riders...you can use your mobile phone in at least one station. Of course, in that not-too-far-off future when those calming subway noises make way for the cacophony of People Yapping Too Damn Loud and the annoying din of Really Awful Ringtones, y'all gonna look back fondly at the days when only one station gave you the privilege of cell phone usage.

Commandeered by Militant Angeleno @ 12:52 AM

As a frequent user of the Red / Purple Line, I've become dependent on that station, timing my twitter updates and tweets just as I pass though.

I knew the escalator from the lower track to the street was long, but the longest in California?!?!

Hey, do you remember when that Peter Shire tight-rope walker sculpture over the escalators worked? It was really cool, walking back and forth.

The Metro Red Line has a bunch of art that has gone neglected over the years. The projectors at the Hollywood & Vine station used to flicker until the bulbs went out. I noticed this past week that the "Eye Ball" projections at the Hollywood & Highland station have gone dark. Metro does a great job with including public art, just a terrible job maintaining it after it is installed.

So old skool I listen to a "radio," but I have noticed the "radio" does get a signal (at least on the upper platform) at Wil-Ver.

Awesome work guys, So if you need any converter for a file to file converting then try this;

That easily convert one file to another like those;