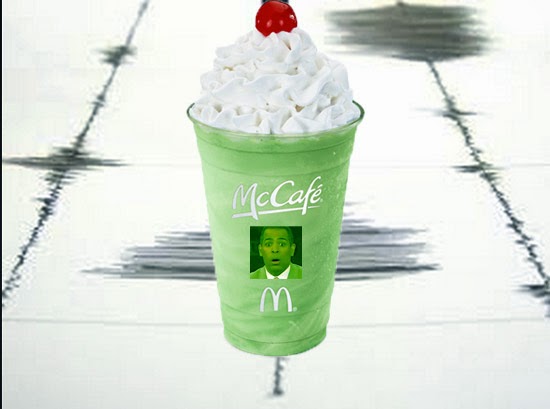 Did you feel it? You may or may not have! A magnitude 4.7 4.4 earthquake rocked our world this morning at 6:25 a.m., centered in Westwood Encino, the largest quake felt in Southern California since the 1994 Northridge 2008 Chino Hills temblor.

The Militant was in his Compound, sleeping in his bed, and woke up at around 6-something a.m., realizing he'd slept through the night with the lights on and having forgotten to brush his teeth. So he brushed, shut the lights off, and went back to sleep, lying there as the morning sun was lighting up the sky, when he felt a brief but definitely noticeable shaking, which lasted but a few seconds.

The Militant, instinctively ready to waken up his trusted portable computing center (a.k.a. his lappytop) and scour Twitter for the initial magnitude and epicenter location, stopped himself short for a brief while before tweeting, "The Militant felt that." See, we've had a bunch of sub-4.0 quakes over the past few years, and The Militant hadn't even felt a single one. But he felt he could say more about today's tremor.

Then he realized today was St. Paddy's Day and quickly thought of any witty connections with the quake. Quake. Shake. Shamrock. YES!!!!  Consider it The Luck of The Irish (even though The Militant may or may not have any Celtic heritage of any percentage), but in the span of all but four minutes after el temblorito, he decided to tweet thus:

And the rest was history. #ShamrockShake it was. Top O'The Mornin' To You!

Though the day was mostly associated with KTLA's Chris Schauble and Megan Henderson ducking and covering (as every Los Angeles area native is taught in school -- one of the few things the LAUSD actually teaches you), media outlets everywhere went with the #ShamrockShake moniker for this morning's seismic event. Even KABC's most excellent Marc Brown mentioned not only the #ShamrockShake, but credited The Militant by name on the air!

Whoever named it the #ShamrockShake wins Twitter. You may now collect your prize.
— Marc Brown (@ABC7Marc) March 17, 2014

It was aired on the 5 p.m. Eyewitness News newscast, which The Militant unfortunately missed, but others bore witness to the historic mention:

@militantangleno @ABC7 I believe the exact wording was "a twitter user who goes by the name of Militant Angeleno..." coined the term.
— Ted Rogers (@bikinginla) March 18, 2014

The Militant made his mark on society today. The world will never be the same. He also didn't feel any of the subsequent aftershocks. A 4.4. ain't no big deal, but he did feel that one. The Militant normally jokes that "No earthquake under a 5.0 is worth mentioning," but he may or may not have to lower that threshold. Where were you when you felt today's #ShamrockShake?
Commandeered by Militant Angeleno @ 11:15 PM

Good to see you blogging again Militant!
I was in Santa Barbara that night so I didn't feel the Shamrock Shake. But I did feel the La Habra one. As the earth started to roll, I, like many Angelenos, just sat there wondering if it would be big enough to get under my desk for.