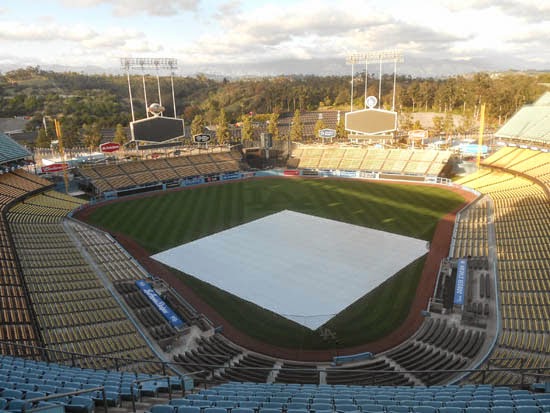 On Monday, The Militant joined about 55 people and five hipsters on a tour of the new 2014 season renovations at Dodger Stadium, as well as a glimpse of things most fans, especially the disadvantaged ones who can only afford tickets in the upper tiers (i.e. The Militant), don't get to see.

Now, The Militant has toured the stadium before (which included a foodie conversation with Andre Ethier and seeing Mr. Scully's back), and last year The Militant got to post about the 2013 stadium renovations -- the first permanent stamp on the facilities since Our New Guggenheim Overlords took over (The Militant will not use this post to gripe about the whole Time Warner Cable debacle, and the team's disappearance from many (non-cable-privileged) households, though he just did, indirectly).

But this year, there were new goodies in store, and who better than to show it than Janet Marie Smith,  the Dodgers' Senior Vice President of Planning and Development. In case you're not familiar with her name, she's been a longtime sports executive with a background in architecture and urban planning. As an architectural consultant, she was responsible for the much-emulated retro ballpark design at Orioles Park at Camden Yards in Baltimore. She also oversaw the conversion of the 1996 Olympic Stadium in Atlanta to Turner Field. So, she definitely knows her stuff.

She talked about changing the look and function of the Dodger Stadium grounds while at the same time keeping the design faithful to the early 1960s design, namely claiming some of the parking lot blacktop space to expand the stadium perimeter. The first part of that was achieved last year, with  the Reserve Level plazas, created to establish the clear separation of stadium grounds and parking lot, and provide more people/activity space, as well as to establish unique landmarks for each level and area (because of that, did you know that Dodger Stadium was the 7th most Instagrammed site in the entire world in 2013?).

Let's look at the numerous photos that took The Militant a long-ass time to resize and upload, shall we?

The Militant is hungry for a Dodger Dog now. Even more, he's hungry for some baseball. He may or may not be there on Opening Day on Friday, but he's definitely ready for the season! Go Dodgers!
Commandeered by Militant Angeleno @ 11:51 PM