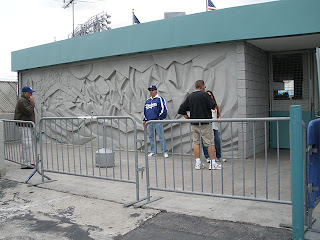 Wanting to see the major league debut of this particular rookie, the Militant decided to head on over to The Stadium on Sunday, inspired by this blogger who recently made his first two-wheeled foray to the game, who was in turn inspired by yours truly, who may or may not have been the first person evar to lock their bike onto the Dodger Stadium bike rack.

The ride to the compound was a steady half-hour, and the Militant got no heat from the Standard Parking drones who have in the past told him to dismount. After buying his game day tickets at an unspecified Reserve Level ticket window, he carried his bike up the stairs to the Lot P bike rack, ready to make his first regular season lock-up to the aluminum apparatus.

Imagine the Militant's surprise when he discovered that not only was it fenced off from accessible entry (the Militant had to DIY his way in, lifting off part of the steel crowd barrier to enter), but the entire damn bike parking area had been turned into the SMOKING SECTION (pictured above). Double-u Tee Eff?!?!?

Lasting 6 innings and getting a no-decision, the kid threw seven strikeouts and hardly threw anything below 92 mph. His left arm is hot stuff indeed, though he still needs to develop some more fielding smarts, like the moment at the top of the 1st when he failed to notice the Cardinals' Albert Pujols attempt to steal third. Nonehteless, the Militant got to see Kershaw's first-ever major league strikeout:

...right before he gave up his first major league run.

Speaking of big league firsts, fresh-from-the-minors 2nd Baseman Luis Maza, filling in for Jeff Kent, knocked his first MLBomb into the left field pavilion and got the "Kernkraft 400" treatment as well as the roar of the crowd.

In a 10-inning game of catch-up with the redbirds, The Militant and 46,565 others were finally treated to two innings of Saito action and Andre Ethier's walk-off RBI in the bottom of the 10th, giving the Dodgers a 4-3 win. Cue the Randy Newman!

With the Smoking Section barrier finally gone, the Militant got from Lot P to the Stadium Way gate in 1:59 and back to the compound in 35 minutes. With the money he saved on not having to pay parking, he used it on overpriced, slowly-served Stadium food.

Additional images from the Militant Cam: 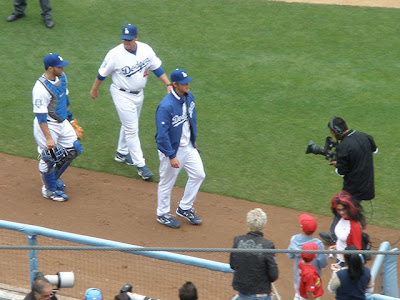 Man of the Hour: Kid Kershaw and Russell Martin get ready for the game. 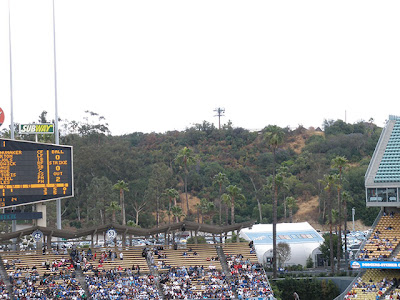 AT&Tree: Can you spot the cell phone tower disgused as a palm? 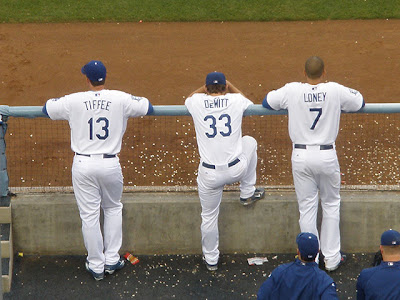 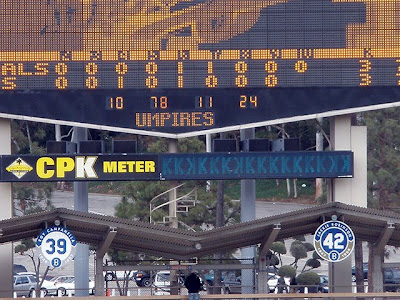 Can't Handle Anymore: With seven of them contributed by Clayton Kershaw alone, the CPK Strikeout Meter gets maxed out. 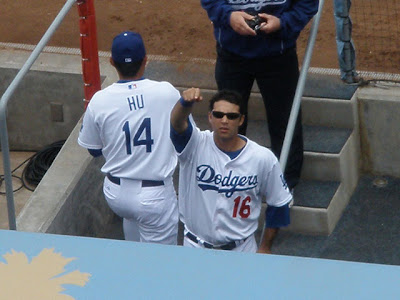 PRICELESS: None other than Mr. Andre Ethier himself raises his fist to the Militant!!!
Commandeered by Militant Angeleno @ 6:37 PM

Sorry to hear you had to manually open the barrier. I don't know what prompted the security representative to come over and un-interlock them on his own so that we could get our bikes in Friday night, but it was surprising and appreciated. Maybe Sunday is his day off?

In retrospect, there were smokers in there when we arrived and departed. So my guess is the reason we had our own "bikes only" gate with which to entry unsearched isn't due to efforts by the Dodgers to accommodate cyclists. More likely the portal is used to allow smokers out of the stadium and into that corral which is in place more to contain the smokers (but not their second-hand smoke, of course) than to protect bikes. Nice.

Will: Yeah, the Militant kinda figured out your account of the "Bikers Only" entrance had to be too good to be true. Did they scan your tickets? And perhaps that explains why the rack was moved from the center of the little nook to the far end of the wall -- to accommodate the smokers!

I do remember them scanning the tix, but what I can't believe is that the Dodgers don't get the irony of relegating people making more pollution to the same place as people trying to make less. Or maybe they do.