The Other Los Angeles Bike Culture 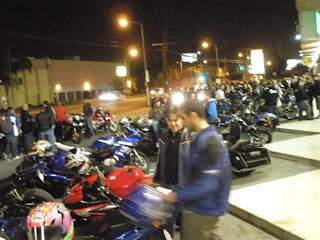 With Wednesday evening's Santa Ana windstorm making it too dusty ride his bicycle, the Militant took a drive along Santa Monica Blvd and unexpectedly saw them -- quickly filling up the strip mall at Van Ness Ave, the one that unceremoniously fronts the Hollywood Forever Cemetery. They came in packs of a dozen or so, a long string of white headlights streaking into the otherwise empty parking lot, engines roaring like thunder in ascending pitches, loud enough to rattle the bones of the deceased buried in the grounds behind the stores.

For they are motorcycles and tonight is Wednesday night -- Hollywood Bikenight. Welcome to Los Angeles' other bike culture.

Lest you picture tubby, hairy, Hells Angelenos decked in leather jackets and riding Harleys, this is specifically the sportbike culture. Virtually every motorbike is of Japanese manfacture -- Hondas, Suzukis, Kawaskis, Yamahas -- and the hipster-free crowd of some 200-plus, though predominantly 20s-40s males, reflects the same racial demographics as Los Angeles itself: majority Latino, with sizable white, black and Asian representation. Though a seemingly intimidating scene to on-lookers, this is strictly an amicable, social gathering of sportbike enthusiasts, where solo bikers and crews converge to form a weekly community.

"They just come out here to hang, to check out each other's gear, share tips, that's all. Many of them just roll with their crews," said one sport biker, unaffiliated with a crew and relatively new to the scene as he stood next to his 6-month-old lightning-blue Kawasaki. "Most of them here are from the [HollywoodBikenight.com] forums." 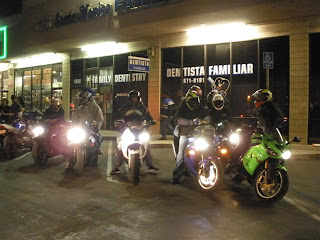 The Hollywood Bikenight tradition actually started in front of a Canoga Park Starbucks by half a dozen sportbikers in late 1999 as a weekly hang, which turned into a group dinner ride to Hollywood or Santa Monica via Mulholland Drive or the Sepulveda Pass. The group grew exponentially in size via word-of-mouth just months later and became known as the SFV Bikenight. By 2001 the event grew large enough to take over the Carney's Hot Dog stand parking lot on the Sunset Strip, and the creation of a website for the event brought even more sportbikers to the fray, eventually being given the boot by the Sheriff's Department for loitering. The event became legit with a partnership with Impact Motorsports Promotions, who brought more structure as well as marketing to the Wednesday night ritual.

By summer 2003 the promoters struck a partnership with Fatburger and moved their gathering spot to the burger stand's East Hollywood location by Vermont and Hollywood. But the event's popularity with nearly 400 motorcycles and nearly as many friends and spectators got them kicked out within a year later and SFV Bikenight, eventually renamed Hollywood Bikenight in 2006, settled into various locations in the Hollywood area. The current Santa Monica and Van Ness location has been the Hollywood Bikenight spot since 2007.

Unlike the bike events that the Militant is typically used to, there's no singular mass ride where the roaring engines all head to (that, and all the *cough* exhaust -- eco-friendly this is definitely not). The sportbikes started to arrive at around 9:30 p.m. and by 11:30, many of the crews rode off into their own trips, usually around Hollywood or on to the Valley, sometimes with unaffiliated bikers joining in.

Even after the Militant arrived at his compound, the sportbikers' presence was felt even there, as the growling chorus of motorcycle engines was easily heard in the distance.

It's just another Wednesday night in Los Angeles.
Commandeered by Militant Angeleno @ 12:34 AM

Why cant you guys hang out in a quiet mannre, dont you know that people liv ein the are and it's very annoying to hear all that rackest you guys make, it's not necessary it's really annoying, Ihope that you guys keep getting harrased by the police.