May Or May Not - A Month Of Militancy, Part 1: Know Yer Geography! 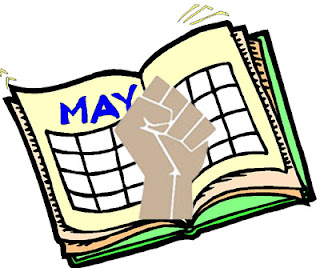 Yes, this is the first day of the month of May Or May Not. And to celebrate not only the merging of one of the Militant's favorite phrases with the new calendar month, as well as as significant day for Militants of another kind, the Militant will commemorate the month with a series of edjumacational posts.

Yes, you may or may not know the Militant, but nearly every day the Militant gets emails asking, "How can I be a Militant Angeleno too?" Well look no further. This entire month of May Or May Not, the Militant will offer posts on how you, yes, you can be a Militant too. Or if you're a transplant whose been here for a number of years and wants to make a lifelong commitment to be a real Angeleno, how to raise your militancy level. Or at the very very least, like if you just got here off the Greyhound last Friday, how to not whine so much.

- The View From Here: It's a well-known fact that most Americans can't place the US on a map, or even recognize states within the country. Or even make sense of any of it. If you're on the Space Shuttle, can you spot Los Angeles?
It's quite easy. Look for the Palos Verdes Peninsula - which looks like a big clenched fist punching through the west coast. That's right, suckas! This land was made for Militants!

Can you tell the difference between the Santa Monica, San Gabriel and Santa Susana mountain ranges? Do you know that they all envelop the San Fernando Valley?

- Study The Guide: A staple for many Angelenos is El Guia de los Hermanos Tomás. But most (non) Militant Angelenos simply keep it in their cars and only refer to it when they get lost, wasting time in the process flipping from page 512A to 512C with the book in their lap while driving. A MILITANT ANGELENO NEVER GETS LOST! Instead of keeping it in your car, study it! Read it on your Metro commute. Read it while in the waiting room of your doctor;s office. Read it in the bathroom when you take a dump. Doesn't matter. Once you learn that west of Beverly Hills, Santa Monica Blvd. is south of Wilshire, or that Whitnall Highway in the Valley is not really a highway, or that we got numerical avenues 2-12 in the West Adams/Mid-City area and 16-67 in NELA (But why no avenues 1, 13 or 15 anywhere?), then you will know where things are.

The Militant spent years studying The Guide, so much that if he were to be blindfolded and dropped off anywhere in the City of Los Angeles, he can make it home, without the use of a map, in less than an hour and a half ( Of course, if you ever met the Militant, which may or may not ever happen, this is not a direct challenge you to blindfold him and drop him off at an undisclosed location. Nor is this an invitation for any of his operatives to pull anything similar). And yes, you L337 G33Kz, you can use Mapquest, Google Maps, Gmapz Pudomiter or Google Earth, which is a fine substitute, but there's something about taking in chunks of the City framed by a single page that you can't get by dragging your mouse. PLus, if you do have The Guide memorized, how much faster it will be for you to navigate an online map.

- Explore! Via Different Means! The Militant also got to know his City real well by getting around strictly by bus for nine years before getting his driver's license. His $4 Monthly Student Pass (yea, the Militant is blatantly dating himself) was like a passport to the world. And that was before we had any trains or rapid buses. So you got no excuse! And yes, bike riding's the big rage now. Truth be told, when you're driving in your car, any street that doesn't have a signal doesn't really exist to you unless it's your origin or destination. So you're missing out on a lot. And walk around town too! We've got great weather for walking...Either way, you'll see streets you never knew, much less heard of, before. Streets that can bear history, architectural significance, or even a creek. You'll never know unless you get to know 'em.

- Know Your Directions! There's always gonna be mountains to the north or east of you, and ocean to the south or west of you. Unless you're in the Valley, whereby you would replace "ocean" with "not-so-tall mountains." The sun always sets over the ocean, except in the summer when it sets over western Malibu due to the Earth's axis.

- That Whole Eastside/Westside Thing: Already covered it, thank you.

- Know What City You're In! Look at the street signs! If it's blue with white lettering or black with all upper-case white lettering (old school), you're in the City of Los Angeles. Glendale has off-white with black lettering. West Hollywood has blue also, but with the city's outline logo on the left side. Santa Monica's is blue too, but with a yellow bar. The list goes on. Sometimes the street signs on both sides of a street will differ. You're on the border. Try not to call the police at that point. If something happens, move over a block before calling.

Yes, this is all basic stuff, but ya gotta have the foundations before you move ahead. So get with it, militants-in-training!

Commandeered by Militant Angeleno @ 2:35 AM

I always tell people directions using North/South/East/West directions & when they start to give me a blank stare I use the Mountains as a reference point for where North and East may be. It's crazy how many times I know of people going the wrong direction in LA without even knowing it and have lived here all their lives!

Nothing wrong with using it for local trips by bike or foot, though if you're going anywhere far away, it'll want to route you via a freeway.

And if you *are* driving, you should probably pull over first!

(I'm plugging my own work here--I work at Tellme and worked on this particular project).

just get a fucking compass

When I was little, I always geeked out over my dad's copy of the Thomas Guide. He ended up getting me one for Christmas. I was a weird child.

Since I moved out to Philly I have no freakin idea where North/South/East/West are. There is just nothing at all to give you any sort of indication. I hadn't realized before that growing up in LA made directions come so easily to me because of having the mountains and oceans (ok, and freeways) as landmarks.

Chicanaskies: One or more of the Militant's parents, be they biological, step or foster, may or may not have lived in Philadelphia when they first arrived in this country in the late '60s. They said they could find their way around by spotting William Penn atop city hall, which, like here in Los Angeles, was the tallest building at the time.

The Militant has been there himself. Isn't it a simple grid quadrant city with Broad and MArket forming the main dividing boundaries?

Getting lost is easy in newly built sections of Los Angeles County. Thats why Thomas Hermanos can continue to sell new books each year.

In addition they have renamed streets, thus some people are puzzled when the oldtimers refer to Macy Street or Santa Barbara Street.

Why get a compass when you can get your orientation by the sun? Well sometimes it is overcast and you can't see where the sun is located.

My brother is soo into militant things even though he could not become one. I am surely going to share this post with him while I Take My Chemistry Class Online because I cannot take a chance of missing yet another of my chemistry classes and risking my attendance ultimately.