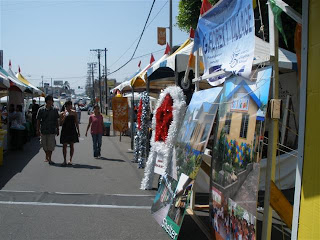 The community of Historic Filipinotown celebrated the sixth anniversary of its designation on Saturday with a street fair on Temple Street, between Union and Alvarado. The Militant, with only a small window of time to check out the festivities, was able to see most of what he could see; the festival site was only two blocks long -- one with booths/entertainment and another, a Kids' Zone, which apparently hardly had any kids in it (they were apparently freaked out by all the freaky-looking carnies working the rides...). He did run into some operatives there, and wanted to check out the food booths, but instead decided to spend most of the time in the confines of a nearby restaurant...a nearby air-conditioned restaurant, that is. 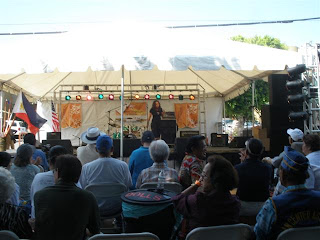 There was an entertainment stage that featured not only Filipino American and overseas Filipino acts, but Latino acts as well, as though Hi-Fi is dotted with several Filipino institutions (a free bus tour took visitors to those locations during the festival) the majority of its reisdents are Latino. Though, judging from the crowd, there weren't many non-Filipinos in attendance.

The community celebrates the anniversary of its designation by the City of Los Angeles on the first weekend of August each year, and in past years they took place in the more residential streets. But this was apparently the first time Temple Street was closed in part for this festival, which didn't make too many motorists by Temple and Alvarado happy; as there was construction going on along Alvarado in addition. Of course, the Militant, as you know, didn't have to deal with the traffic or parking limitations...
Commandeered by Militant Angeleno @ 1:52 AM