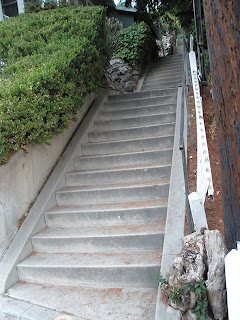 While doing hours upon hours of intense Militant research, the Militant stumbled on a page (well, a .pdf, really) about something called the Franklin Hills Public Stairways.

According to the page, the 14 publicly-accessible concrete stairways, nestled among the winding roads in the hills between Los Feliz and Silver Lake, were built in the mid-1920s "as a shortcut to get to the trolley lines."

You know the Militant loves Los Angeles history, especially transportation history, but as far as his extensive Militant knowledge of the trolleys of old...there were no such lines running through or even adjacent to the Franklin Hills! None of the Red Car lines did, and neither did any of the Yellow Car routes, as those maps indicate. Just goes to show that Angelenos hold a special place in their hearts for the old trolleys, even if their minds don't really recall them all that well.

Regardless of mistaken, though well-intended, historical recollection, the Militant wanted to check them out for himself, so he rode his trusty two-wheeled chariot down Hyperion Avenue and up (okay, he walked, it was rather steep) a little backstreet called Udell Court. There, amidst quaint early 20th-century era two-story houses, he found one of the steps, in its longest continuous stretch (pictured above).

The rest of it was not so much a bike ride, but rather a bike haul, as the Militant had to carry the damn thing up the steps. But hey, the Militant will do anything for a Militant adventure!

As he ascended, he discovered that some of these 1920s-era steps get very little use in the early 21st century, as some of them were covered in fallen leaves and cast-off tree bark. And those that do use them probably only use them to walk their dogs, as random dog droppings can be found on the steps. But looking back, the Militant treated himself to an awe-inspiring view of the hils of western Silver Lake, accented by the sight of the moon and the swirling reddish-colored stratus clouds of the dusk hour. 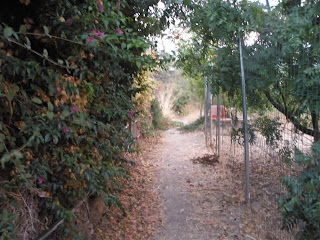 Forging ahead, the Militant found that the stairway gave way to a flat paved path (pictured left), albeit covered by leaves, weeds and other overgrown flora. Welcome to the jungle. Aside from cautiously avoiding physical contact with some of the plants (ya never know if it's posionous or not...), the Militant was intensely fascinated with the fact that he's walking through a part of town that he'd passed by so many times, yet never actually set foot upon.

Up another incline, carrying the bike and getting a workout in itself, the Militant finally approached the top, at Mayview Drive, crossing paths with local joggers/walkers who preferred to stick to the streets and sidewalks. But hey, navigating the road less traveled is what the Militant is all about, right? 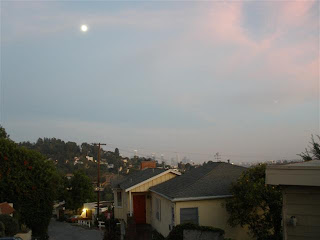 With the roads still steep, the Militant walked his bike up the winding, inclined street. But looking back, he discovered himself surrounded by red-roofed Mediterranean-style homes and killer views of Hollywood, Mid-Wilshire and Downtown Los Angeles! (pictured right) The only thing towering above was the sky, the moon, or the occasional palm tree.

The Militant, consulting his .pdf printout, was looking for the set of steps called "Prospect Walk," which leads one to the eponymous street. But as always, the journey's much more interesting than the destination: The roads started to level off, and even descend, and the Militant found himself a fun coast downhill which made schlepping the damn bike up all those steps totally worth it.

Looking at the nearest street sign, he found it to read, "Franklin Avenue" (no, not that one) , followed it and soon saw the familiar sight of the Shakespeare Bridge -- which, as you all know by now, was built to cross the old Sacatela Creek. After that, he rode off into the sunset, returning to his compound...

The Militant did learn a few things during his urban adventure...
Morepicstime! 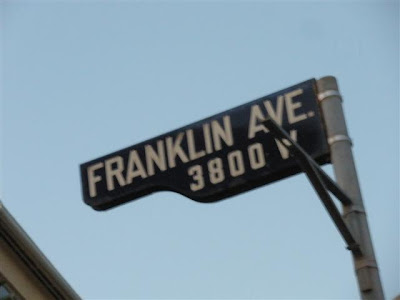 The Militant gives a massive shout-out to Mike, Maria and TKFKABT. 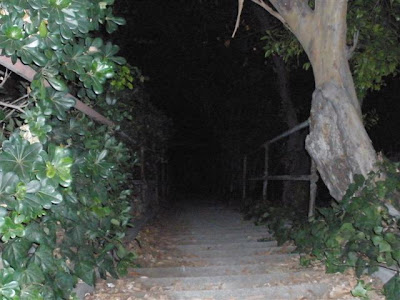 The "Radio Walk" section of the Franklin Hills Public Stairways. So spooky-looking after dark, you'd need to bring a radio with you to keep you company. Preferably a large boombox. 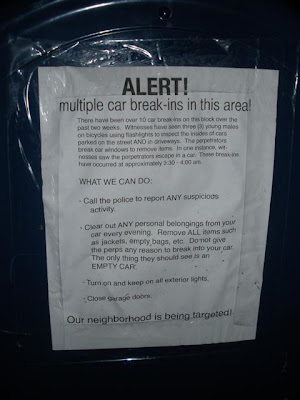 A notice taped to the mailbox at the top of Radio Walk warning residents about recent car break-ins...the cuprits? Young males on bikes. Though the only thing the Militant took up there was photos, he instantly felt like public enemy #1 up there after reading this (even if that "young" description is debatable). More proof that people in upscale, hilly areas simply do not like people on bicycles.
Commandeered by Militant Angeleno @ 9:46 PM

Nice informative and funny write up.

Rumor has it those quaint homes you passed on Udell Court were once movie-studio summer cottages loaned out to a few big-name celebs filming in the area back in the 1920s-30s. Yours Truly tried to interview several Udell homeowners about this legend in 2005, but got nowhere. Something tells me that if you pursued it, you'd have more luck getting the locals to talk...

Aren't those stairs within a mile of Hollywood Junction on the Red Car Line map, or Virgil and Fountain on the Yellow Car map? That makes that about a 20 minute walk, certainly doable.

I am intrigued with the Echo Park Stairways.They even have a tour if you want to know really intresting history. It's chill just to sit back chill on the stairs overlooking nice views

Thanks for the mention, Militant! Maria and I used to climb those stairs all the time, especially Radio Walk and Prospect Walk.

Mike Imlay: What, you want the Militant to reveal his identity?!? But srsly, it's not very likely that many of the residents there lived in Franklin Hills back then, much less were even born yet. But according to the Militant's research, your hypothesis may very well be correct.

John: A 20 minute walk? You're easily forgetting the kinds of shoes people used back then...

Dona Junta: Where do they give the tours?

Militant: Current owners would likely have been provided a copy of the title search when they bought their homes -- or perhaps even been told of their house's history by the RE agent when they bought it. (I learned the names/ occupations of my Silver Lake home's original 1926 owners that way.) The trick is getting the current Udell owners to share that info with the world....

Bike Girl recently repurposed a long-abanoned fountain on one of these stairways to become her own little vegetable patch.

Those are spooky photos!