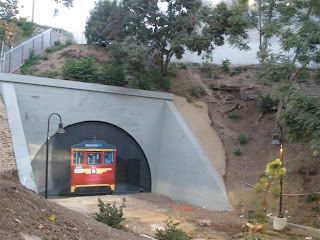 After Curbed LA recently mentioned the new Red Car mural in the old Pacific Electric tunnel behind the recently-opened Belmont Station apartments (house music on the website?!?! wtf?!? what do they think it is, a Pinkberry?) on 2nd and Beverly, the Militant instantly informed one of his operatives about it. As you may or may not recall, the Militant and the operative, who currently lives in an unspecified state that neighbors California, surveyed the site nearly a year ago. This weekend, the operative returned to town and made arrangements to meet the Militant at the site.

So at approximately 19:30 hours on Saturday evening, the Militant caught up with the visiting operative and guided him to the site. So there it was, sitting behind the metal fence.

"Can we get inside?" asked the curious out-of-state operative.

"Not likely, this is private property now."

A blue-shirted security guard paced back and forth along Toluca Street, and the Militant, already expecting a bucketful of 'tude, was ready to give up and leave. But the operative was persistent.

"Can we get inside?" he asked.

"Other side," said the security guard.

Hmm. Maybe the Militant gives up too easily. A tenant entered the Toluca Street gate with his car, but seemed to wait an abnormally long time for the gate to swing open. When it finally did, it swung in a way that almost damaged his car had he not reversed quickly.

"You live here?" the Militant asked.

"Guess they're still working out the bugs here," the Militant explained.

The Militant, pushing his bike, and the operative followed the car into the parking garage on foot. The operative approached the nearest door facing the tunnel which revealed a stairwell. One flight down led to access to a walkway in the back, yet not full access to the tunnel.

We snapped pictures of the "backyard," and reminisced the time when we, along with a group of other militant history buffs, may or may not have gone on a trek into the Pacific Electric tunnel. It was at that point a dude in a suit popped out and asked what we were doing here. The Militant expected the bucketful of 'tude again, and was already making plans for his departure of the facility. But the operative got in an honest conversation with him, and the Militant mentioned that we weren't trying to tag the property, and the Belmont Station staffer was actually real cool to us. Though the operative kept asking if we could go down straight to the tunnel entrance, the staffer said it wasn't possible "at this moment" since the dog park area is still a construction site and alluded to the inevitable liability issues. No prob. 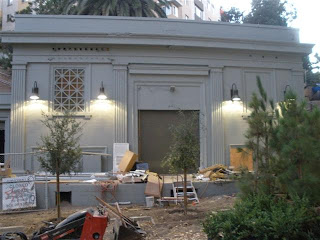 We enlightened him more on the history, of whih he was somewhat knowledgeable of, and he did ask the Militant about the other end of the tunnel, by which the Militant informed him that, coincidentally, the other side also became adaptively reused as housing. The apartment staffer also said that the (slightly larger than) life-sized mural of the Pacific Electric trolley on the tunnel face is still being worked on by the artist. Incidentally the number of the trolley car reads "51." The PE never numbered their cars in double-digits, but the "51" was a reference to the nearby Toluca traction power substation (pictured right), which had the #51 designation.
The substation, as the Militant pointed out on Curbed's comment wall, had nothing to do with passengers but everything to do with converting electric power to the streetcars' overhead electrical system. 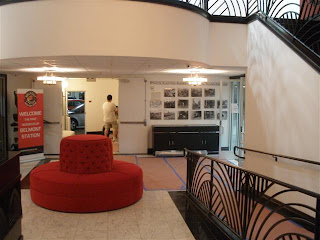 The staffer led the Militant and the operative to the lobby (pictured left), where a neato display of PE historical photo goodness, organized by a local railroad historical society, was on the first and second floor walls. They're open to the public, so anyone visiting the Belmont Station lobby is free to peruse them. The photos show both sides of the tunnel during their construction in the early-mid 1920s, as well as other historical glimpses of the trolley cars.

The Militant showed the visiting operative the still brand-new Vista Hermosa Park across the street, where he was totally enamored with the killer Downtown skyline view and the little cascading stream. Afterward, he loaded his bike onto the operative's truck and the Militant proceeded to show him some of the developments in Downtown, before they grabbed a bite to eat at Downtown's Wood Spoon Brazilian restaurant on 9th and Main (review coming up in the Militant's Mess Hall soon...whoa, the Militant hasn't touched that thing in months!).
Commandeered by Militant Angeleno @ 11:57 PM

But Elson did post my photo of the event.

Darrell: The Militant and the aforementioned operative were last there in the mid-1990s. He doesn't recall anyone in the party with your name. Or maybe he does.

Ha ha I was sappose to move in there with a friend but could not at this point b/c school and work but yeah good coverage, she should be moving in this week under low income of course cause we aint no ballers lol
but I still miss the old Belmont yard =(