When Los Angeles Comes To Hollywood 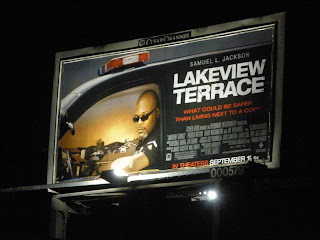 For the rest of the world (or, more accurately, those who live outside of the state of California), somehow believe Hollywood is larger than Los Angeles, or worse, don't know where Los Angeles is, but they can point to where Hollywood is on a globe. It has, after all, a 200-foot long sign plopped on a hillside. So naturally, for them, it's inconceivable to think that Hollywood is merely a community that's a subset of Los Angeles (Of course, there are two "Hollywoods," but that's a topic for another (rather lengthy and didactic) post...).

As the Militant biked through Hollywood on Friday night after having dinner with a group of operatives, he suddenly found this (pictured above) perched atop a building on Vine Street - an advertisement for an upcoming Sony Pictures flick starring Samuel L. Jackson, called Lakeview Terrace (the tag line: "What could be safer than living next to a cop?" Oooh, let the Militant guess...a 'bad cop' movie? How original...).

Certainly bad cops aren't strangers to the LVT, as this guy can surely attest. But rest-assured, northeastern SFV residents, the movie is just fiction, since everybody knows LAPD officers don't even live within Los Angeles City limits (OH SNAP!).

But lest you think the Militant has a huge amount of disdain for the LAPD, he actually respects them very much, knows a few officers by name (in a good way, that is), and never had a bad experience with any member of this City's police force (in contrast, those suburban cops, they can be real a-holes, though...).

But this post wasn't meant to be about the police (no, not that one), so end this tangent we will. What do the people in the actual Lakeview Terrace think of the film? Will they want to see it? Will they want to avoid seeing it? Or will they just order it off of Netflix? The Militant thinks it's rather peculiar to have movies named after actual communities in Los Angeles. Besides Lakeview Terrace, there's South Central, Echo Park, Encino Man (a stretch, but it counts...), and the most famous film named after a Los Angeles community - Chinatown. Did the Militant miss any?

It's not a movie but a tv show about the community I live in, both named Lincoln Heights. Instead of being something about the interesting mix of Mexicans and Chinese in the neighborhood, they turned it into a "bad" neighborhood where the main problems are the antagonism between white and black folk. Lame.
http://chanfles.com/blog/?p=137

@viewfromaloft -- man! extensive list! I was all happy to contribute one of my favs, "Miracle Mile" but you skunked me! Great list!

viewfromaloft: Ed, the Militant was only restricting that list to communities within Los Angeles City Limits, so East L.A., Beverly Hills, Inland Empire, etc would have to be left out. :) But if you need to go there, you forgot Beverly Hills Chee-WOW-Wa...lol

Often Boyle Heights falls under the East L.A. umbrella, even though locals know that East Los Angeles is unincorporated county. Since Marin is a native, and wrote "Soto Street, We Love It!" for the song, I added it.

Beverly Hills? No excuse. You're right.

I.E.? Homeland pride that an obscure name fabricated to denote a region was picked up by a favored director.

If you have Encino Man, What about Valley Girl?

Hey, everyone is forgetting Mulholland Dr; a David Lynch classic.

Alex: Mulholland Drive is certainly a well known street -- but is it a community per se?

The UK and France release name of the indie movie Quinceanera was "Echo Park, LA"