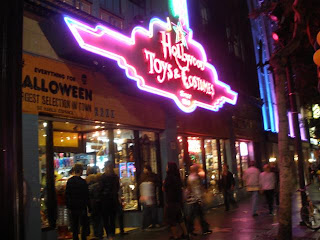 The Militant, not only lacking in posts lately but a rather procrastinating kind, set out to acquire elements of his Halloween costume on Thursday night. After a quick net search, he realized the best place was the most obvious place: Hollywood Toys & Costumes, right on the boulevard.
As expected, he rode his bike there, and was able to find adequate bike parking horseshoes installed on the Walk of Fame. And also as expected, the costume shop was pure mayhem.

The business hours displayed at the window lists the closing time as "7 p.m." Of course, this being All Hallows Eve Eve, and this being past 8 p.m. when the Militant was in there, they weren't gonna close anytime soon. The Militant, only after a few minutes browsing, was able to find what he was looking for; a missing element in his unspecified costume, which he will wear in public on Friday (This costume non-description may just be a ploy as he may or may not just decide to dress up as his awesome camouflaged self (who's gonna notice, right?) for the 31st). 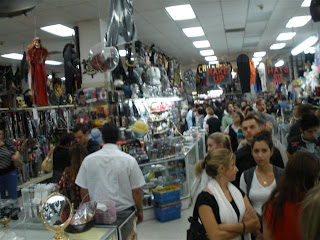 Finding the missing costume element was the easy part. Next was purchasing the damn thing. Outfitted with just three cash registers, the checkout like stretched as far south as Sunset Boulevard (okay, just an exaggeration, but it did stretch for nearly the entire depth of the storefront). Of course, this being Halloween Eve, the Militant was way willing to tolerate the long-ass queue of fellow procrastinators (pictured left).

The line moved faster than expected and people were rather civil. After making the purchase, the Militant decided to just stand outside with his bike on the Boulevard, watching the healthy-sized throngs of people stroll up and down the Walk of Fame, a few already in costume, a few carrying their costumes, and others already sharing their 'Ween night party plans with their group of friends, or via cellphone.

An ambulance wailed through the Boulevard, halting the slow march of cars, reverberating though the canyon of clubs, souvenir shops, restaurants and theatres. He appreciated this little take-for-granted urban scene, mainly because when he's on the Boulevard, he's either walking, riding the bike or driving -- either way, he's always in motion. But this time, he just stood still, and took it all in. 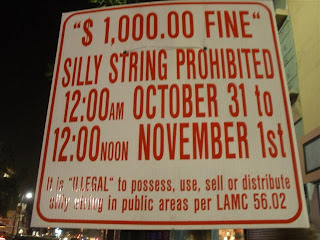 On another note, here's a sign (pictured right) that's posted all through the Boulevard, warning revelers on the City's anti-silly string ordinance. Possessing the streaming stuff can cost you a grand.

Of course, it raises a few questions:

Can't anyone use quotes right any more?

Bad punctuation on signs probably wouldn't stand up as a defense in court, though.

Thankyou for sharing this information. i will soon visit again.
descendants 3 carlos costume