Craft Beer Fest LA: An Outbreak of the Stein Brew in Echo Park 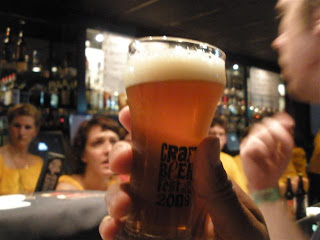 When the Militant first heard of the Craft Beer Fest LA, he was concerned, by its imagery and location, that it would be some sort of annoying hipster circus that even his hipster repellent couldn't even overcome. But still, the Militant loves his beer, especially of the microbrew variety, so he decided to check it out after all on Saturday. At the very least, he won't see the hipsters suck on cans of Pabst Blue Ribbon (lol, the Militant just said "hipsters suck").

Then when he got there, not very long after the event began, there was a long-ass overflow line greeting him on Glendale Blvd, just below the Sunset Boulevard bridge. Fortunately an operative spotted the Militant and was able to fast-track his entrance through unspecified means (Militant connections, suckazz!)

So this is how it worked, at $30 a pop, each guest receives a beer glass and 15 tickets. Each ticket is good of one fill of beer, bringing the cost to $2 per fill. The event was also a benefit for a nonprofit called 826LA (the number, according to someone from their outreach booth, is a reference to the mother organization's address in SF) that does after-school tutoring for local kids. Pause for the cause! 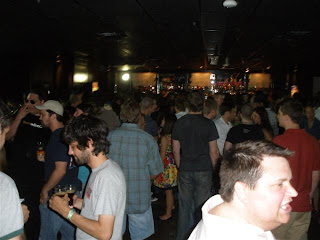 This was the first time the Militant entered the Echoplex, at least to his recollection. It was like a dark dungeon of forgotten time...and lots of beer. Two lines formed, to the side and to the back. Brew flowed from the onsite bar taps or from makeshift taps fashioned from portable dispensers.
The Mlitant soon discovered the the line to the very far left in both instances yielded the shortest line by far, so that was were he was found.

About 28 beers were available to sample, from California craft brewers such as Craftsman, Hangar 24, Lagunitas, Sierra Nevada, Pizza Port and Firestone Walker. Most were of the ale variety, especially IPA (and the Militant isn't a huge IPA fan), but the stuff was still way better than any corporate American brew, and almost always high in its alcohol content, with some reaching as far as 10%. 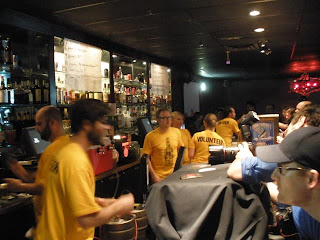 Some of the Militant's favorites, as far as he could remember, included Hangar 24's Orange Wheat, TAPS' Belgian White and Lagunitas' Barleywine.

There was also free "pub grub" to satiate some appetites, but even two hours into the event, most of the food was gone, or was so little in supply that it went quick. East Hollywood's Scoops and Pure Luck Restaurant gave away beer-related ice cream and cupcakes respectively, and Echo Park's Masa from down the block offered pizzas, while the LA Burrito Project dispensed vegan burritos and Nicole's Gourmet Foods handed out cheese and roasted cashews and pecans all event long.

The latter even made a video and "discussion" presentation onstage in between musical entertainment to extol the virtues of beer and cheese, as an alternative to the wine-and-cheese culture. Surely the vegans would cringe with that one, but the Militant was cool wit dat.

Ther was a taco truck out in the back, but the tacos were not free. The Militant passed.

Overall, the Militant thought it was a very cool event for a first-time thang. The crowd was, thankfully, not total hispter but a good cross section of 20-to-40-something Southern Californians who are wired enough to know about these events, and the Militant saw random operatives in there as well. The main consensus complaint was crowd control -- not that the crowd was unruly (and for an event centered on lots and lots of high-octane brew, people were extremely cool and chill) -- but a long line of people had to wait outside while the crowd inside had to maintain legal crowd capacity (lest Fire Marshal Bill pays a visit and shuts the party down). Hopefully future Craft Beer Fests could take place in an outdoor setting. 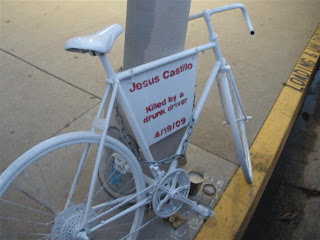 As the Militant stumbled out of the place in a happy buzz, one sobering image hit him -- directlyacross the street was the "Ghost Bike" installation (pictured right) in memory of a local cyclist named Jesus Castillo who was carelessly struck and killed...by a drunk driver.

The Militant left towards the area of his compound on the (M) Local bus.
Commandeered by Militant Angeleno @ 4:01 PM

$30 a person?!? That shit is whack. As a homebrewer (http://chanfles.com/bnb/index.html) and beer aficionado, I've been to my share of craft beer events but this one seems to cater specifically to the hipster/yuppie crowd like no other beer event. That's only $10 less than the American Craft Brew Fest which features 300 beers. http://beeradvocate.com/acbf/

Maybe you had fun at this event, but yer gonna lose some militant cred for attending. I'm just saying.

826LA is an "I feel good about helping the poor" joke. And a grant driven enterprise that isn't so cuddly once you really break it down.