Smile! You're On Militant Camera! 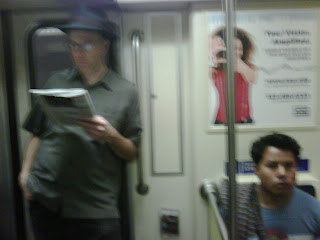 The Militant gets around, and we all know that. But the Militant may or may not run into some familiar (or unfamiliar) faces during his Militant activities. Sometimes he spots celebrities or other public figures, but he's more excited about spotting some of his fellow local bloggers!

On Tuesday, the Militant happened to spot Randall "BusTard" Fleming (pictured left, standing) of The Bus Bench blog, riding the (M) Red Line to Downtown! He was spotted doing some marketing, dropping "Bus Bench" promo cards into the subway car's pamphlet holder (bottom of the pic). The Militant wasn't sure whether it was really Mr. BusTard or not, but this video, of a Measure R debate last October (he was against it, btw, lol) confirms it was him (Since he appeared as himself in a public forum, that means that he is not maintaining anonymity -- the Militant respects the anonymity of his fellow anyonymous bloggers and will never reveal their identities on This Here Blog - Blogger's Honor!). So, whatup, Randall!?

The Militant can see you, but you can't see the Militant!

(Disclaimer: The Militant does not stalk, and never has stalked, anyone (Well okay, there was this one ex-girlfriend, but that was yeeeaarrrs ago). He's just a watchful observer!)
Commandeered by Militant Angeleno @ 11:47 PM

Yes, that is indeed the BusTard.

Yep, that's me with my finely-topped bald olde head covering a badly worn brain. (Lemme offer my appreciation of your bicycle as well as your appreciative manner of being on the train with it, MA! Seriously; no irony.)
Those girls to my right were annoying, no? All that "Go! Go! Go!" chanting garbage. What the hell is wrong with kids these days?

it's a small blog-o-sphere after all hahahah

BusTard: As you would expect the Militant to say, he may or may not have brought his bike on the train on Tuesday!

The Militant has actually met a good number of our local blogosphere, though virtually none of them had any idea they were in the presence of the Militant! Muhahaha...