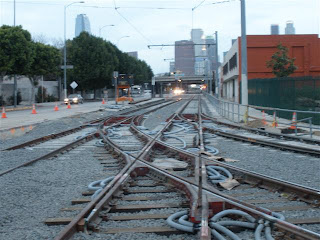 This is pretty exciting stuff. It's the first time the alignment of the 20-year-old Blue Line tracks have been altered, for a line that was initially conceived of in the early 1990s as a mere branch of the Blue Line going to Exposition and Vermont.

As you can see from the tracks, the paving over the tracks have been removed, and the rails replaced with two switch tracks and a crossing track, with the curved tracks belonging to the Blue Line veering east to the Grand Station and beyond; and the straight tracks heading due south on Flower to the 23rd St station and beyond. 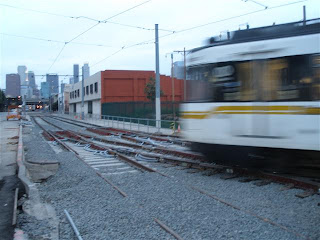 The trains are expected to be operated in a similar fashion as the Red and Purple lines -- with alternating trains from each line running down the tracks. Like the switch track at the Wilshire/Vermont station, this switch here at Flower and Washington will also be automatically operated.

Construction crews have yet to connect the switch tracks with the existing Expo Line tracks on the other side of Washington Blvd, which will happen soon, creating a physical rail connection between Downtown and the Westside.
Commandeered by Militant Angeleno @ 1:53 AM