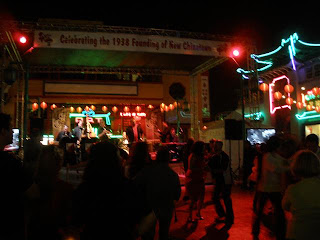 As announced on Friday, the Militant went to the Chinatown 72nd Anniversary Festival on Saturday night.

It was a modest festival, which generally featured Flattop Tom and his Jump Cats playing 40s-style swing music, with a dance floor full of locals and visitors cuttin' up a rug (okay, well a linoleum dance floor) in the middle of Chinatown's central plaza, in the presence of the bust of Chinese hero Dr. Sun Yat Sen. There were probably only a couple hundred people there, and some of those were probably already there to visit the Mountain Bar or the Grand Star Club. The supply of the much talked-about strawberry cakes were already long gone for the night, though the Militant was able to run into some of his operatives who were in attendance.

But the most amazing thing the Militant saw there was foretold in that great Los Angeles invention and Chinese American icon: the fortune cookie.

See, a booth run by the Chinatown Business Improvement District had a plate of wrapped fortune cookies on a plate, and the Militant, who loves anything and everything free and swaggy, instinctively open and ate one. It read:

See, the Militant may or may not have traveled the world and may or may not have been to Hong Kong, which boasts a legendary nocturnal bazaar in its Kowloon district. Everything from souvenirs to clothing to knickknacks to arts & crafts to electronics to, yes, pirated music, movies and software are sold there. "What an awesome thing to possibly have in Los Angeles (sans the pirated CDs and DVDs, of course, heh)," the Militant thought...er, assuming that he did, in fact, ever visit Hong Kong. 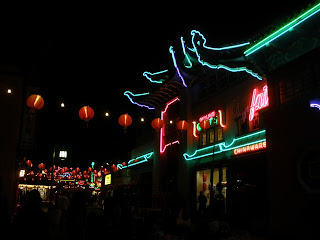 The Militant chatted with one of the Chinatown BID representatives there who gave him the skinny: In August, every Saturday night will feature an outdoor night market bazaar located in Chinatown's Central Plaza (between Broadway and Hill Street), West Plaza (Chung King Road, where the art galleries are concentrated) and Bamboo Lane alley (where the Phoenix Bakery is located). There will be arts and crafts vendors, food demonstrations, food trucks and other merchandise vendors there. Hours are yet to be determined. There will also be live entertainment. If successful, the Chinatown BID, who is organizing the night market, may establish the night market year-round, or at least for a longer period of time. The info on the night market is not yet on the ChinatownLA.com website. For those of you who go to the monthly Downtown Los Angeles ArtWalk, the night market atmosphere is expected to be similar to the activity on the parking lot near 5th and Main.

This is pretty awesome stuff, folks. You heard it here first from The Militant. We need more public night events like this to keep our streets vibrant, this is definitely a step in the right direction. Let's hope this fortune becomes good fortune for Chinatown and our City in general.
Commandeered by Militant Angeleno @ 2:47 AM

Awesome! So excited! I hope this gives some life to Chinatown. Hopefully it will be more than just the overflow like after Firecracker?

Oh, this is indeed pretty exciting! Though rather than the usual food trucks I'd like to see some HK/Chinese style street food vendors.