Long Beach Week: Seven LB Buildings You Should Know About

This week, the Militant Angeleno will be featuring the town 20 miles to the south, for no other reason than because he feels like it. Known for a big boat, an aquarium, Snoop Dogg and the harbor, it also has many other unique qualities to it and its own history. The Militant's Long Beach Week will by no means be comprehensive, and you probably won't be some Longbeachologist by next week, but living basically in the shadow of Los Angeles for its entire history, its time to at least give Long Beach some props. So to The 562, this one's for you.

The Militant has spent an unspecified number of days conducting Militant research in The LBC, and will also pay some additional visits this week, all for you, the reader, for the sole purpose of militant knowledge. So let's start with some landmark structures. Here's seven buildings you should be familiar with in Strong Beach:

Long Beach's tallest building, located at the far west end of the city's financial district may not have the legendary status of its deceased New Yorker cousins, but it is part of the same family. Speaking of its famous relative, the 30-story building was designed to visually resemble twin towers when viewed from an angle, with the reflective vertical glass column acting as the space between.

True to its era, it more closely resembles its taller local relatives in Downtown Los Angeles and in Century City, with its glass skin elements and its 45-degree axis off the street grid.

Downtown condos might be a relatively new phenomenon in Los Angeles, but Long Beach, perhaps the sole So Cal city to boast an oceanfront skyline, has been rocking condos for decades. Prior to the LBC WTC, this was the tallest building in town.

The tower's name, whether intentionally or coincidentally, coincides with Long Beach's official motto: "The International City."

LB's most visual historic structure has quite a history of its own. When built, the 17-story French/Tudor Gothic building was the second-tallest building in Southern California, after Los Angeles City Hall. It was the most well-known survivor of the 6.4-magnitude 1933 Long Beach Earthquake, the aftermath of which which created earthquake codes in Southern California.

Movie star Norma Talmadge once owned the building in the 1930s, and lived in its penthouse.

The apartment building also served as living quarters for visiting U.S. Navy officers during World War II, which used the tower at the top of the building as a lookout for enemy ships.

In 1952, Villa Riviera was the venue for the first-ever Miss Universe pageant.

In 1991 it joined its neighbors and went condo. At over 80 years old, it still holds residences today. 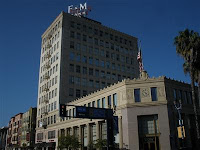 This 10-story building is historically significant in Long Beach as the first skyscraper in the city. Built in an Italian Renaissance style with Greek and Roman elements, it represented its tenant institution well as a major catalyst in the economic growth of the city of Long Beach.

On the more modern side, this 5,000-seat indoor sports venue, on the campus of California State University, Long Beach, is the home to the school's 49ers basketball and volleyball programs.

The Walter Pyramid, one of only three "mathematically true" pyramid buildings in the United States (The Luxor Hotel in Las Vegas and Memphis' Pyramid Arena being the other two).

Originally known as the Long Beach Pyramid, the building changed its name thanks to Dr. Mike and Arline Walter, who donated $2.1 million to the school.

6. Long Beach Cruise Terminal (a.k.a. The Dome Formerly Known To Have Housed The Spruce Goose) (1983)

Believe it or not, Long Beach is home of the world's largest existing geodesic dome. This structure, located next door to some famous boat in Long Beach Harbor, was built in 1983 to house Howard Hughes' ginormous Spruce Goose airplane, which was built here in Los Angeles and flew in LB harbor, albeit briefly, on November 2, 1947. The dome's designer, Don Richter, was an associate of R. Buckminster Fuller, the main jefe when it came to geodesic domes.

After a proposal to build a maritime-based Disney theme park on the site fell through, LB let loose the Spruce Goose in 1992, and it now resides in the Evergreen Aviation and Space Museum in McMinnville, Oregon. The dome is currently used as an oversized Carnival cruise ship terminal.

Aside from the harbor, oil was the primary economic generator in the Long Beach area in the 20th century, with many places in the LBC and neighboring Signal Hill still sporting oil pumps. Underneath the Long Beach and Los Angeles harbors lie the Wilmington Oil Field, and in the eastern portion of it, four man-made islands, decorated with palm trees and towers make it appear from a distance as some sort of resort (they were designed by the same Walt Disney Imagineers who designed Tomorrowland), but all of them actually house some pretty nasty-looking oil drilling infrastructure.

Built in 1964, the islands were named after late NASA astronauts: Grissom, White, Chafee and Freeman -- the first three dedicated to those who perished during the ill-fated Apollo 1 mission, the latter who died in a training flight.