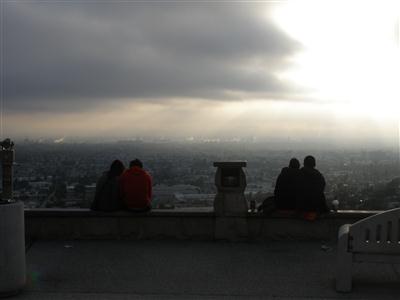 Well friends, Long Beach Week! has now come to an end. The Militant thought he'd close off this series by choosing a Long Beach location that's not even in The LBC proper (Gasp! But it's still in the 562 though...) That place is the 365-foot-high promontory overlooking the area called Signal Hill. Many of you may or may not know the place as its own city, but it's an actual hill.

Like Long Beach itself, it's got an interesting history and is very easy to get to. The name derives not from the communications towers situated at its peak, but from the Tongva -- the indigenous people of the Los Angeles area -- who used this sentinel to deliver smoke signals to their friends across the water in Pimug-na (a.k.a. Catalina Island).

More recently, in the 1920s, oil was discovered on Signal Hill, as it was part of the Long Beach Oil Field which produced 20 percent of the entire US oil supply that decade. Oil derricks once covered the hill so much, it was nicknamed, "Porcupine Hill."

After oil production slowed down (oil pumps still operate on the hill), it became the bougie district for the LBC, with a bunch of rich folks homes being built there.

But despite the upper income element, the place is very much publicly accessible. 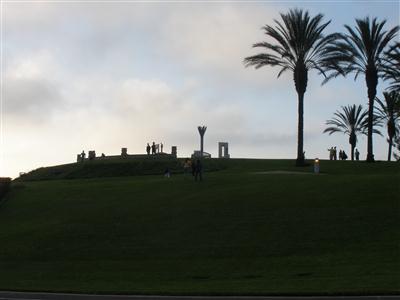 After The Militant's Cambodia Town adventure, it was a simple matter of riding the Long Beach Transit Line 21 bus up Cherry Avenue, where he got off at Skyline Drive and took a not-that-strenuous uphill hike (Though the hill is 365 feet high, the bus will already take you halfway there) up the street to Hilltop Park, a wonderful public space dedicated not just to a killer view, but to the historic legacy of the hill.

In the middle of the part is an art installation that looks like an artificial blue palm tree, but actually symbolizes both the rising column of smoke from the Tongva and the rising gushes of oil from the black gold era. Other elements of the art installation tell the history of Signal Hill.

Although the view was apparently killed by the overcast clouds on this particular day, one can still get a killer view. Couples hung out to watch the sunset together. A photographer was taking snapshots of his modeling client. A Cambodian American couple were taking wedding engagement photos, dressed in traditional Khmer attire.A Latino family was sharing a meal on a picnic table. Others walked dogs or jogged on the Panorama Promenade paved path that runs along the northern edge of the hill, right under some rich people's houses. 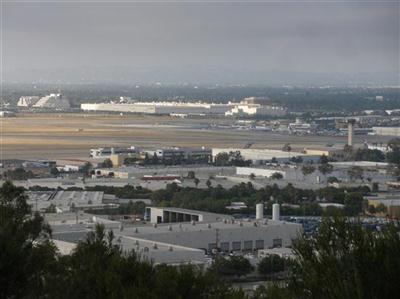 From there, one can get a clear view of airplanes taking off and landing below at Long Beach Airport (pictured right). Cal State Long Beach was easily visible below. A little farther, and one can see buildings in Orange County.

Returning back to Hilltop Park, both Downtown Long Beach and the Long Beach Harbor are in full view. Heck, you can even see Los Angeles Harbor and the Vincent Thomas Bridge. As well as Carson and Wilmington towards the west, where the fierce power of the Southland's oil refineries rage on with wafting veils of stem, smoke and plumes of fire. Look north, just beyond the Compton courthouse building, right through the low clouds and you can see the faint outline of Downtown Los Angeles.

But perhaps the best part of Signal Hill? You can see each and every location The Militant covered in the Long Beach Week! series. Check it:


As the sun set, The Militant marched back down the hill and took a short walk to Willow Street, where he boarded the Long Beach Transit Line 102 bus back to Long Beach Boulevard where he got on the (M) Blue Line train back to Los Angeles. It was a nice couple of days spent in Long Beach doing militant research for this blog series. He truly felt like a tourist in his own home land. Surely there were more adventures he could have written about and places to go...maybe he'll do Long Beach Week, Part Deux! But maybe The Militant hopes you make your own trip down the Blue Line, retrace some of his steps and go on your own Militant adventures in The LBC.


The Militant will leave you with an interactive Google Map on all the locations featured in The Militant Angeleno's Long Beach Week!

Excellent, work on Long Beach. You really got a feel for the place.

One thing you might want to know about how bike friendly the place is becoming, check this out:

They have a shared "bike lane" right down 2nd street in the Belmont Shore district. Cars HAVE TO respect the person on the bike in from of them, and give them the lane in front. Else if a LBPD sees them hustling the rider with their car, they get pulled over, a big ticket, and a nasty lecture.

Not as great as a dedicated lane with a barrier, but the next best thing in a tight place like that.

Cyrus: Thank you very much! Yes, The Militant has heard of the Belmont Short bike lanes, but didn't have the time to make a visit. Certainly future posts on Long Beach, especially that part, are forthcoming!

That's quite interesting. I was a bit turned off by the oil derricks at first but it sure does make up with the other stuff.