(Who's Afraid Of) The Art Of Transportation 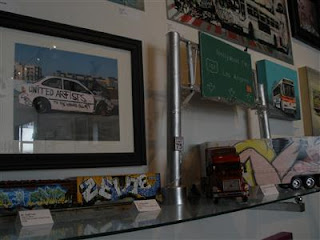 The Militant celebrated four years of blogging with a nice bike ride on Thursday around Downtown Los Angeles. He felt inspired.

Transportation -- of any and every kind -- is perhaps the most consistent visual motif in Los Angeles. From bikes on the streets to bus lines on the boulevards to cars on the freeway to trains underground to airplanes overhead, we're all about coming from somewhere and going somewhere, with several million reasons, feelings and stories interspersed with every block, exit, stop or station we encounter. Transportation inspires us to react -- whether we cuss, relax, pedal harder, Tweet, blog or even create art.

Donwtown Los Angeles art gallery Crewest, which specializes in modern urban art, is currently exhibiting "The Art Of Transportation," featuring the works of over 30 artists, all depicting visual art on or inspired by various transportation vehicles: from trains to planes to automobiles (buses, bikes, trucks and freeway infrastructure are well-represented too).

Many of the pieces are works of graffiti artists who do pieces on railroad freight cars, some of which are photographs of their pieces. But a few of them have put their pieces on model railroad cars, which are part of the exhibit as well. 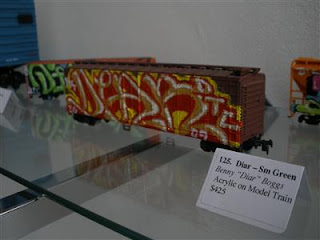 One of the artists, Benny Boggs, who goes by the graffiti name "Diar," has a few pieces displayed on G- and HO-scale boxcars (pictured left). What makes his story remarkable was that he was paralyzed from the neck-down in a car accident in 2008, but that didn't let him stop his desire to create. Since then, he's done paintings and model train graffiti pieces -- painted with a brush guided by his mouth. 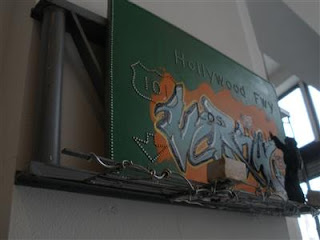 Aside from a couple paintings and models of graff'd-out NYC subway cars, this exhibit is undeniably Los Angeles, with the familiar local images of miniature freeway signs as a canvas, photos of Metro Rail trains, local freight railroads, even a painting of an old-school RTD bus (That's Metro's predecessor agency for all you newly transplanteds). Best of all, most of the artists are native Angelenos/Southern Californians, so they ain't frontin'!

In case you don't know, this exhibit is MILITANT-APPROVED and y'all should check this out before it closes down on June 26. Crewest is a little east of Gallery Row, around the corner from Blossom Vietnamese restaurant on Main. It's a 4 1/2 block walk from the (M) Pershing Square station. Or you can just bike in -- they were even cool with The Militant bringing his bike inside!
Commandeered by Militant Angeleno @ 9:40 PM

Many of the items are performs of graffiti performers who do items on railway shipping vehicles, some of which are pictures of their pieces