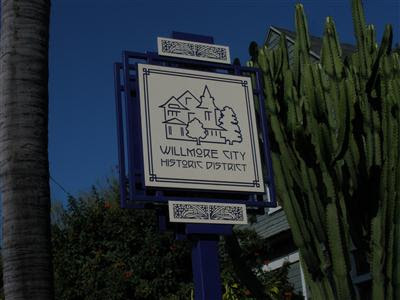 When we last left The Militant Angeleno, after appreciating Long Beach's most notable structures, he journeyed to The International City via Blue Line and bicycle to survey a unique concrete bridge, under which Pacific Electric Red Cars ran up until over 60 years ago. As he left, he had a brief encounter with that city's bike infrastructure, and found himself deciding whether to head back to Los Angeles, or continue his Militant mission in The LBC...

He could have taken the Blue Line going south, but he decided to keep riding along Long Beach Blvd, just to experience what it was like to ride in this town. He experienced creatively-designed bicycle racks on the sidewalks, some shaped like pizzas, ice cream cones or cupcakes, some designed like stick figures on a bike. He headed west on Anaheim Street and turned due south just before reaching the Los Angeles River.

Without knowing anything about it, he noticed that the street signs looked different here -- this time, blue on white, with "Willmore City Historic District" emblazoned on the post-side end of the signs.

Now, for those of you coming to read The Militant's blog for Long Beach Week! (Yes, the exclamation is part of the title) expecting to get some sort of history lesson on the place, today is your lucky day.

Aite, so here's LB history in a nutshell: Like most of So Cal, Long Beach's history traces back to the old Spanish rancho land grant system. Two ranchos - Rancho Los Cerritos and Rancho Los Alamitos, encompass today's Long Beach. Both were owned by soldier Manuel Nieto in 1784. In 1843, the former was sold after the death of Nieto's daughter to Massachusetts cattleman Jonathan Temple (who later served on the first American-era Los Angeles City Council and was the namesake of Temple Street). In 1866, Temple sold the the land to rancher Llewellyn Bixby, whose family (the Bixby Knolls neighborhood in northern Long Beach was named after them) developed the general area.

Oh yeah, in case anyone is wondering whether RLC is related to today's Cerritos, it definitely is. The northeastern corner of RLC eventually became the city of Dairy Valley, which re-named itself "Cerritos" ("little hills" in Español) in 1967.

In 1882, some 4,000 acres of the RLC was sold to developer William Willmore, who established a town called "Willmore City' (egotistical, much?) in an area towards the coast.

That year, Willmore City boasted the first-ever rail transit system in Los Angeles county, known as the American Colony Railway (pictured left), which ran three miles from Willmore City to the town of Wilmington to the west. The train, originally powered by an actual horse pulling cars on a wooden track (talk about old school!) was colloquially called "The GOP Railroad." No, not a railway for Republicans, but rather, because the train was prone to breaking the wooden track so often, passengers would have to Get Out and Push(!)

In 1888, Willmore City residents renamed the city "Long Beach." Was it named after New York state's Long Beach (BTW, the Militant visited there once, and it's rather pathetic)? Some dude named "Long?" Nope. The place literally had a long, wide beach. End of story.

In 1902, the Pacific Electric Railway arrived, and things boomed from there. For the next eight years, Long Beach was like the fastest growing city in the entire nation. 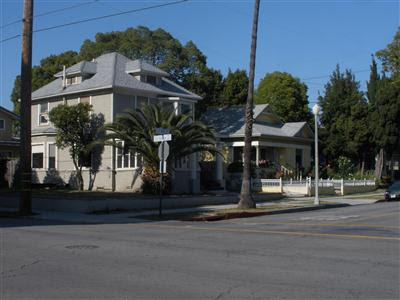 Today the LBC's birth name lives on as a historic preservation residential district just northwest of the downtown area. It sports quaint, wide, tree-lined streets, late 19th-early 20th century architecture and a seven-acre green space called Drake Park. The Militant found a Mayberryesque small town ambiance there (though the demographics are much more diverse), and even biked in the middle of the street for a considerable distance before encountering another car on the road. It's a pretty chill place.

So there you go. Long Beach's history is relatively new; by the time "Long Beach" existed, there was already an El Pueblo de Nuestra Señora la Reina de los Ángeles del Río de Porciúncula in existence for some 107 years. In some respect, Willmore City is Long Beach's equivalent to Los Angeles' El Pueblo (though LB's version of the Avila Adobe would have to be the Rancho Los Cerritos adobe (where Jonathan Temple and later, Llewellyn Bixby's brother Jotham lived) some four miles to the north. 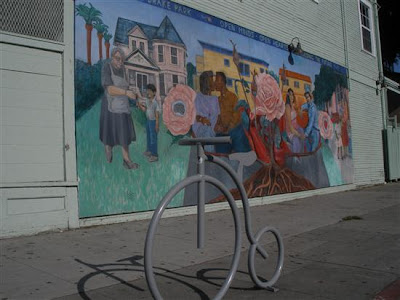 If you want to visit Willmore City for yourself and get a feel for Old School Strong Beach, it's rather easy. Just ride the (M) Blue Line to Long Beach, get off at the Pacific station, and walk or bike anywhere to the north and west. If you reach Anaheim Street or the Los Angeles River, you've gone too far.
Commandeered by Militant Angeleno @ 7:18 PM

Thanks so much for these articles.

mchean: No prob! The Militant takes it you're an LB local?

Great posts! Long Beach is often passed over in LA-area histories, but it and its port were crucial in LA's transition from small cow-town to world-class metropolis.

One historical note, though:

I think you may have misread the Long Beach Transit page. Its reference to "the first railway line built in Los Angeles County" was not to the American Colony horse-car line, but to Phineas Banning's Los Angeles and San Pedro steam line, which opened in 1869.

The LA&SP became part of the Southern Pacific in 1872, when its stock was included as part of the subsidy offered to SP to persuade them not to bypass Los Angeles on their way to San Francisco.

The first horse-car tram in the LA area was Judge R.M. Widney's Spring and Sixth Street Railway (also jokingly called the "G.O.P" - "Get Out and Push" Railway), which opened in 1874.

By the time the American Colony horse-car line opened in Willmore City, there were already more than a dozen streetcar lines operating in downtown LA.

LA MapNerd: Thanks for the clarification. The Militant knew something sounded unusual. Okay, how's about "The first rail transit system built outside of Downtown Los Angeles?"

Thanks for visiting our little gem. The WCHA (Willmore City Heritage Association) truly cares about our area, im glad that it shows. Plrase feel free to check out our web-site
Willmorecity.org

Bookem: Was glad to make a visit! Do you happen to know what is the oldest building in Willmore City?

Would that be the Golden House?