Carmageddon It On This Weekend 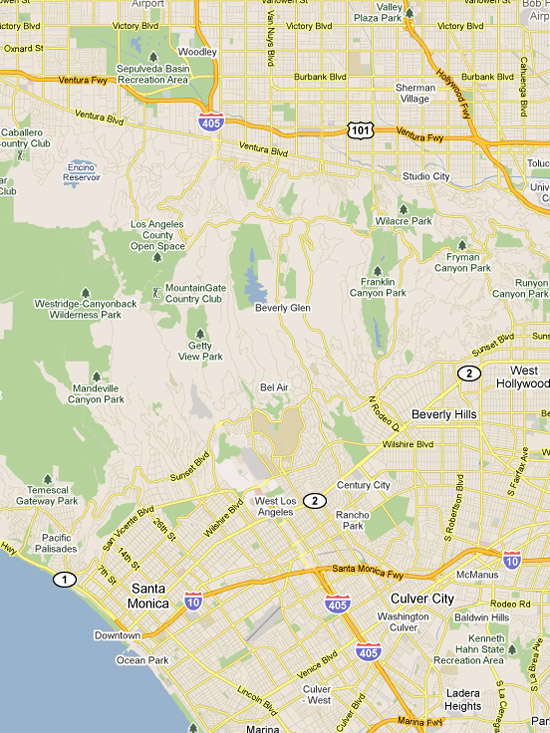 The Militant takes pride in covering things you won't hear about in the mainstream media or in other blogs, so a part of The Militant thinks it's not even worth talking about this. After all, many have already said what The Militant wants to say about this issue.

But here it is anyway, mainly because every issue that "Carmageddon" addresses is something The Militant has long addressed with his own militant lifestyle, and because of that, he is pretty much 100% immune to any of the feared snafus that the prognosticators are forecasting. Haven't you learned already?

• First off, The Militant strongly believes that this "Carmageddon" thing, like Los Angeles itself, cannot be defined by one particular incident or phenomena. It will be greatly changing. There will be some clogged traffic here, and free-flowing traffic there (which...is...pretty...much...like...any...other...day) but, because of that constant change, The Militant, long in favor ot replacing popular buzzwords with his own, will from here on call "Carmageddon," CarmaChameleon.

• You transplants and youngins obviously don't know your history, but in 1984, when we hosted our second Olympics here in Los Angeles (how many of you from other states come from a place that hosted the Summer Games more than once? The Militant thought so), the games, which lasted not just two days, but two weeks, and not just one location, but 28, was originally thought to be an '80s CarmaChameleon of its own (Just substitute all those Honda CR-Vs and Toyota Priuses with VW Vanagons and Datsuns). Of course, back in the '80s, "CarmaChameleon" was real popular, so people probably wouldn't have thought of it as a bad thing.

Thanks to staggered work schedules, people taking vacations, alternate surface street routes, additional RTD bus service and state-of-the-art (at the time) traffic management, we actually had pretty free-flowing traffic, as well as the most finacially-successful Olympic games evar. A younger teenage Militant still has very fond memories of that time in this City...

• Do you really need to drive on the 405 along the Sepulveda Pass? The Militant drives on that thing like 2-3, maybe four times a year tops. The last time he was on it was like August of 2010...11 months ago. Get over yourselves.

• You May or May Not Know that Metro has FREE service on the Red and Purple subway lines, the Orange busway line and a number of Local and Rapid bus lines this weekend. And Metrolink and Amtrak have additional trains (Though not free though, booo...) where they usually don't have any during the weekend. Even if you don't live in the Valley or the Westside, this is a perfect opportunity to take the train or ride a bus somewhere. To shop, to eat, to drink, to party, to socialize, to worship, to hang, or to discover more of your city. You read this blog, right? Ever wanted to visit some of the places The Militant has been to? Well, get to it!

• Speaking of discovery, why not walk or bike around your own neighborhood? The Militant offers you a challenge: Discover FIVE things about your neighborhood that you never knew existed before. List them in the Comments of this post when you're done. And if you give the Militant some lame-ass answer like, "I can't walk around my neighborhood cuz there's nothing here" then The Militant will smack you upside the head, because you're too lazy-ass to try. GET TO IT!

• It's truly a shame that over 10 miles of the 11-mile closure route will go to waste. No SuperCicLAvia? No freeway parties on the 405? Unfortunately Adam-12 will frown on that, citing "safety" concerns (sooo, it's much more dangerous without cars than it is with?). Imagine if the State of California charged everyone $20 and got them to sign a liability waiver instead. Our state budget deficit would be wiped out by lunchtime Monday. Tellin ya... 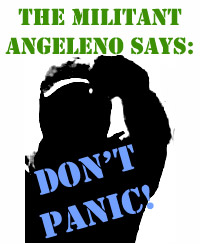 • If you do stay home, do spend your weekend reading The Militant Angeleno's blog post archive! There's quite a bit he's written in the past four years that's still relevant today. There is even a secret code embedded in the posts that will reveal his real name. Crack the code and you may or may not find out who he is!

• Really, this weekend ain't gonna be all that bad. The worse jam that will happen will be no worse than what happens any other day. It's like the freeway version of Y2K, and you know how all that turned out. And even though there will be another 405 closure next year, The Militant can't wait until Tuesday when no one will ever speak of CarmaChameleon again.

My thoughts exactly! I was just thinking, as a young laddie of 14, how amazing it was to be in L.A. for the 1984 Olympics. There was such a great vibe in the city. And I think this is good for L.A.....

Valley Dude: Totally! Everytime The Militant hears Michael Jackson's "Human Nature" on the radio, he can just close his eyes and imagine it's 1984 again. Although it's a little tricky when he's driving.

lol... git-em Angeleno, I agree if everyone stop worrying about it there wouldn't be so much drama when it happened.

The Media people all live in the Valley/Westside. Did we hear anything about the I-5 closures in Norwalk or the upcomming 710 closures ? Didn't think so.

A little after the fact but I said the same thing about the freeways in 1984. I was a volunteer hostess at the USC Olympic Village and the commute to and from Monterey Park was a breeze. Carma-whatever was all about crying wolf.
Marissa