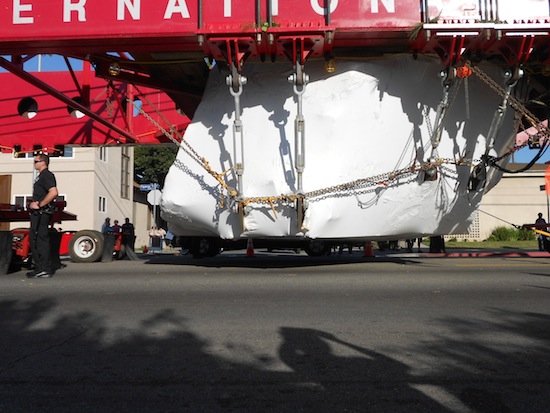 Here in Los Angeles, we commemorate the anniversaries of earthquakes and point out our faults (pun most obviously intended, be warned, this post is full of 'em...), but never before has geology otherwise been the talk of the town for an entire week.

Tonight is the final trek of Levitated Mass' hundred-mile journey (at five miles an hour, so everybody sees you) from its birthplace in a Riverside quarry to its new home at the Los Angeles County Museum of Art in Miracle Mile. There are celebrations anticipated tonight for the big-ass rock's arrival. There's even a 3K footrace and a group bike ride (Critical Levitated Mass, anyone?) You can say an entire city has been...stoned. You can say that we've been bouldered-over. You can say that this event has Levitated Mass appeal. You can say...uh-oh, the Pun Police are coming.

Now, some people have scoffed at the $10 million cost of bringing a big-ass rock through city streets. But think about it for a second: With roughly 10 million people in Los Angeles County talking about this thing all week, it's a genius marketing campaign to get people to visit (and possibly become donors) to LACMA -- at a cost of $1 a person!

To honor the arrival of LM tonight, DJ Militant Angeleno has cooked up a music playlist of appropriate tunes to celebrate the journey. Feel free to play these tunes at full blast from your car stereos, boom boxes or those mobile bike trailer sound systems!


"Like A Rock" - Bob Seger and the Silver Bullet Band
You're probably more familiar with this song hawking Chevy Trucks back in the '90s, but imagine the kinetic energy building up as Levitated Mass begins rolling on along north from Figueroa and Gage tonight. It's making its declaration after spending all day in the 81-degree sunshine:


"I'm Stone In Love With You" - The Stylistics
Art Laboe would approve of this slow jam classic. An entire city has fallen in love with a 340-ton boulder. Need The Militant say more?

Where do we go from here?
Which is the way that's clear?

North on Figueroa then west on Adams, that's where. And thank your lucky stars the Metro Expo Line was built underground through here so as not to interfere with the height of the rock and its ginormous transport machine...otherwise we'd have to wait until like 2014 for the thing to open.


"Rock With You" - Michael Jackson


"Rock Around The Clock" - Bill Haley and the Comets


Moving a big-ass boulder around town takes a long time, and is an operation performed in the wee hours of the night.   And besides, if MJ were still with us, he'd probably buy a Levitated Mass of his own.

Break off a piece of the surface of the planet and fault it a hundred miles to be displayed at a museum? Well, whip out the cardboard, 'cause here's some breakdance classics to celebrate L.M. Rock, yo!

You're sure getting one.

Props to fellow local blogger (and Tweeter) Will Campbell who chose this '90s breakbeat anthem as LevMass' theme song. And look for him doing a time-lapse video of the move.

Can you feel the excitement in the air? Levitated Mass its just about to arrive at LACMA, with a large crowd gathering there for its much-heraleded arrival. And can you imagine those throngs of Angelenos (or at the very least, LACMA staffers), in unison, doing a "Stomp-Stom-CLAP" and chanting, "We Will, We Will ROCK YOU!"?

The big moment has arrived! It's a party atmosphere here at LACMA! This Party Rock is definitely in the house tonight! What better song to celebrate than this dance track fro, Los Angeles' own LMFAO? The Militant expects you all to be shuffling. SHAKE THAT!

Awesome list (and thanks for the props). Another song just came to me: Dylan's "Everybody Must Get Stoned."

That Billy Squier video kills me every time (yeah, I've actually watched it more than once, cuz I just can't believe Billy's freaky dancing...it's said that video killed his career. I still love it!). Don't forget Scorpions' "Rock You Like A Hurricane".

How funny would it have been if that rock, upon arriving at LACMA, had just fallen to pieces? Sorry to be a buzzkill.

The "Can't Stop The Rock" - Apollo 440 song was the one stuck in my head while chasing this thing all over town.