Public Militancy 101: The Militant Steps Out Of The Shadows

Since The Militant Angeleno began his blogging endeavor nearly five years ago, from the get-go he sought out to be a mysterious, anonymous figure. 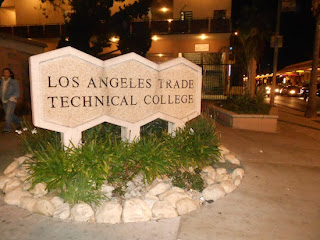 Always dressed in his camouflage garb, he is able to disguise himself as an everyday Angeleno (whatever that may or may not look like) and easily blend into society. You may or may not have met him before!

On The Militant’s first anniversary of his blog, he revealed what he looked like – at least from behind his bandana mask.

He may or may not have revealed himself to a select few native Angelenos who have earned his trust. Last summer, he even treated three loyal readers of this here blog to a free Dodger game, and they got to meet The Militant himself (he still maintained a semblance of his anonymity though).

But The Militant had always wanted to know what it would be like if he presented himself to a group of people in public.

This past Thursday, he finally got that chance, thanks to one of his loyal readers Tafarai Bayne, who gave him the opportunity to sit on a panel of bloggers for Los Angeles Trade Tech College’s CP10 Social Media: Power and Culture class, taught by Bayne and Will Coley. 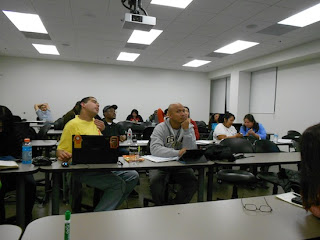 The instructors and the class of about 20 students asked the panelists questions about how the bloggers started out, why they decided to blog what they do, what sort of editorial decisions go into making their blog posts, and the topic of content ethics (e.g. crediting photos, the legality thereof and related issues like fair use and meme parody versions).

One of the students even asked The Militant straight-up why he is anonymous, and why he refers to himself in the third person. If you’ve been reading this for a while, you probably already know the answer to that one, right? Militancy 101!

The Militant also shared the background stories behind some of his recent posts, like the South Los Angeles Wetlands Park post, where, after doing errands in the area, decided to just roll through and experience the park for himself; and the Wilshire/Vermont Metro station cell phone post, which was originally intended to be written about several months ago, but The Militant decided to just write about it this week.

As for anyone concerned about whether The Militant finally revealed himself or gave up his anonymity, none of them happened. The Militant didn’t have to give up a thing. Also, he didn’t reveal anything about himself that he didn’t already reveal on his blog if you pay close attention. Though one student asked him a question about whether he had any previous professional writing experience, and he may or may not have had an answer to that. 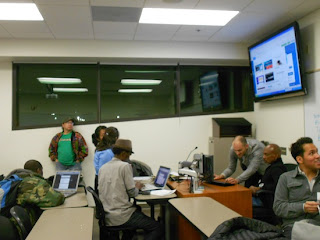 The Militant had a great time, and the fellow bloggers there were very cool folks who dropped some serious knowledge themselves. Jorge Rivas from Color Lines mentioned that it’s his blog’s policy to spend half an hour writing the headline for a story that took an hour to write, which one of the instructors found fascinating (In The Militant’s case, he won’t even start on a blog post unless he’s thought of some sort of witty/pun-filled/pop-culture-referential headline).

After the panel, some of the students stayed to set up their Tumblr accounts (pictured right). The class, which had been going on for about a month already, explores other facets of teh social media realm in other weeks, and a few of the students are considering embarking on their own blogs.

The Militant sincerely hopes he’s inspired the bloggers of tomorrow (or at least next month), and that they employ their own elements of Militancy in their work!
Professor Militant...hmmm…

On another level, it was totally awesome to interact in person with actual people, many of whom stared at The Militant, most likely wondering, “WTF does this guy think he is?”

This may or may not open up other opportunities in the near or far future to do more public appearances! The Militant has always wanted to put on a group bike ride and visit some of the actual places he’s written about! Would any of you dig something like that?

The Militant thanks fellow bloggers Rivas and Freemon for the privilege of sharing our knowledge and experiences, and to instructors Bayne and Coley and the students of the CP10 class, thanks for an unforgettable first-time experience!

The Militant would also like to thank Los Angeles Trade Tech’s security officers for not giving The Militant a hard time as he sauntered through campus in full Militant gear! He really appreciated that!
Commandeered by Militant Angeleno @ 8:42 PM

"The Militant has always wanted to put on a group bike ride and visit some of the actual places he’s written about! Would any of you dig something like that?"

LOVE that you went in disguise.

Walt: He had to! Otherwise he'd be nekkid!