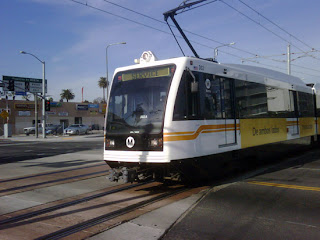 "The Metro Expo Line may or may not open this Spring."

That was not a mere trademark Militant Angelenoism™, but a statement of fact, as The Light Rail Line That Has No Actual Opening Date has endured delay after delay after delay. It was probably assumed that the Phase 2 segment from Culver City to Santa Monica would open up even before the first part.

The time to worry has ended at long last, as Metro took a bunch of politicos on the train on Friday and announced that, yes, Virginia, The First Metro Rail Line Not Named After A Color is finally opening on Saturday, April 28, 2012.

Transit fans will pop open bottles of champagne, Libertarians and Bus Riders Union-types alike will roll their eyes and curious Angelenos from East to West will take to the rails a little over a month from now.

It's a pity, nay, a DAMN SHAME though that the trains for The Other Blue Line won't even be open for the Los Angeles Times Festival of Books at USC, with the Expo Park/USC station, virtually ready-for-business, standing just yards from the nearest booth like some sort of cocktease. Visitors will no doubt grumble at not just paying the $20 parking fee, but spending a long-ass time queuing to find it. But maybe that was all intentional...

Maybe Metro should run express preview trains from the 7th St/Metro Center and La Cienega stations only during festival hours to USC. What a concept, huh?

Surely that won't happen, since such an idea is too Militant for any local body to fathom. Sigh, oh well.

Speaking of gripes, whatup with the Expo Line's promo campaign? 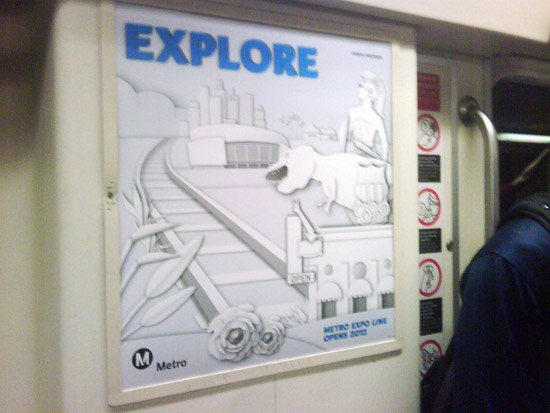 "Explore." With a coloring-book drawing of some of the line's nearby landmark icons as drawn by a middle school art student. Um, wow. Dude, the Metro Gold Line's "Discover Gold" campaign was waaaay slicker. This is probably the most-anticipated light rail line in the entire system and this is what Metro is using to try to get people to ride it?

But who is The Militant kidding, Metro could use a picture of a cow turd and he'll still be riding the thing.

So here we go. You know the drill: The system maps in the trains and stations get changed, and come 4/28, loooooooong-ass lines will be forming in the 7th Street/Metro Center and La Cienega stations. There will be live music, booths with Metro swag and the inevitable free shuttle bus that will carry passengers who don't want to wait in Disneyland-like lines for their train ride back. And The Militant may or may be there, just like he has for every Metro Rail line and extension opening since The Metro Blue Line opened nearly 22 years ago. It's that time again, folks. He's glad to see it all unfold before his very eyes.

Commandeered by Militant Angeleno @ 1:55 AM

Wish I could be there but I will be back in Los Angeles in June and one of the first orders of business is a ride to Culver City for my usual appointments with the art people there!