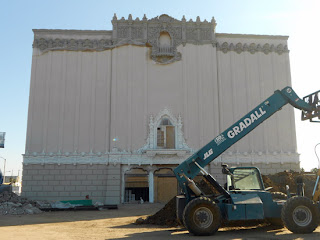 The Militant took the (M) Gold Line all the way to East Los Angeles on Thursday, bike in tow, and after disembarking, he rode straight down Atlantic Boulevard. He was on a mini-adventure to go clothes shopping (The Militant doesn't mind revealing that he buys his threads in The Eastside).

Riding down Atlantic, he passed by some scenes that were quintessentially East Los: A middle-aged veterano riding down the street in a lowrider bike, a dude driving a car with a large Lakers "L" logo emblazoned on the driver's side door. And why hasn't this place been incorporated into its own city yet?

The Real East Los Angeles isn't really the rough-and-tumble vato kingdom the mainstream media wants you to see. It's actually part-urban, part-suburban, part-small-town, part industrial, with some historic buildings, such as a seemingly random art-deco structure that's a mini-market in its current life.

Speaking of history, The Militant passed by a rather imposing building on Whittier and Atlantic that caught his eye (pictured above).

It was the Spanish Baroque-Reviaval Golden Gate Theater, once a 1500-seat grand playhouse and silent film palace built in 1927.  It was part of a complex called Golden Gate Square, surrounded by a mixed-use apartment and retail structure called the Vega Building (pictured right), which ran throughout the southwest corner of the intersection (The top facade of the Golden Gate Theater can barely be seen above the Vega Building's roof, just left of the central tower structure).

Though the theater's marquees were located on the street, the actual venue was situated in the middle of the block, separated from the Vega Building by an outdoor courtyard.

In the 1970s, the theater started screening peliculas en español, up until 1986. The next year, something called the Whittier Narrows Earthquake happened, and the Vega Building was heavily damaged and later condemned. It was razed in 1992. The property owner at the time even attempted to remove the theatre from the National Register of Historic Places, but the County Board of Supervisors and the Los Angeles Conservancy successfully saved it from the wrecking ball. 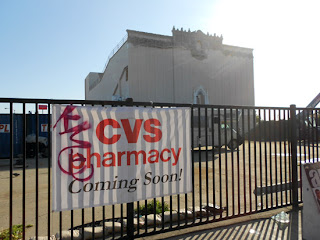 The building sat vacant for nearly 20 years when the current property owner made a deal with CVS Pharmacy to put a store there, where current construction is occurring to make that happen. Okay, kinda weird, but if you look at the 50s-era photo of the Vega Building above, you'll see that there was a drugstore there back in the day. Sooooo...

Fortunately, there is strong interest to return the building to its theater origins, and its future life as a 24-hour drugstore will only be a temporary chapter of the building's storied history.  The Los Angeles Conservancy reportedly successfully lobbied to have the drugstore maintain visual elements of the theater, such as the high ceiling and balcony, and other elements, such as the original concession stand, were removed and stored for future use.

Riding father south on Atlantic, The Militant finally reached his shopping destination: The Citadel Outlets. Not letting the minuscule and tucked-out-of-the-way bicycle parking bother him (at least it was there, though), he went on to a few unspecified stores to get some of the latest camouflage fashions for Spring. 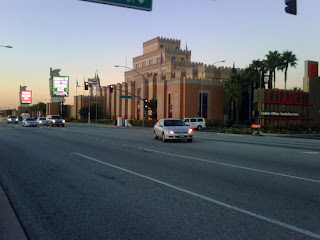 Incidentally, the very place The Militant shopped in, is itself an example of adaptive reuse. Originally built (You natives/long-timers who already know the story can skip this part...) as the Samson Tire and Rubber Company in 1929, it was the largest single manufacturing building (1,750 feet long) west of the Mississippi, and along with the Firestone (so important, they named a street after it) and Goodyear plants in the area, helped make Los Angeles the largest tire manufacturing city in America (tied neck-and-neck with Akron, Ohio). Themed like its namesake historical figure, it was designed like an Assyrian palace, with motif images of griffin and Assyrian/Babylonian figures. In 1962 the company became Uniroyal Tire Company, which operated the plant until it closed in 1978. Like the Golden Gate Theater, it was also a late-1920s structure, listed in the National Registry of Historic Places and then languished for years as a vacant structure before it was repurposed as retail space (Citadel opened in 1992). Unlike the theater, though, only the freeway-facing wall and central structure were preserved. But hey, that's what matters, right?

Now it's got big-ass video screens to distract drivers on the 5.

After The Militant finished his shopping trip, he rode back towards the Gold Line station. Just a few blocks north of The Citadel, he happened upon this building, alongside the nearby railroad tracks... 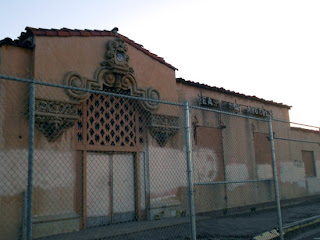 It's the old Union Pacific Railroad East Los Angeles station, also built in the late 1920s (1928) and in operation until 1971, when Amtrak took over the Union Pacific's passenger operations. In the '70s and '80s, the station housed the railroad's credit union offices.

Since then, the building has been dormant, and falling apart. Metrolink originally considered re-using the station for commuter rail use (and it has the right-size of a parking lot for it), but it cost a lot less to build a new station a few miles east than to restore the old one. There have been no plans to restore the building, and likewise no plans to demolish it either.

If any building here in East Los Angeles is a candidate for adaptive reuse, this one is it. So what's it gonna be? Museum? Restaurant? Community Center? A Wallgreen's?

Only time will tell.
Commandeered by Militant Angeleno @ 5:03 AM

Also helping to keep the Golden Gate Theatre around is the Los Angeles Historic Theatre Foundation, LAHTF.org. The LAHTF have been returning frequently to see how things are going. I was there just last Thursday and saw the restoration of original light fixtures, as well as most of the plaster details.
The owner is doing exactly what the county required of him thanks the Chattel Architecture, the firm the Los Angeles Conservancy hired.

I will be adding new photos online soon here but old ones are there to view now:
https://sites.google.com/site/losangelesmoviepalaces/golden-gate