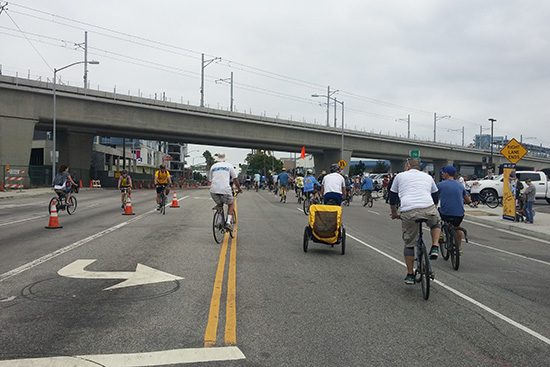 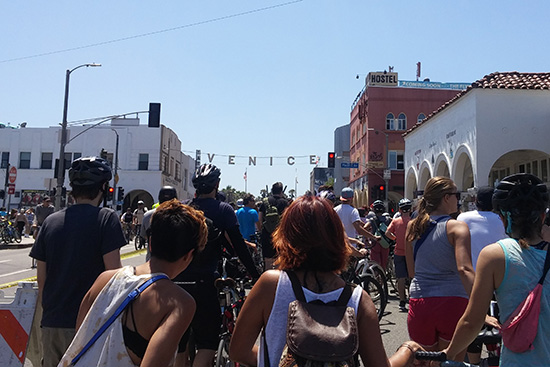 The Militant so far has a perfect 14 out of 14 CicLAvia attendance record, and having gone though this thing that many times, it can certainly feel nearly routine. He most certainly had a wonderful time (most likely because he showed up at the route relatively early and did not have to "rush the route" as he had to do in the past), but a certain well-publicized controversy that got diffused in time probably added some tension and drama to the mix, along with a Hollywood Happy Ending. And this CicLAvia was also great due to the fact that, hey, we were all headed to the beach again.

And sure, the day began cloudy and overcast, but by the afternoon, the day of the week lived up to its name for the 14th consecutive time, burning off the clouds to reveal a virtually cloudless, blue Summer sky, which wasn't even that hot for an August day.

The Militant hates clickbaitey listicles, but most people don't read stuff on the Internet these days that's not formatted in list form, so, he grudgingly presents these Ten Reflections on this past Sunday's "Culver City Meets Venice" CicLAvia: 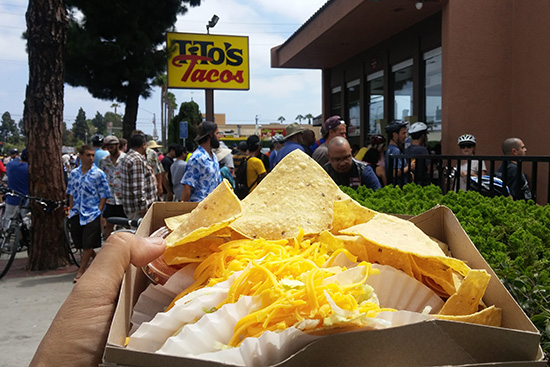 Certainly what would have been the proverbial Elephant In The Room was the much-publicized ranting of Tito's Tacos that doth protested the CicLAvia route running in front of their front door, only to do an about-face two days before the event, because maaaaybe they suddenly discovered that the negative backlash would cost them business either way.  At any rate, despite people not getting the update and still sharing two-days-old news articles on their social media feeds, Señora Lynne Davidson did not sue Culver City and the event went on without a hitch.

And as you can see by the photo above and below, the crowd was, at worst, equivalent to a normal weekend day there without an open streets event. 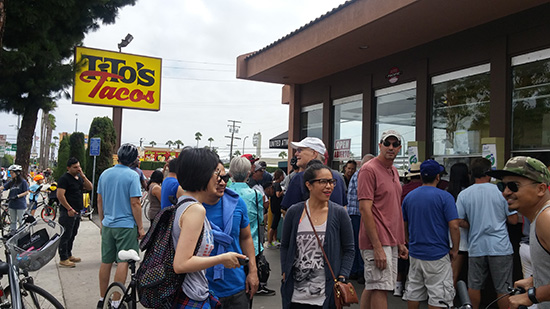 There were bike racks provided by "Some Non-Profit Organization" on the Tuller Avenue cul-de-sac adjacent to the Westside crunchy taco institution, as well as signs on Sepulveda directing regulars on cars to the alley to access the Tito's parking lot (like they never used the alley before). 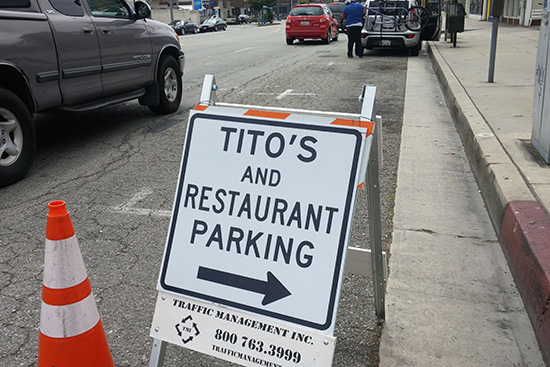 Sra. Davidson's fears of not only a lack of customers (their parking lot was just as full as it is during the other 364 days of the year that there is no CicLAvia on Washington Place), but of customers not purchasing insanely mass quantities of tacos in those cardboard boxes, were unfounded, as many CicLAvians arrived in groups of their own and purchased tacos in mass quantities.

However, upon watching the KABC news report, they quoted Sra. Davidson as having a "let's wait and see" attitude regarding the raw numbers from Sunday. Hmph.

You know, in a way, The Militant is kind of glad Titogate happened, because it set a clear precedent for a well-known local institution (that no doubt has name recognition) having initial concerns about not being able to get customers during CicLAvia. Granted, her initial impression of the event probably resembled a marathon or a bike race, not the reality of CicLAvia that we all know and love. But perhaps from here on out, this well-publiczed precedent set by Tito's Tacos can be shown clear to any future local institutions that find themselves on future CicLAvia routes.

And who knows, after all the numbers come in, Señora Davidson will sue on the grounds that the next CicLAvia route won't be going in front of her eatery. 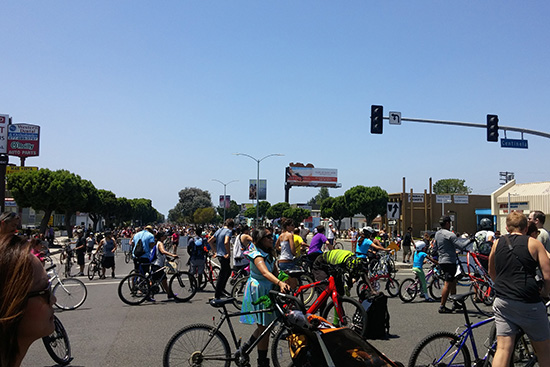 Remember back in April, 2013 when we had that big-ass 17-mile CicLAvia where we all rode from Downtown to Venice Beach? And how, despite how totally awesome that was, that it kinda sucked because CicLAvians were only allowed to use the Westbound lanes of Venice Boulevard?

This time around, CicLAvians got to use BOTH sides of Venice Boulevard (mostly), eliminating that crazy bottleneck of traffic for most of the route. Of course, west of Lincoln, it was the same old thing as two years ago, though at least for just a short segment of the route: 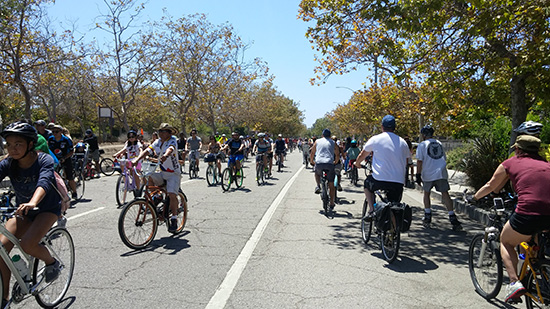 3. Stand Up And Be Counted

Did you see these things along the route? 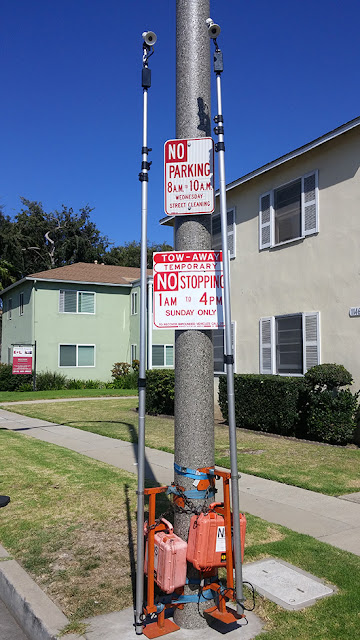 Since these instruments did not appear to be releasing poisonous chemicals designed to kill every CicLAvian on the route (removes tinfoil hat), these appeared to be counting devices of some sort to count how many participants were on the streets at CicLAvia, to be compiled later by some expensive Beverly Hills accounting firm (or most likely by CicLAvia themselves, in cooperation with UCLA or another local educational institution). We wait the number for this one!

CicLAvia The Organization likes to stress the fact that the event is not just for bicycles, and smaller routes like Wilshire Boulevard and the short-but-sweet Pasadena route last May certainly brought out more non-cyclists, but the non-bike minority seemed even smaller this time around. 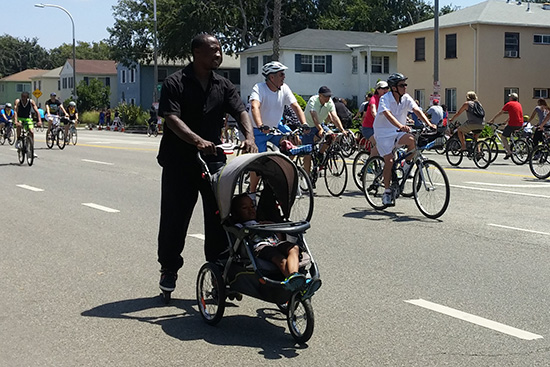 5. People On Skates Pushing Strollers At CicLAvia Are A Thing

For the non bicycle-riding CicLAvians, The Militant did notice a number of people pushing strollers while wearing rollerblades or roller-skates like this dude above along Washington Place. The Militant has never really seen that many people do that in previous CicLAvias. Count it as a thing now. 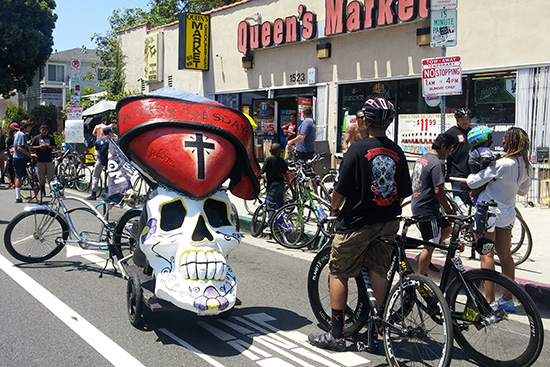 Twice during CicLAvia, The Militant happened to ride near the Midnight Ridazz Taco Tuesdays ride contingent, which featured a trailer adorned with a sugar skull y corazon y sound system blasting their Taco Tuesdays Theme Song, which The Militant can't seem to get out of his head.

Arriving at Venice Beach, The Militant met up with one of his operatives at the route's end, wanted to get something to eat, but they were local enough not to fall into the tourist trap that is the Venice Beach Boardwalk. So they opted for Abbot Kinney Boulevard, just a short distance east. Although this street was not part of the CicLAvia route and had normal automobile traffic (as well as detoured Metro Bus lines), it might as well have been as the street was crowded with CicLAvians also patronizing their restaurants and shops. Certainly, past CicLAvias have had participants spill over into non-route streets, but this was the first time The Militant has seen this phenomena in such an obvious form. Be on the look out for more of these in the future. 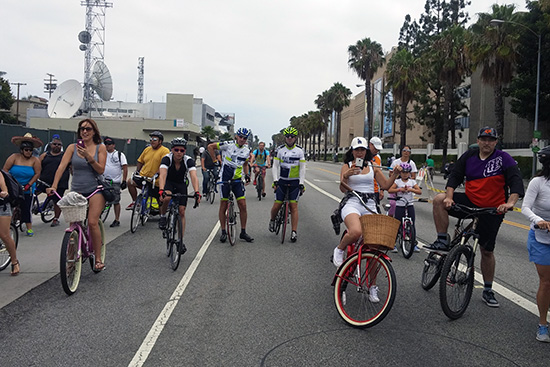 Thousands of people rode by Sony Picture Studios in Culver City, and the corporation gets props for being listed as one of the event's sponsors, but The Militant didn't see much participation from the media giant beyond that. No Sony employees riding the route? No celebrities? Not even some gratuitous promotion (and maybe some swag) of their films and TV shows? It's strange, stupid, yet totally not surprising for this Los Angeles native to see how disconnected "Hollywood" is from the community.

At the same time, down the street, the NFL Network had a banner saying "The NFL Network Supports CicLAvia, but they were not listed as one of the event's sponsors, nor was there any sort of interactivity from them outside their office (Best practice: Coca-Cola giving away drinks outside their Central Avenue bottling plant in previous CicLAvias). Apparently the NFL Network was special enough to have their own private auto-acces barrier driveway -- the only business along the route to have one. Wait, it's because we don't have an NFL team, right?

Many of you read The Militant's #EpicCicLAviaTour post from last week to gain knowledge and familiarity with the route, and some of you even tried to visit all 25 sites. And some of you really had fun with that. This makes The Militant smile (behind his bandana mask, of course).

The next CicLAvia is just two months away! It's going to be a familiar route for us CicLAveteranos. It's time to flip the scrip. The Militant may or may not try to walk the whole thing. It will also be a celebration of CicLAvia's 5th anniversary. It's definitely a part of our city and it's still growing.

Speaking of which, how bout some new routes? Venice isn't the only beach we have. How about a CicLAvia in San Pedro (how about ending the route at Point Fermin Park)? Or a Beach Cities CicLAvia?