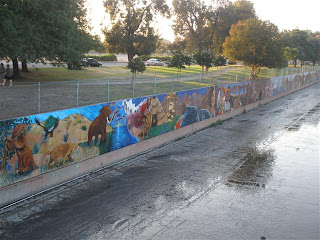 The Militant spent most of his Monday in North Hollywood, visiting an unspecified operative about a mile from the (M) Red Line terminus, which he took along with his bike. After the operative he decided to embark on a bike ride around the place for the next nine or so miles.

Though it was the middle of Summer, it was uncharacteristically warm (as opposed to freaking SFV hot), and by the time the Militant left the operative's house at around 6 p.m., he was more struggling to feel the warmth of the Sun's rays rather than submitting to them (remember, the Militant is solar-powered, after all).

He rode west on Burbank, then up the Lankershim diagonal (which is in serious need of a re-paving, at least from a cyclist's perspective) until Victory, then followed the Sun west to Coldwater Canyon, where he went shopping at an unspecified store.

Heading south on ColCan, in what may or may not be North Hollywood (technically Valley Glen, though isn't that kinda redundant?) he happened upon the Tujunga Wash, one of the Los Angeles River's major tributaries. You may or may not know that the westernmost wall of the Tujunga Wash is adorned with one of the longest (at 2,754 feet) murals in the world - The Great Wall of Los Angeles (pictured above). Created in the mid-late 1970s by Venice-based community arts nonprofit SPARC (the Militant rode by their arts center on a Westside ride a couple years ago), the mural details Los Angeles history from 20,000 B.C. to 1984 (though everything from the 60s to '84 has been abruptly summarized). Most of the wall depicts the achievements and struggles of our ethnic and immigrant communities during the 20th century. The mural will be undergoing a three-year renovation which will also include a more detailed update of local history from the '60s to today.

Interesting thing, as the Militant crossed Burbank Blvd on his bike, he couldn't help but notice the cars making a left turn westbound from Coldwater Canyon seemed noticeably less courteous and considerate to this cyclist than other parts of the City. Hmmm. So there you go, Westsiders, Eastsiders and Centralists - you all treat cyclists much better than them Valley folk!

After evading being mowed down by SUVs, the Militant continued on his way south and headed due east on Chandler, with the whirr of silver-colored Orange Line buses passing him every few minutes. Returning back to Lankershim, the question went before him: Head back to the compound now on the subway, or bike down to Universal City? 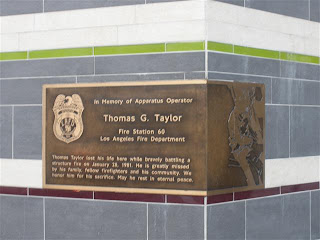 The latter won out, of course. But not before noticing a little something in the NoHo Commons building: A memorial (pictured right) to LAFD firefighter Thomas G. Taylor, who died in the line of duty while fighting an arson fire on this location (then Cugee's Restaurant) in January, 1981. People put their lives out on the line in this City. Recognize.

Just south of there, the Militant, in search of any hole-in-the-wall sammich shop, happened upon a curious structure spanning Lankershim. He couldn't quite make it out. It said... 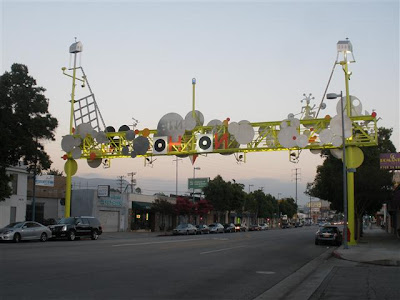 "OH ON" - But with the "N" reversed - Must be some Russian thing. The Militant wasn't aware the Russian community in North Hollywood was that big. 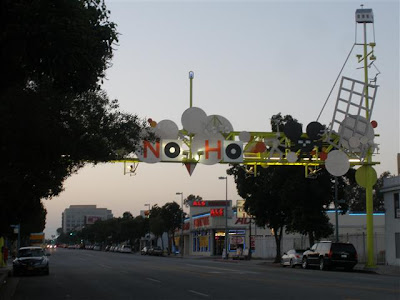 This must be the infamous No Ho Gateway, erected a year ago (No, this wasn't the first time the Militant saw it, but let's just pretend that it was). What does the Militant think? It's...interesting.
But in all seriousness, it is art, and one of art's responsibilities is to provoke, and that it does. Besides, the locals hated this thing in Paris when it first got built, and much more recently and closer to home, a lot of Angelenos initially weren't so hot on this thing, either. But both are now icons. So if history is an indicator, eventually, people will tolerate and eventually accept the thing, just you watch.

Failing to find a suitable sammich shop, the Militant settled for Pita Fresh on Lankershim, where he found him a-good-but-not-awesome (because there's better pita joints in the areas not too far from the Militant's compound) chicken kebab pita plus a drink for $7. Funny thing, most of the people at Pita Fresh were not chomping down falafels, but visiting Facebook on their laptops (they do have free Wi-Fi though).

Soon after the Militant and his bike descended the elevator taking him deep below the ground at Universal City where he boarded the southbound Red Line train and spotted a dude in his car who looked a lot like Sam Hall Kaplan. But like any other people who may or may not be recognizable figures, the Militant just dismisses the person as some random dude who just happens to resemble the local writer and reporter.
Commandeered by Militant Angeleno @ 11:47 PM

Dang, you missed out! Some of the best sandwiches in town are right across the street from Pita Fresh over at HealthyCA. Little bit hard to notice, their signage isn't that great, but it's worth finding because everything there is delicious. No I don't work for them, I just genuinely love their food!

Foodeater: Thanks! But this was at around 8pm already. The Militant may or may not have seen the place across the street, but it seemed to be closed already. Will check 'em out next time he's in the area!

Ah, The Militant is correct, they close at 6pm and are closed weekends. Inconvenient hours indeed, but the food is worth the hassle for next time :)

HATE that NoHo arch. I've a mind to tie one end of a rope to it, the other to one of the Dagmars on the front bumper of my Cadillac, and floor it in reverse (better gearing in Hydra-Matic "R" for pulling things out of the ground).