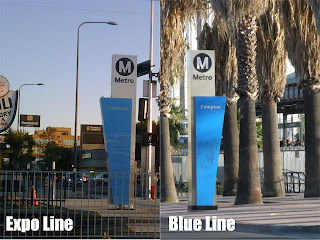 It may or may not be obvious that The Militant has an obsession with signage, but he was quite excited this past week upon doing his Militant Surveying missions that the under-construction Metro Expo Line has recently been sporting its 12-foot tall station pylon signs at several of its stops.

In addition to running test trains on the tracks, the installation of signage is one tell-tale sign that construction is nearing its end and the open-open-opening of the new 8.5 light rail line is imminent.

However, The Militant noticed something peculiar.

You see, nearly all Metro Rail stations sport these signs, comprised of a rectangular aluminum tower with the (M) logo and a colored wedge bearing the station name, with the color representing the rail line. Of course, this is not an exact science, as all of the (M) Purple Line stations still bear a red wedge, and transfer stations like Union Station and 7th Street/Metro Center lack them altogether (it seems that Metro doesn't know how to fit more than one color on the wedge for some reason...).

But even more peculiar is the wedge color of the new supposedly "Expo" Line: They're blue.

Now The Militant doesn't have a problem with the color blue, lifelong Dodger fan he is, but...as you can see from the picture above, they're the exact same shade of blue as the existing station signage as the (M) Blue Line (Okay they might look slightly different in the photos since they were taken at different times of the day, but trust The Militant on this one).

Now we all know that "Expo" has nothing to do with color (unless you're referring to these things), but many iterations of Expo Line imagery have used the color teal or aqua. The official website of the line even sports this color in some of the graphics.

Of course, the new line will share some trackage and two stations with the Blue Line.

So perhaps, there really is no Expo Line. This is a Blue Line extension. It certainly was one when it was originally planned in the early 1990s: 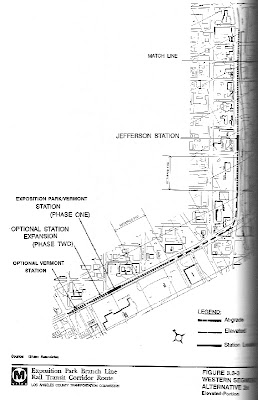 (Click to see sharper-resolution version of this image)
This image, scanned from the October, 1992 Final Environmental Impact Report of the "Exposition Park Branch Line Rail Transit Corridor Route," depicted a 1.8-mile branch of the (M) Blue Line that veered off Washington and Flower, and headed south on Flower and west on Exposition until Vermont Avenue.

There were stations planned at 23rd Street, Jefferson Blvd and Vermont Avenue, with an optional station by the USC campus. Because of the 110 freeway offramp and possible interference by the Los Angeles Marathon route that used to go through the area, an underground section was planned between the Jefferson and USC stations. Sound familiar?

That line was originally planned to open in 1996, with an extension into the Westside a possibility that would require further study blahblahblah.

Eventually, as you know, that became the line that is being finished today, which may or may not open this November.

So there you go, friends. The Expo Line. Except, there really is no "Expo Line." It's really an extension of The Blue Line. The signs tell all.
Commandeered by Militant Angeleno @ 12:31 AM

Nice Blog. Customized retail displays are the most efficient investment to make when you goal at highlighting brand merchandise and attaining increased margins.

Those of us in exile are counting on the Militant to keep fighting the good fight for public transportation...I heard they lifted the ban on bicycles during the rush hours on the Metro line. Did the Militant have something to do with this?

The Maker Monk: The Militant has so much work on his plate, he can't be everywhere (or can he?), but he can't take credit for the bike ban lift, although he may or may not know people who were active in advocating for it. Nevertheless, it's great news!

The MTA has run out of usable, noncontroversial colors. I think MTA has "painted" itself into a corner when it comes to naming subsequent lines. It seems they would need to shift to the London Model, in which patterns, and names, are used to differentiate the lines on the famous Tube map. Circle Line, Victoria Line, etc., and colored patterns. It would be interesting to solicit comments on what would be appropriate "name" lines for any future L.A. routes. "Expo" seems nonsdescript, nonhistoric and nongeographic. It's a reference to Exposition Park, no? It would be great to use the names of historical figures from L.A., such as Pico, Huntington, (Chandler!?) but since we use those names on streets, that would be confusing. Any ideas on what would be appropriate names? Thanks for the post!

They do this in San Francisco with MUNI and it works fine.

@Steve- I believe Expo is actually a reference to Exposition Blvd., which the line follows between Exposition Park and (hopefully) Santa Monica.

Actually the Expo line will be the Gold line once the Regional Connector is built, and will travel from Santa Monica to Atlantic Blvd. in East Los Angeles.

Anonymous: Actually Metro DID try to adopt a lettering system for its Metro Rail lines a few years ago (it used to appear on train schedules and maps), but no one caught on to it and Metro gave up using it. The colored lines have existed for some 20 years and no one plans to stop referring to them as such.

There are many NYers who still refer to their subway lines as "IRT/IND/BMT" even after the letter/number system was adopted.

My theory is that these are Blue-Line blue so that when the Downtown Connector is finished, they can trade them for the gold pylons from the northern half of the Gold Line, thereby saving a bundle of money when they reconfigure the Gold/Blue Line routes as Eric Tooley mentioned above.

Almost seems too sensible, though...

What happened to the Aqua Line? The color was thought-up by The People, so the powers-that-be call it the Expo Line.