A Monumental Ode To The Beach Boys in Hawthorne 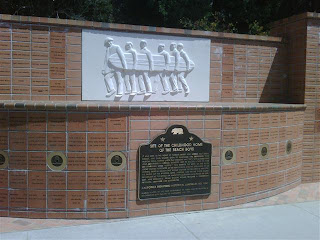 The Militant was in the Hawthorne area one day, not very far from the Crenshaw (M) Green Line station, when he saw a sign along 120th Street pointing to a "Beach Boys Monument."

But it was there, sandwiched in a little residential block between the 105 Freeway and Hawthorne Municipal Airport, that a curious red brick mantel-like landmark (dedicated in 2005) on the corner of Kornblum Avenue and 119th Street bears homage to its most famous native musical sons.

The inscription describes that on Labor Day weekend of 1961 (that's 50 years ago this weekend!) the brothers Carl, Dennis and Brian (no, not that one, stupid Giants fan) Wilson, along with their cousin, Mike Love and friend Al Jardine, got together on this site - the location of what was once the Wilson family home - to record a demo tape of their debut song "Surfin," giving birth to  a group called The Pendletones, who eventually renamed themselves The Beach Boys.

The Wilson family household at 3701 W. 119th Street no longer stands there -- it was razed in the 1980s to build the Century Freeway (You could literally create another city if you put together all the homes, businesses and institutions that were cleared away to make the freeways...Militant sigh). 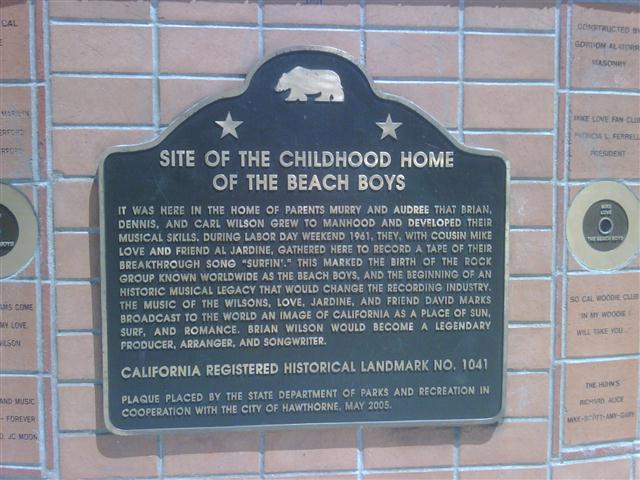 The group, as you all know, went on to make 36 Top 40 hits and get inducted into the Rock and Roll Hall of Fame in 1988. The Beach Boys are our Beatles, they defined a sound and style that was uniquely Los Angeles, uniquely Southern California. And they did so much more beyond the surfing boy imagery (Apparently the late Dennis Wilson was the only member of the band who actually rode the waves...).


So on this Labor Day weekend, don't just do the same old same old late-summer ritual like you do every year, recognize the half century of our boys from Hawthorne -- do like Randy Newman says and crank up the Beach Boys, don't let the music stop. And if you're in the area, stop by The Beach Boys monument in Hawthorne...you can even take the (M) Green Line there.

Commandeered by Militant Angeleno @ 5:45 AM

Thanks for posting this! I visited the site several years ago (wasn't easy to find) after having read a biography of the BBs. Also found the Wilsons' first SoCal House, in the Inglewood area, I believe. They are major piece of California history and in fact deserve a much more prominent monument somewhere, perhaps on the beach the South Bay somewhere, or outside the Capitol Records tower.