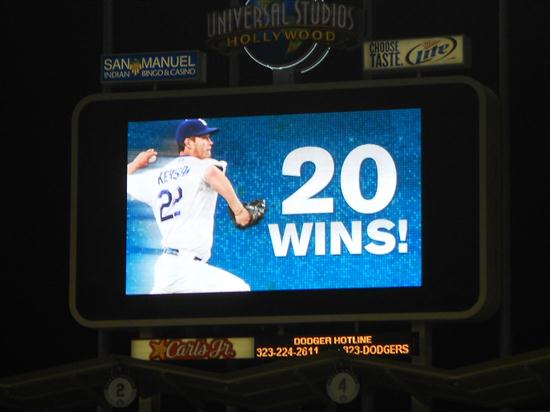 The Militant was there on Tuesday night to witness the first Dodger pitcher to get his 20th win since 1990. Back then, Clayton Kershaw was still in diapers. He's also the first Dodgers pitcher since 1946 to defeat the Giants five times in one season, and defeated two-time CyYoung winner Tim "Timmmeehhh" Lincecum in four out of four matches.

You all should know that you can't spell "CLAYTON" without "CY."
It was also UCLA cap night, and the Militant may or may not have worn his. Despite being at the game (the turnout on Tuesday was actually fairly decent, judging by the slowness of the Dodger Stadium Express bus...), The Militant will let you all know that he still made good on his McCourt Boycott: He bought his Field Level tickets from a seller near Azucsagna who got an in with a sponsored ticket source, and got them for $15 each(!). The Militant also did not buy any food at The Stadium and took the Dodger Stadium Express bus. So Tuesday night's game by the numbers: Dodgers 2, Giants 1, Kershaw, 20-5 and Frank McCourt gets $0.00 from The Militant's wallet!


Commandeered by Militant Angeleno @ 10:16 AM

A few of my friends went and got those neat hats. I want one now too. Congrats to Kershaw!